The Bucs Training Camp Diaries are an annual feature on PewterReport.com and we have two gems this year in veteran nose tackle Beau Allen, who will give PewterReport.com readers insight into the Bucs defense during training camp and the preseason, and rookie running back Ronald Jones, Tampa Bay’s second-round pick, who will offer his perspective on the offensive side of the ball.

Tampa Bay general manager Jason Licht needed to revamp the defensive line this offseason and the first free agent addition was signing Allen, fresh off winning the Super Bowl with the world champion Philadelphia Eagles. Allen, who was a run-stuffing role player in Philly, enters Bucs training camp as the starting nose tackle next to six-time Pro Bowler Gerald McCoy. At 6-foot-3, 327 pounds, Allen has the size and power to not only be a force against the run, but also collapse the pocket. Playing primarily on first and second downs, Allen notched 87 tackles and two sacks in his four years with Philadelphia, and had 20 tackles and a sack last year as the Eagles won their first Super Bowl.

Playing in the pass-happy NFC South, Allen looks to get to the quarterback more often as a Buccaneer, as the likes of Drew Brees, Matt Ryan and Cam Newton often pass the ball on first and second downs. While Allen’s roster spot is assured due to his three-year, $15 million contract that features $7.25 million in guaranteed money, he is fighting for playing time in Tampa Bay’s defensive line rotation. Follow Allen’s first training camp in Tampa Bay in his Training Camp Diary exclusively on PewterReport.com, as he and the team’s ultra-talented defensive line look to come together, rush the passer and get the Bucs into the playoffs in 2018.

DAMN, THAT GUY LOOKS LIKE WARREN SAPP
As told to Scott Reynolds

It was nice to come inside today after yesterday’s practice in pads. We’re definitely taking advantage of the indoor facility. It’s a really nice facility. Today was great, it was all about situational football – a lot of situations that don’t necessarily come up a bunch, but it’s important to practice them. You never know what’s going to happen in NFL football. A lot of last play scenarios, different kind of stuff like that, and it’s important to be clean with that. I thought it was pretty crisp today, all things considered. We had an indoor practice facility in Philadelphia, but this one is brand new. I don’t know if I’ve ever seen one quite like this. Having a full 100-yard field is kind of rare for an indoor practice field, but we have one here. And you see how tall it is, it’s crazy that the punts were still hitting the ceiling. And then to have the fans come out, even though it was a walkthrough and situational stuff, it’s fun to have people in here. I thought it was a good day today.

Yesterday was intense, especially the double team period against the offensive line. Coach Buck (Brentson Buckner) is intense. He was really getting on us, but he holds us to a high standard because we’re good football players. That’s exactly what you want. If we’re not doing the right things we need to know about it and he’s definitely going to tell us, and you appreciate that kind of coaching.

He’s fired up and we’re fired up. He cares a lot and so do we, so that’s exactly what you want out of a coach. It’s funny because He kind of lost his voice. Gee, I can’t imagine why! Coach Buck said we were soft yesterday and that’s not what you want to hear. That’s never a word you want to hear as a defensive lineman, you don’t want to be soft, so we’re going to do everything in our power to not be soft. 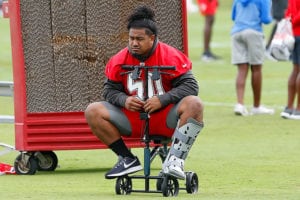 Vita Vea’s spirits are up. He’s staying on top of his rehab. I don’t really talk about injuries, whether it’s my own or anybody else, it’s just kind of my policy. But spirit-wise he’s doing well. He’s eager to learn, I’ve talked about that before, how much he cares about the game and you never like to be out. He doesn’t like that. He’s staying on top of it and doing what he needs to do from a mental aspect. There’s a lot of coaching to be had when you’re not in there still. You can learn from other guys and see it on tape, and even when you’re not in there there’s a lot of stuff you can do and he’s doing that. I’m anticipating him being ready to roll as soon as he’s able to.

Vita is in a boot and was out on a scooter the other day and you can see where Vita has been on the practice field because there’s little ruts in the grass!

Stevie T (Tu’ikolovatu) is playing very well in Vita’s absence and that’s what’s nice. We have a deep defensive line and when you get that rotation you get guys a lot of different reps and when someone goes down someone else steps up. That’s how it is in the NFL, and you see that every single week. Stevie T’s done a really good job. He’s a powerful guy. You’ve just got to get him to release that power and he can make a lot of great plays.

When Stevie T really gets off and gets his hands on you he’s a powerful guy. He can rag-doll guys. I think one thing about Stevie T is that he never complains. When someone goes down like that you get a lot of reps and I think he’s done a really good job of taking advantage of those, so it’s been really fun to watch him this past week. And no, I don’t know how to pronounce his last name – that’s why I call him Stevie T!

We had a little camp fight the other day (on Sunday between right guard Caleb Benenoch and defensive tackle Mitch Unrein) Those kind of things happen in training camp, man. It’s not something new, that’s just how it is. Not really a whole lot to say about that. We get guys out here competing and we all care a lot about the game. I think those things happen and as long as it stays on the football field and doesn’t become a bigger issue than, in my mind, it’s not an issue.

The unique thing about Coach Buck and the thing I really appreciate about him is how he talks about the history of the game. The other day he was talking about (former Los Angeles Rams defensive lineman) Jack Youngblood. He’s talked about Kevin Greene – all sorts of guys. We’ve talked about Warren Sapp, obviously, and he was at practice the other day. I think that’s really cool to do – just to appreciate the players that have come before us, and what they’ve done for the game. He appreciates good defenses and that kind of thing. That’s one thing I haven’t spent a lot of time with and I think it’s important to have that kind of respect and knowledge for the game.

I talked to Sapp I think two days ago. It was awesome to meet him. It was very cool. It was funny because I didn’t know he was going to be at practice and I was walking by him and was like, “Damn, that guy looks like Warren Sapp.” And then was like, “Oh, okay. It’s actually him – that makes sense.”

It was good talking to Sapp and picking his brain a bit. He was out with us for one-on-one pass rush and that’s what you want. You want players who come back and want to come back. His mentality … everything he’s done – it’s all about respect. Everything Sapp has done for us – for the Bucs and for defensive tackles – is good, really good.

We should have never let Sapp go and kept Booger. It was definitely a money decision. We ended up trading Booger anyway for I think a No. 1 and god knows what we picked with it under Gruden or Raheem.
Love the fact that Sapp still thinks of himself as a Buc rather than a Raider.
I know Sapp was supposed to be a jerk in public to a lot of people, but I would take 21 more jerks like him if they all played like he did on the football field.

I’m going to agree with you for once Dr. d. Lol. Looking back I hated when Bucs got rid of Sapp. Booger was good not great. I’m sure it was a cap issue. I don’t know why but the number in my head was 7 million a year for raiders? Have no idea why I remember that. Seems low in today’s standards and he was HOF! Still productive but he had peaked for sure. It’s obvious Sapp still is a Buc and will be for life. He may be an ass off the field but no doubt loves the game… Read more »

In my opinion, Sapp was the greatest buc player. It so cool to watch him walk through the opposing team lines like you can’t stop me.

I really liked Sapp too, but only on the football field. He was a force to be reconed with and one of the best defenders we have ever had, but clearly not the greatest Buc ever. As good as he was on the field, and as much as he respects the game, that is just plain disrespectful to walk through another teams warm-up. I never did like it when he did that and I’m glad that he didn’t do it much, or maybe they just didn’t show it to us. Still a great player, and a part of one of… Read more »