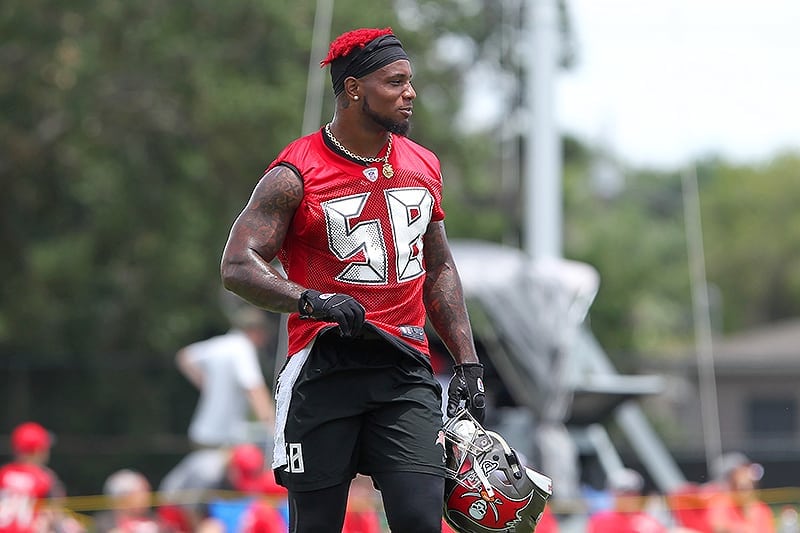 Summer is here and that means HURRICANE SEASON in Florida! Get your home and your garage doors outfitted with hurricane protection kits today. Call 866-420-DOOR or visit DGDoors.com to view Discount Garage Doors list of services and garage doors that can be installed to improve the look of your home. And remember, Discount Garage Doors offers FREE service calls. Don’t wait – call today!

The Buccaneers extended the contracts of wide receiver Mike Evans and tight end Cameron Brate in the offseason, making two of Tampa Bay’s top weapons on offense some of the wealthiest players at their positions. Tampa Bay general manager Jason Licht and director of football operations Mike Greenberg have already picked up Jameis Winston’s fifth-year option that will pay the Bucs quarterback $20.92 million in the 2019 season. Barring any other off-field incidents or incredibly unexpected downward turns in his play (see Josh Freeman in 2013), Winston and the Bucs will engage in contract extension talks next year while Licht and Greenberg their attention turn their attention to the other three key members of the 2015 draft class – Pro Bowl middle linebacker Kwon Alexander, left guard Ali Marpet and left tackle Donovan Smith.

The Bucs have $14,395,984 worth of salary cap room right now, according to OverTheCap.com. Tampa Bay will need to keep approximately $4 million in reserve for injury signings during the season. That would leave Greenberg, who is the team’s capologist, $10 million to use towards contract extensions.

Is offering an increase around $3 million per player enough of a raise to satisfy each free-agent-to-be? Probably not when the average salary per year for Alexander, Marpet and Smith will each top $10 million. Although the Bucs would like to get contract extensions done for all three players prior to them hitting free agency next March, that may not happen due to the lack of available cap space this year. So what has derailed the Bucs’ strategic salary cap plans, which dated back to last year when they were formulated? The acquisition of defensive end Jason Pierre-Paul.

The unexpected trade for Pierre-Paul forced the Bucs to take on his $11.25 million base salary and a $1 million roster bonus. Pierre-Paul actually saved the Bucs $250,000 by foregoing his workout bonus by not participating, but Tampa Bay didn’t exactly have his $12.25 million cap number in the 2018 budget despite being able to afford it.

The $12.25 million is money well spent on Pierre-Paul, who has been dominant in camp and will have a huge impact on the team’s pass rush this year, and kudos to Licht for pulling off a trade in March that nobody saw coming. But Pierre-Paul’s money was earmarked for contract extensions for Alexander, Marpet and Smith, and realistically, the Bucs may only be able to afford to do two of those before the start of the 2018 season.

Talks have begun with the agents of all three players, but the two players that could wind up with extensions this year are Alexander and Marpet – not Smith. We’ll address Smith in Fab 2, but let’s focus on the potential new salaries for Alexander and Marpet.

Drew Rosenhaus, the agent Alexander, who is coming off his first Pro Bowl, will likely point to contracts for Seattle’s Bobby Wagner ($10.75 million average), and the New York Giants’ Alec Ogletree ($10.5 million) as comps, and may even try to push the envelope by suggesting that Jacksonville’s outside linebacker Telvin Smith is a similar player with a similar skill set that also plays in nickel defense. Smith recently cashed in on a four-year contract extension worth $44.4 million that averages $11.1 million per year.

The Bucs could counter by pointing to contracts of Houston’s Benardrick McKinney and Minnesota’s Eric Kendricks, who each signed five-year deals worth $50 million, averaging $10 million per year. Tampa Bay’s Lavonte David is a more accomplished player and makes an average of $10.05 million per year. The Bucs front office might not be ready to pay Alexander more than David, who is a more accomplished player. Cleveland’s Christian Kirksey recently signed a contract extension that pays him an average of $9.5 million, and could be a comp in the Bucs’ favor.

Let’s look at Marpet. Traditionally, left guards make $1 million less per year than right guards do, but since the Bucs believe that Marpet can play both they are just looking at the average salaries of the top 10 guards. Dallas’ Zack Martin leads the way with $14 million per year, followed by Jacksonville’s Andrew Norwell, who makes $13 million per year. At the lower end of the top 10 are Chicago’s Kyle Long ($10 million avg.), Detroit’s T.J. Lang ($9.5 million avg.) and Arizona’s Justin Pugh ($9.005 million avg.). Marpet’s agent will likely try to get his client top 5 guard money, which would be around $11 million per year, while the Bucs would likely want to have him extended for $10 million or under. As previously stated, an extra $1 million here and an extra $1 million there will add up, especially over time as Greenberg and the Bucs continue to handsomely reward some of their top young talent. There will come a time in the next two or three years when Tampa Bay’s available salary cap room will be near the bottom of the NFL and not the top of the league as it has been throughout much of the last decade.

If Licht and Greenberg only focus on the extensions of Alexander and Marpet this year and split the $10 million up between the two, that could mean an extra $5 million each for Tampa Bay’s middle linebacker and the Bucs’ Pro Bowl-caliber guard. Under this scenario it would mean that Alexander would earn over $6.9 million in 2018, which would be a nice stair step up towards $10 million or more in 2019. Under the same scenario, Marpet would earn close to $6 million this year and would see a base salary jump the next year.

Now let’s take a look at Smith’s contract extension situation and the opportunity it affords the Bucs in 2019.

Lets not forget that Gholston, Grimes, and Jackson will all more than likely be gone after this season. So that will free up $25.5 million in cap space

+1
We’ll still have cap to work with at least until Jameis gets his extension. Greenberg will work his magic with the numbers as he has so far and keep us out of trouble.

You state that we have a playoff ready roster this year, yet I’m seeing predictions like 1-15 and 2-13-1. Are these writers/prognosticators that out of touch? We will be better than last year and I think we could surprise people. 10-6.

If we get through our first 3 games at 1-2 I believe we can go to the playoffs with this team, most likely wildcard cause our division is brutal. But still playoffs

We definitely have a playoff ready ROSTER, it’s a matter of “I’ll believe it when I see it” when it comes to the coaching staff putting the pieces together though. I think we’re looking at easily a 9+ win season this year

So let me get this straight, out CB’s who excelled in their previous colleges at press coverage are doing a great job covering in…. press coverage??!! If I see mike smith play these guys 10 yards off again this year he should be fired after game one.

Dude it’s so frustrating to see such an obvious flaw, and a professional coach not fix it.
I don’t care about all this nonsense coaching jargon being said. if your players excel in that role, DO IT. that simple

I’m hoping the off coverage last year was based on the lack of Dline pressure. That problem should be alleviated this year so Smitty has no reason for running that kind of coverage this year.

All these scenarios for how we pay Donovan and I’m just sitting here like, what if we don’t bring him back? How much would it cost to cut ties with this fool? If he really is a top 15 tackle in the league like Scott so desperately needs to keep reminding us, he should be good trade bait for a needy team. He’s simply not worth being paid like a top 5 lineman which is basically guaranteed to happen if we keep him. Thinking about the other players we might have to lose because wed be paying Donovan so much… Read more »

Donovan Smith is not a top-15 left tackle by any measure. That’s just crazy. He allowed more than 50 pressures last year and was dreadful in the running game. Extending or tagging him would be asinine.

let’s see what he does this year first.

MIke Smith… Please use press coverage more. Don’t reinvent the wheel. Just let your players do what they do best.

MIke Smith… Don’t reinvent the wheel. Just let your players do what they do best.

I agree we should lock up Kwon and Ali, the jury’s still out on D Smith though. I say we let him prove it this year and if he does, tag him for another “prove it” year before extending him. If he doesn’t vastly improve this year, cut ties and draft another LT