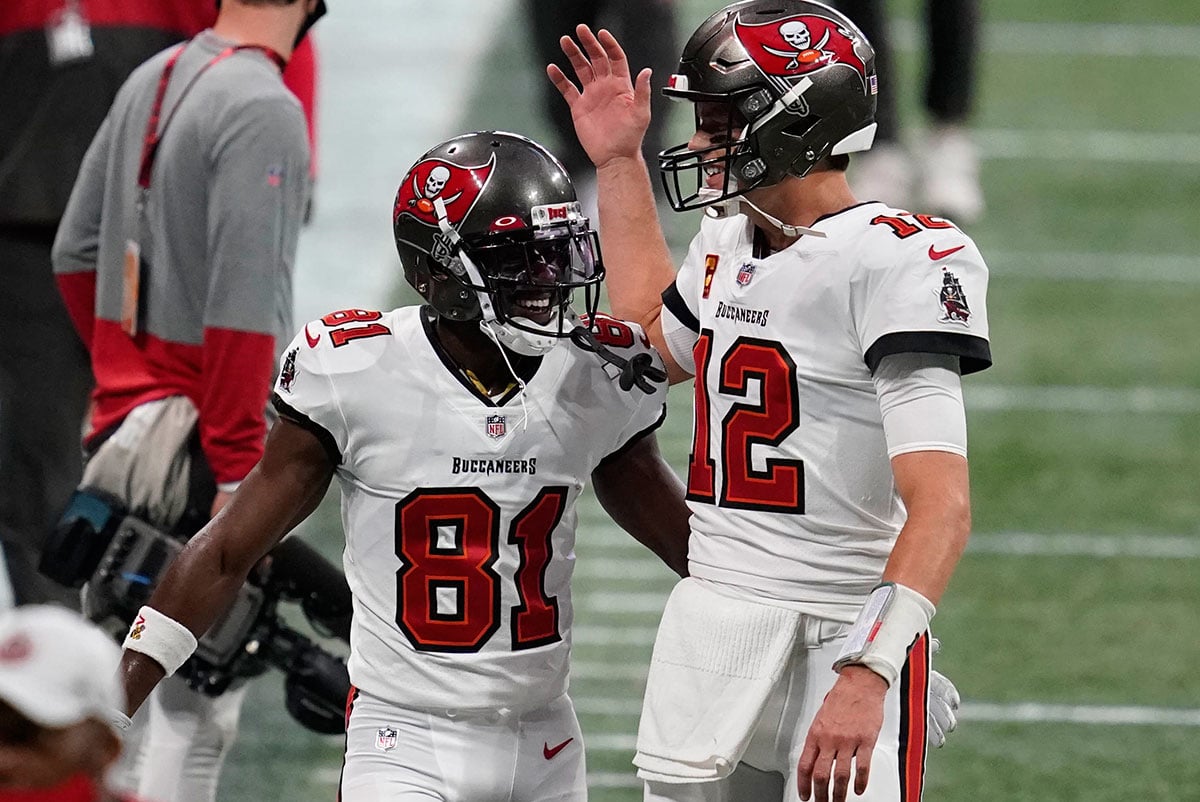 The Bucs continue to re-sign members of their Super Bowl team, the latest being wide receiver Antonio Brown. On Wednesday morning, Tampa Bay brought Brown back on a one-year deal worth $3.1 million. The deal is fully guaranteed and includes a $2 million signing bonus. If all of the incentives are reached, the contract will be worth up to $6.25 million.

Antonio Brown was 🔥 down the stretch… pic.twitter.com/qoFmxGBN3o

So with Brown re-joining the best receiver room in the NFL, does that prevent the Bucs from selecting a receiver in this year’s draft? No, it doesn’t.

It just might take the temptation to draft a receiver in the first two rounds off the table due to a crowded depth chart. But there is still a future need at the position, and that’s what the Bucs’ draft strategy is all about in 2021.

Here is a look at Tampa Bay’s wide receiver roster and the years remaining on those players’ contracts.

The Bucs expect to sign Godwin to a long-term extension prior to March 2022. Should that happen, only Godwin, Evans, Miller and Johnson could be left by the start of the 2022 season. With the Bucs carrying at least five – and most of the time – six receivers, don’t rule out Tampa Bay drafting a receiver for competition this year. While the Bucs likely won’t spend an early round pick on another wideout due to Brown’s re-signing, Tampa Bay could target a receiver in rounds 3-7 to help on special teams. One outlier could be Florida’s Kadarius Toney if he’s still on the board in the late second round. He’s been compared to a younger Brown inside the Bucs’ building.

Scott Reynolds is in his 27th year of covering the Tampa Bay Buccaneers as the vice president, publisher and senior Bucs beat writer for PewterReport.com. Author of the popular SR's Fab 5 column on Fridays, Reynolds oversees web development and forges marketing partnerships for PewterReport.com in addition to his editorial duties. A graduate of Kansas State University in 1995, Reynolds spent six years giving back to the community as the defensive coordinator/defensive line coach for his sons' Pop Warner team, the South Pasco Predators. Reynolds can be reached at: [email protected]
Subscribe
Login
Please login to comment
22 Comments
Oldest
Newest
Inline Feedbacks
View all comments

Still believe a pass rusher or DLine should be the pick at 32 for the Bucs. Secondly, I would go Offensive Line. Lastly, the best player available is always an option.

You draft better than Scott who seems to want a QB at No. 1 and a WR at No. 2, neither of which will even sniff the field or help the Bucs SB hopes for this season. Go back and see how much the Packers No. 1 pick helped them last year, especially in the NFC Championship Game.

Go best available player rounds 1-7. No kickers please.
Even though the Bucs are picking 32nd overall they can crush this draft if they take highly rated players that fall to them.

Here’s an idea….trade back out of Round 1, add some picks in Round 2 and 3 and get some quality people in the trenches on both sides of the ball. We don’t need to even think about a receiver in this draft. We have all you could ask for right now. If you draft anything in the receiver category make sure he can run back punts and kicks. That’s what we need.

I don’t think so Buc76. Here’s why. All 22 starters r back. There really isn’t even many open spots for the lower draft picks to even make the team. We r win now mode. I say go just the opposite. Trade up if u see that a impact player ( pass rusher, DLine) u have on ur board has fallen and u have a chance to package a few picks to move up and get this impact player. There just any really any open spots on this team this year. That’s a rarity.

BPA all the way! For the first time in their history the Bucs are in position to go BPA like New England did in the past. Also, with all the Belicheat disciples in the war room they might start stock piling draft picks for next year. That’s what I would like to see.

Tom gets hurt, we have a 31yr old who hasn’t taken a meaningful snap of any football in years, and has never played a full regular season NFL game. Have a nice day.

So a rookie QB is going to come in and do it for you. Give me a break.

Journeymen QB are journeymen for a reason. A rookie QB, especially in a high-ceiling draft like this one, stands a better shot of getting it done.
I’m not saying we must go QB in the first two rounds, but if the opportunity presents itself, there’s no position more valuable.

There are a lot of journeymen QBs available. Look what Teddy Bridgewater is worth, 6th round pick.

No kidding. And the Panthers also paid 7 out of the 10 MIL still owed to Bridgewater. I wish we traded a 6th for Bridgewater and only have to pay him 3 MIL. That’s a steal. Not saying Teddy could take us to the SB, but he can keep the ship moving for however long Brady is out for. Which is more than I can say for Gabbert, Griffin, or a mid round rookie

Have to agree with Dr. D on this. No way any rookie comes in this difficult offense and plays better. . Look how the GOAT even struggled beginning last year. Thinking any rookie especially where we draft can come in and be back up better than guy with years in this system is utterly ridiculous.

Since the Bucs have basically resigned their entire roster and no combine numbers on this year’s prospects. Why not trade every draft pick for the same round next year plus a later draft pick in this year draft.
That way the Bucs are loaded with draft picks next year when they will need cheaper players to resign the veterans they want to keep.
Besides special team players especially a Punt & Kickoff Returner, this team is set for this coming year.

With the 32nd pick take Kyle Trask in case Brady gets hurt and also for the future after, hopefully, Brady becomes our Head Coach at age 46.

Can you tell me of any Gator QB who has ever succeeded in the NFL, There have been plenty to try but to no avail. You must be one of those provincial Gator fan.

Deciding who to draft based on the historical record of players drafted from their college team is incredibly stupid and should not factor at all into who we draft at any position. Other than Watson, Clemson hasn’t had any QBs go on to do well in the NFL, so Lawrence therefore should not be drafted. See how dumb that sounds?

I would like to see them “Risk it!”, and give the offense a real special threat Biscuit like RB Etienne or WR Toney.

With KC beefing up their offensive line, I have to think that Edge and DT are the smart moves. But, I would wait to rounds 2 and 3 for those if Etienne or Toney are on the board at 32.

I can’t disagree there. If Toney was there at 32, I’d trip all over myself running to the podium, to turn in the pick. And as far as Etienne, I’d GLADLY take him at 32, if he was BPA. One thing I’ll say, I have him as my CLEAR top RB over Harris. And would love to have him. He’s the next Kamara, CMC, Barkley, Ekeler, etc..

Thank you! That’s exactly what I wanted to hear. That it won’t effect their draft plans. And more specifically, if Toney falls to us, I didn’t want signing AB to stop us from running to the podium with the pick. Because I think Toney is an absolute stud! He 100% reminds me of AB. So it’s really refreshing to hear that they’d take Toney if he fell to 32. Because you cannot pass on him if he fell to us

Take best player available. I Don’t see Bucs trading up or down. D line and O line are biggest priorities if you have some players graded same but I still say that’s two spots you try to address first but again only if they are BPA each round though.