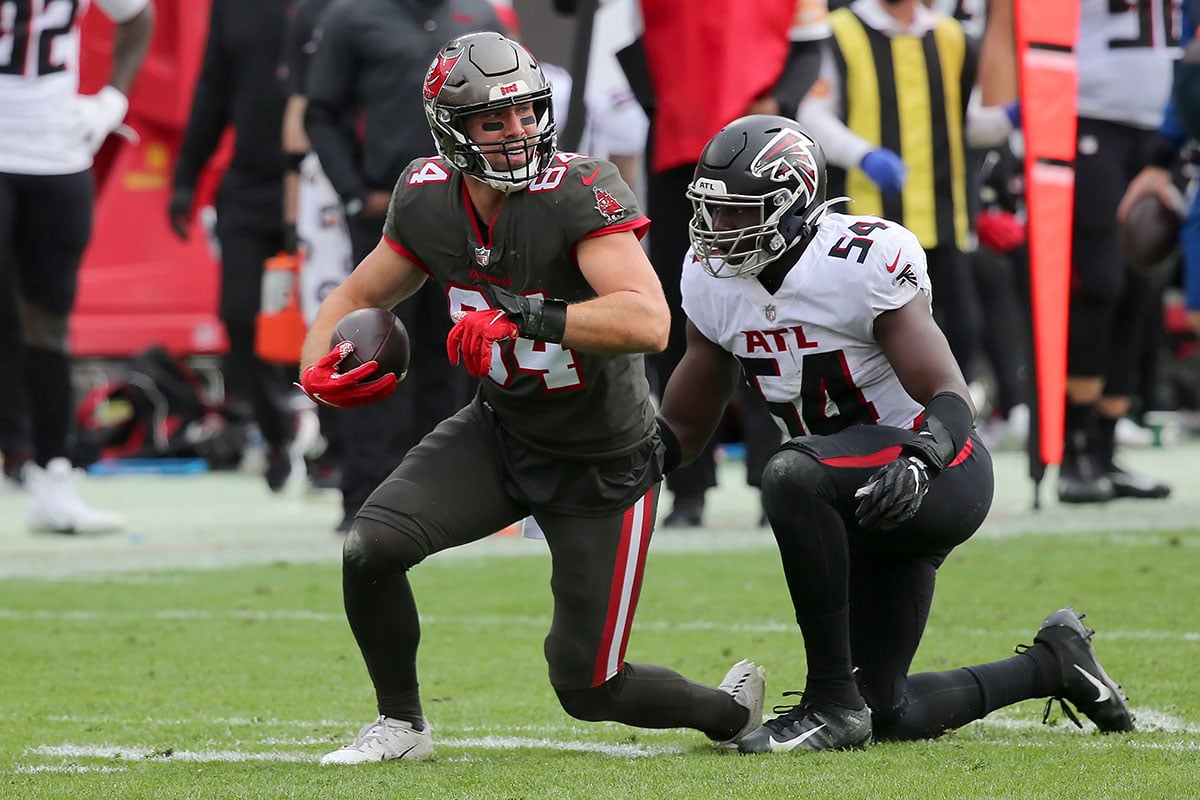 The Bucs made a big move on Wednesday with the re-signing of Antonio Brown. But it put Tampa Bay over the salary cap. The Bucs got back under the cap by working out a pay cut with tight end Cameron Brate for the second year in a row.

Field Yates has reported that the Bucs have saved $4.69 million by redoing Brate’s deal. He’ll receive $2.425 million as a signing bonus with a base salary of $1.075 million this season. He already received a $250,000 roster bonus earlier this season, so Brate will make $3.75 million in 2021. Brate has another two years remaining on his deal and the Bucs hold the option on them. Tampa Bay also added two more voidable years to the contract.

The Bucs and TE Cameron Brate have agreed to a reworked deal that clears $4.69M in cap space.

Tampa clears $$ to sign AB plus other moves as needed.

The Bucs have jumped through many  hoops in order to re-sign all of their players back from last year’s Super Bowl winner. It’s come from adding voidable years on contracts such as Lavonte David’s and extending the contract of Tom Brady. On Wednesday it was asking Brate for a pay cut.

This isn’t the first time that the Bucs have asked Brate for a restructure. In March of 2020, Brate’s contract was reworked just days after the announcement that the Bucs signed Tom Brady. A month later the Bucs would add to Brate’s position by trading for tight end Rob Gronkowski. Surely it paid off as the Bucs went on to win Super Bowl LV in their own stadium.

Even though this is the second straight year that the Bucs have asked Brate to take less money, it doesn’t mean he’s any less important to the team. Not only is he one of the longest tenured Bucs on the roster and a favorite of teammates and the fans, he was integral part of the offense in 2020 when O.J. Howard was out for the rest of the season. He saved his best for the postseason with 14 receptions for 175 yards and a touchdown.

Given Howard’s injury history and Gronkowski’s age, Brate could have another important role with the Bucs for the 2021 season.

Mr Reliable, Brate is very under rated TE and important piece to our success all he does is catch everything and gets open, so happy to have him back man we are so loaded this yr its insane

overrated, but only by homer Bucs fans*
fify

Not overrated. Bucs fans know he isn’t a top ten TE but neither is the perennially injured Howard. Gronk, however, still is. Actually Brate is probably being paid what he is worth, it is Howard who is being overpaid and I think that is what irks Bucs fans the most. I know it does me.
Howard is hyped up every year by PR and media types ever year just like ASJ was only to spend a part or most of the season on IR.

Yes, Howard, known as the Wally Chambers of Buc tight ends. Chambers was famous for being referred to by McKay as the “Admiral” because he spent so much time in the hot tub due to injuries.

Wow, your as old as me to remember that. Do you remember Mike Boryla.

Yes. He actually thought he was the best QB on the roster…….and said so. Right before he was cut.

Before Brate restructured his contract, he absolutely was NOT paid what’s he’s worth. He wasn’t even worth half of his nearly 7 MIL dollar contract. Yeah, now, after Brate took a pay cut, and Howard got a raise, it’s more likely that Howard would be overpaid than Brate. But that’s only recently. It was the completely opposite before

“all he does is catch everything “
even the SB trophy

This has truly been salary cap wizardry! Brate is money in the red zone and has been a great and consistent Buccaneer for years. Glad it worked out for both sides.

Brate will undoubtedly go down as a fan legend when his career is over and should be a shoo-in to be a part of the organization when he hangs up his cleats if he chooses.

Didn’t see him blocking much last season. TE need to do both. Otherwise a big slow receiver.

You gotta feel for the guy. It’s obvious that he prioritizes staying in Tampa (which I’m guessing mostly has to do with his family) over maximizing his earnings. He’d be worth more than this on the open market as a free agent. But this is the max of what he’s worth to us, and even this is kinda a lot for a player who only has value if someone ahead of him on the depth chart gets injured. But anyways, glad to have him back at a much more reasonable cost, rather than paying him like a borderline top 10… Read more »

He’s getting about $3mil which is about what he would be worth on the open market. While he does seem like a good guy, he wouldn’t be accepting the cut if he was worth the $6.5mil he was scheduled to earn. It seems like a pretty fair deal for all. So no, I don’t feel bad at all for him. For being a guy with limited skills, he’s made a pretty decent career for himself raking in about $25mil.

I agree he’s not worth the $6.5M, but I think he’d clearly get more than this. Chris Manhertz (blocking specialist in CAR) signed an extension this offseason for $3.25M. Dan Arnold signed for $3M. Marcedes Lewis (another guy who’s basically only a blocker at this point in his career) signed for $3M per. Brate is head and shoulders above those guys. Gerald Everett is coming off a CAREER high 41 receptions for 417 yards season, which he put up in 639 snaps last year. Brate put up 28 receptions for 282 yards in 241 snaps, just over a third of… Read more »

You are looking at AAV. Those TE’s got more in first year guaranteed money. Manhertz and Arnold around 4.5 million.
Brate is a 5 mill per year TE on the FA market looking at Gerald Everett getting 6 mill. Just makes your pov more substantial considering the cash payouts to those TE’s.

Great news. I agree Brate is great team mate and with Howard’s injuries and Gronks age this was a very smart signing.

They should have restructured the oft injured Howard’s contract. Rumor is the Bucs haven’t even been able to get a third round pick for him in a trade.

This makes no sense. $0 of Brate’s $6.5M 2021 salary was guaranteed, which gave the team some leverage in approaching him and seeking for him to take less money. Every last dime of Howard’s 2021 salary is guaranteed. If they cut him, he still gets every penny he’s slated to get right now. Which means he would have had no reason whatsoever to restructure. He’d effectively have been taking money OUT of his pocket and handing it to them, which is very different from Brate’s situation. The only way to have restructured OJ’s deal would have been to have extended… Read more »

I wonder if the fact that he’s on a rookie contract, which can’t be restructured, has anything to do with that lol

I think of Brate like Horace Grant. Not a superstar guy that will create his own shots but he could hit consistently from 3 or 4 places on the court and didnt shoot unless he was in one of those places. Then he did the dirty work some and played efficient b-ball so he helped the team without hurting the team. Brate is like that.

Brate is an intelligent TE! Knows where the defense will be by the way they line up. Knows how to sit down in the crease and come back towards Brady when he is in trouble.

BUC FOR LIFE
Reply to  Gatordoc1

WHO LOVES YOU BRATIE? WE DO!!!! Great news on his return. Mr. Realiable!

Brate’s been a very dependable player,
now at a reasonable price range will allow him to play longer with the Bucs.

For sure. I was happy to hear about this earlier. After sitting on it, I don’t just like it, I love it. I’ve pushed for Brate’s release before around here, which may give the impression that I don’t like the guy, but that couldn’t be more wrong. I just think he was a terrible waste of money at the $6.5M he was slated to make. Not because he’s not good enough, only because of his limited role with the team. At this new number, he’s expensive depth, and he’s really priced more like a low-end starter, but I can live… Read more »

Completely agree about the money. At 6.5 MIL, I hate Brate. At 3 MIL or so, I love him. That simple. 6.5 for him was absurd. He’s not worth that. Licht is just making up for the big mistake he made, when he gave Brate that ridiculous contract, by asking him to restructure his contract every year

The two points I’ve been beating the drum for both happened on the same day. Brate took a paycut and the Bucs gave the cash saved to AB. Awesome offseason.

I wouldn’t be surprised to see Brate in on more plays this year, with maybe even a few packages made for him and his ability to get open. He can easily be the forgotten guy on the field with our wideouts and Gonk lining up. It appears he’s built a nice rapport with Brady, which always helps.