Bucs QB Tom Brady made his first ever appearance on the Howard Stern show on Wednesday and spent just over two hours talking with the legendary radio host. In that time, Brady and Stern covered a multitude of topics about his career spanning from moving his family into Derek Jeter’s home, his dieting on the TB12 method, leaving the New England Patriots, playing for the Bucs, and much more.

Stern has admitted that he’s not the biggest sports fan, but was able to get some big revelations out of Brady, including that Brady knew was leaving New England before the start of last season. “I don’t think there was a final, final decision until it happened,” Brady said. “But I would say I probably knew before the start of last season that it was my last year. I knew that it was just – our time was coming to an end.”

It came as a surprise at the beginning of free agency when Brady announced that he was leaving the Patriots even before the Bucs signed him. Many fans thought he would be a Patriot for life and did not want him to risk his legacy by playing for and failing on another team. But that hasn’t concerned Brady one bit.

“I never cared about legacy,” Brady said. “I couldn’t give a (expletive) about that. I never once when I was in high school said ‘Man, I can’t wait for what my football legacy looks like.’ It’s just not me, that’s not my personality. Why would I choose a different place? Because it was just time. I don’t know what to say other than that. I accomplished everything I could in two decades with an incredible organization, an incredible group of people, and that will never change. No one could ever take that away from me, no one could ever take those experiences or Super Bowl championships away from us.” 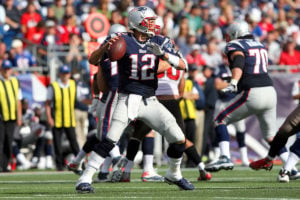 Brady said he had wrote down and prioritized about 20 different things that were important to him for picking his new team. When it came to choosing the Bucs, Brady said one of the big reasons he decided on Tampa Bay was because of Bruce Arians.

“I like him a lot,” Brady said. “And I think part of the reason why I chose here was, I mean there were a lot of reasons. I think even being a free agent I learned so much about having the opportunity to evaluate where the priorities really were for me. Coaching was obviously hugely important, and he’s been a long time coach. He has a different way about him but I think it’s authentic to him and I think the best thing for a coach to be is authentic to who you are. He’s definitely someone who tells you straight, which I appreciate that too.”

Reason why he is the GOAT..still unreal that we reeled him in.

I think Brady feels that he still has a whole lot left in the tank, and his drive and love to play the game of football hasn’t diminished since he was first drafted. I don’t think he would keep playing if he thought he couldn’t win, which is a good sign for us Bucs fans. I just might have to get a jersey after all.

It’s always a good thing when the Head Coach and QB get along. Brady chose BA so we know the respect/fondness for one another is there. The interesting thing to watch will be how things r structured on offense this year as opposed to how things went last year. Does BL still call the plays on offense? Will BA now call the plays? How much autonomy will Brady have to change/call his own play? This isn’t just another Free Agent QB switching teams. This is the GOAT! I’m sure it will be a group decision in game planning, but I’m… Read more »

That’s a very good point. With so much mutual respect being batted back and forth, where does the middle ground lie? Does the coach give it up for TB or vice versa. And how do you tell someone with Brady’s accolades “I don’t care what you think, do it my way!” This could make for a very interesting sideline.

When you are on your way out the door and can get 50 million, Hell spin’em with finesse! Give Bellacheat credit, He has a sense about..when to hold’em and when to fold’em.

Brady just needs to be exactly what he is. A competitor who is calm under pressure and elevates those around him. I know he is reaching his threshold on how long he can play, but we have a solid Coach and coaching staff and a team that has been poised to win for a couple years now. Brady finishes the puzzle. We need him to bring his experience and poise and toughness, protect the football, and lead the team the way he knows how. The Defense is on the rise, we may end up with 3 of the best CBs… Read more »

Never been the Buc Way. Every 10-15 years we get close. once we did it in 2002, which should have been a Dynasty along with the early & mid 80’s teams. Enjoy while it is here in 2 short years we will be laughing stock

For all of the criticism of Jason Licht’s draft picks and free agency decisions overall that some have made I find it interesting that Bruce Arians came out of retirement and said he like the personnel that he saw here.  Tom Brady  looked across the NFL and liked the coaching staff and the personnel he saw on board already.   I’m just saying that people in the business tend to look a lot deeper into situations and then make their judgments.  National pundits and talkers tend to focus on the big market franchises.  They don’t begin to look deeper into something else until it becomes a… Read more »

I find it interesting that TB makes the Bucs better by just being on the club. How can you not be excited?

And one person who should benefit greatly from Tom Being here is Byron Leftwich. This could be a huge learning year for him with Arians and Brady. Perhaps even helping to mold him into a head coach if/when Arians retires.

This is huge for the progression of BL’s coaching career. How he handles this offense with Brady will determine his future arc as a possible head coach! This will be a learning experience for all involved. Brady knows what it takes to win and win on a consistent basis. This is something the Bucs need to build on. Not just do well this season but establish a system that allows us to win as an organization at a consistent basis regardless to who is at QB. Exciting times indeed!

There was Silver linings in a dark cloud because Jameis was bust and picked first overall Licht desperately trying to make Jameis look better targeted receivers and to fix a broken QB brought in Arians.
Two key things that brought Tom Brady to Tampa. It like throwing a dart blindfolded and hitting the bullseye perfectly.

We are lucky we have Arians and his reputation. Without that, this was obviously not happening.