New Bucs defensive tackle Akiem Hicks is thrilled to play for Todd Bowles. But that wasn’t the only reason he signed with Tampa Bay.

The other big one?

Hicks played with Brady for 13 games during the 2015 season, his lone year in New England. That season ended with a loss at Denver in the AFC Championship Game. Hicks wants to team up with Brady for another shot a Super Bowl ring.

“One of the biggest things bringing me to Tampa is the chance to win,” Hicks said. “I would say that I’m happy to be here. I’m happy to be back with Tom. I know in that quarterback position, you’ve always got a chance to win a game with a guy like that. So, that was one of my reasons for being here. Also, all of the weapons that we have on defense.”

Hicks toiled in Chicago for six seasons from 2016-2021. That time was marked by sub-par quarterback play, at least for the most part. The Bears made the playoffs just once, going 12-4 in 2018. That was Hicks’ lone Pro Bowl season in which he recorded 55 tackles, 7.5 sacks and three forced fumbles. 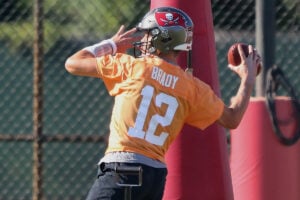 The Bucs’ offense has been in the top three in points scored since 2019 and has averaged 30 points per game over the last two seasons with Brady at the helm.

“It was definitely a draw,” Hicks said. “It benefits a defense to have a quarterback that can control the clock, the ball and the field position. And that’s what we have here.”

In just one practice in red and pewter, Hicks has already seen the championship culture that Brady and Bowles have helped cultivate in Tampa Bay.

“I’ll give you a tidbit that I got from today during practice on the field over here. I heard guys on the defense chirping guys on the defense and trying to make them play better – trying to motivate them. And I think that’s a winning culture,” Hicks said. “When you look around and somebody is telling you, chastising you or criticizing what you’ve done and you’re able to receive that and try to be better, I think that’s winning culture. And I saw some of that today.”

The Bucs hope to see plenty of Hicks in 2022. He battled some hamstring injuries that limited him to just 29 games over the last three years. Hicks played in nine games last year, recording 3.5 sacks. Now healthy, the 32-year old veteran could see quite a bit of playing time, and possibly even start. He’ll battle rookie Logan Hall for the 3-technique defensive tackle job, while also rotating at defensive end with Will Gholston.

“Well, that’s what camp is for – we’ll see what happens in training camp,” Bowles said. “All of those guys are pretty versatile across the line of scrimmage, and we like the versatility of it. But training camp will determine who starts down there.”