Brate To Agent Regarding Extension With Bucs: “Get It Done”

Home » Articles » Brate To Agent Regarding Extension With Bucs: “Get It Done”

Brate To Agent Regarding Extension With Bucs: “Get It Done”

Home » Articles » Brate To Agent Regarding Extension With Bucs: “Get It Done”

As PewterReport.com forecasted on Friday in SR’s 2018 Bucs Free Agency Insider, the Tampa Bay Buccaneers re-signed tight end Cameron Brate to a long-term contract extension instead of tendering the pending restricted free agent a one-year offer. Brate’s deal is six years and worth $40.8 million with $18 million in guaranteed money.

PewterReport.com spoke with Joe Linta, Brate’s agent, for the details of the contract extension, which makes Brate the 13th-highest paid tight end in the NFL with a $6.8 million per year salary. But Brate’s $40.8 million potential total ranks fifth among tight end contracts, and his $18 million in guaranteed money ranks first.

“If it wasn’t for Jason Licht, Cam might be in Harvard Business School right now,” Linta said, alluding to the fact that Licht was the general manager that identified Brate’s talent as an undrafted free agent and signed him. “Cam loves it there and loves the organization and enjoys playing there. From a financial standpoint there was risk on both sides. If the Bucs tender him and he has a really good year, it costs them a lot more next year.

“Conversely, if Cam signs a one-year tender and gets hurt, it affects his long-term value. We worked to the middle and did a deal that is more than fair and puts him in the top seven or eight guys in the league, which is probably where he’s at. It’s a pretty good deal for both sides.” 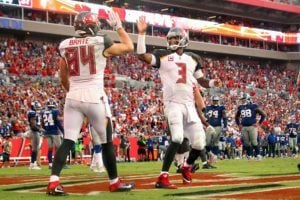 In three years with the Bucs, Brate has caught 129 passes for 1,556 yards with 17 touchdowns and has been one of Jameis Winston’s go-to guys, especially in the red zone. After bursting on the scene in 2015 with 23 catches for 288 yards and three scores, Brate had a breakout season the next year, catching 57 passes for 660 yards and eight touchdowns, which was tied for the league lead among tight ends, and set a franchise record for TDs in a season by a tight end.

Last year, Brate had 48 catches for 591 yards and six touchdowns, which was tied for the team lead with rookie tight end O.J. Howard. Both Brate and Howard thrived in Dirk Koetter’s two-tight end offensive sets.

Brate’s re-signing comes on the heels of Mike Evans signing a five-year contract extension through 2023 worth $82 million last Friday. Licht and director of football administration Mike Greenberg have locked up two of Winston’s top targets for the foreseeable future.

“I think they are identifying core pieces of the offense that they want to keep long-term,” Linta said. “I think those decisions are made based from on-the-field performance as well as off the field with the kind of people they are. Cam is definitely a guy you would want to marry your daughter. He’s an exemplary individual. He’s an amazing person that loves the community and I’m very proud to be associated with him.”

“All these guys seem to work pretty well together. Cam really likes Jameis a lot. I know they have a lot of chemistry. He’s really excited. We talked about waiting for free agency and he was pretty adamant about it. He respects me, but he said, ‘Get it done.’ He wanted to be there, and my charge was to get it done. We got it done to where I think there is going to be praise and criticism on both sides, which is good. That means it’s a good deal.”

Pro Football Talk reported that up to $4.5 million in bonus money is available for catches, touchdowns, and Pro Bowl appearances. Those amounts (the triggers are 65 catches and 10 touchdowns) apply over and above the base value of $40.8 million.

Licht and the Bucs also re-signed cornerback Brent Grimes to a one-year deal worth a maximum of $10 million including performance bonuses, in addition to tendering wide receiver Adam Humphries a one-year deal worth $2.91 million and comes with second-round draft pick compensation if another team signs Humphries to an offer sheet.

The recieving corps is locked in for next year: Evans, DJax, Hump, Godwin, Brate and OJ.

Now give Jameis some time.

I hope Jameis matures this year.