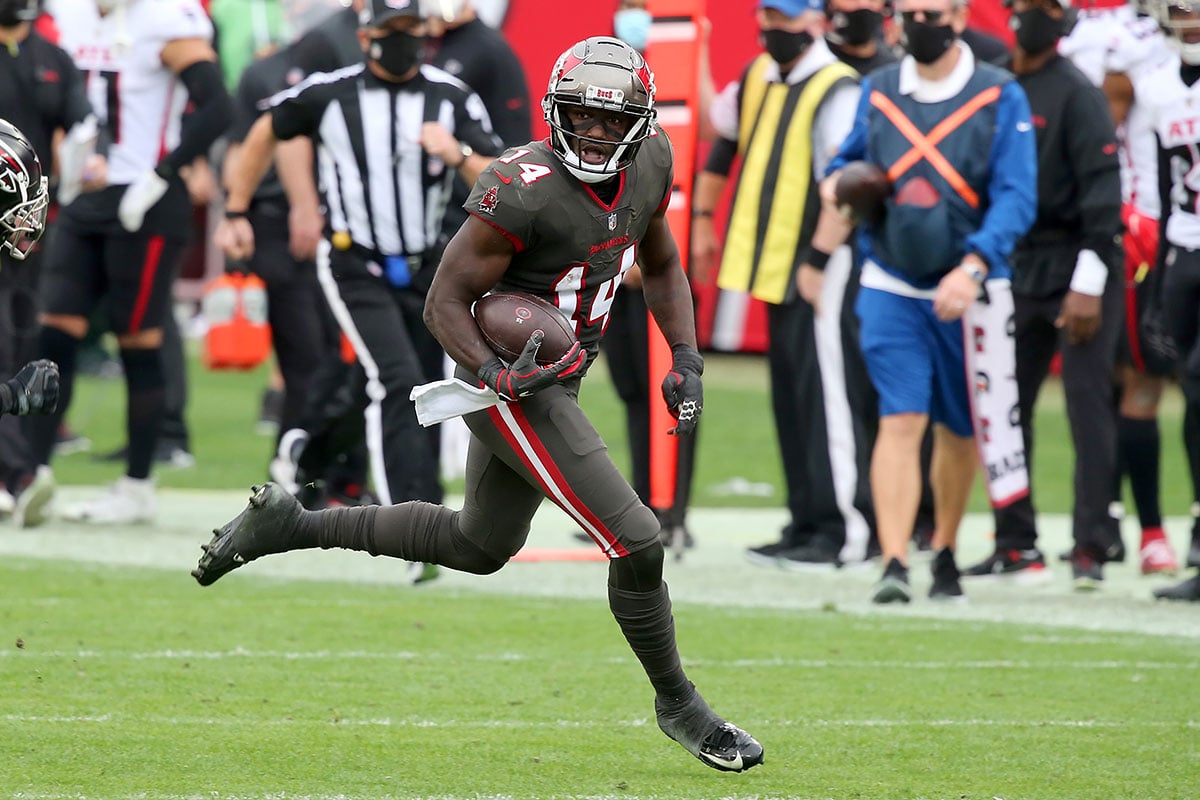 In a move that would have been shocking two days ago, the Bucs are placing the franchise tag on wide receiver Chris Godwin, per ESPN’s Adam Schefter. This will be the second-straight year that Tampa Bay has used the designation on Godwin, as the team was determined to keep him off the market. Godwin’s price tag for the 2022 season will now be $19.2 million.

Bucs and WR Chris Godwin did not reach a long-term deal today and he now will be tagged, officially, per source.

That $19.2 million tag is far more than the Bucs would like to pay Godwin on a per year basis. Especially considering the receiver’s free agent price tag was likely in the $17 million range. Now the Bucs will attempt to reach a long term deal with Godwin as soon as possible. Until that day comes, the tag will act as a placeholder to keep other teams from making offers. The Bucs have until July 15 to reach a new deal with Godwin. But they’ll need salary cap relief from a long term deal much sooner than that. 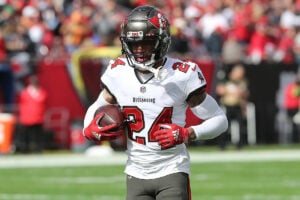 It’s frustrating that things reached this point in Tampa Bay. There is no excuse for the team’s failure to get a long term deal done with Godwin. There has been ample time to work toward an extension for the young receiver, yet the two sides remain divided. Godwin isn’t commanding top-tier money like Davante Adams, who could re-set the market. Coming off a torn ACL, he should be happy to land in the 16-17 million range. And the Bucs should be happy to land him there.

Instead, the indecisiveness of both sides may cost the Bucs dearly. Tampa Bay could and should have used the franchise tag on Carlton Davis, keeping him from hitting the market. Instead, they’ll now risk losing their best cornerback. Outside of Davis, the Bucs don’t have a sure thing at cornerback. And the Auburn product could command a hefty pay day in free agency.

So the good news is the Bucs will get Godwin back for 2022 and beyond (eventually). But at what cost?

Very stupid decision on the Bucs part. I love Godwin, but NO WAY should get paid more than Mike Evans. Godwin is a possession receiver that doesn’t score lots of touchdowns. They should’ve used it on Davis because he stops TDs from being scored. Godwin won’t score enough TDs to counter the number of TDs that won’t be stopped by not having Davis at CB. A bad corner can easily get burned for multiple TDs in a game. It’s far easier to find possession WRs than good CBs.

Bad decision. Much too much to pay. Godwin is good but not a game changer. Defense back is the bigger problem area needing help

Wow doesn’t seem too smart. This team is going to be a mess again it seems.

So is Godwin asking for too much or are the Bucs offering too little?

Over the last two seasons, and perhaps three plus seasons, the only player the team has put in a strong effort to retain that has consistently rejected their offer is Godwin. Every indication that this is the fault of Licht, Greenberg or the team is suspect. Look at every player they’ve locked up the last two seasons and how amazingly balanced the deals have been between rewarding the player and helping the team sign more guys and ask your question again silently. Godwin has every right to go after every dollar and I have every right to despise him for… Read more »

As much as I like Godwin, this appears to be the case in my opinion as well.

Selfish is what I call it by Godwin and his Agent. Why would the Bucs do this? Got to be some kind of Cap Saving Event somewhere? We have no clue if he will be as good as before. what a risk this is!

Plenty of time to have worked this out already. Makes no sense that a contract couldn’t be worked out. Glad he will be a Buc for at least one more season, but we definitely over paid. No way is Godwin better than Evans! Show me the numbers! Godwin doesn’t have the consistency, year in and year out that Mike does. Godwin is a beast, don’t get me wrong. But, he’s no hall of famer. Mike will be a first ballot HOF. Fact!

deep deep draft at WR.. Godwin is a favorite of mine but franchising him or Davis made little sense to me. Coming off an ACL injury, we might not see the best of him until late into the season. Biggest thing is they couldn’t come in next year without Godwin, Jensen, Marpet, Brady, Fournette, Gronkowski and Cappa on the offense. My guess is Godwin and Cappa will be the only two of that group to return. On defense, Davis, Whitehead, Suh and JPP might be gone. Team is going to look very different. Could go from returning 22 starters last… Read more »

While I love Godwin’s ability and production, his untimely injury history is very frustrating as is the fact that he and his team were not able to get a deal struck before the franchise deadline.

First, Godwin is the only player the team has had a problem reaching a fair deal with and now for two straight seasons. Giving him the tag again is not a decision I favor. He’s going to leave next season or the team is going to get screwed on a horrible deal. Let his ass walk before giving away the bank. The wide receiver position is ridiculously stocked league wide and I guarantee someone with high end talent would take the offer Godwin continues to reject. This move smells desperate in a ‘please play this season Tom’ kind of way…look… Read more »

As I know the PR staff has inside info into the team. Im guessing they got some insider news on this negotiation. Reading the article they say Godwin should be happy with 17M and that the Bucs should be happy to pay it. So if we take them as having insider info that means the Bucs are probably offering 14-15M range. If thats the case I agree its a big fail by the Bucs and thats a lowball offer. Yet I dont know if this is just an opinion piece. If it is I disagree with saying Godwin should be… Read more »

He’s the best player on offense we have. He deserves to get paid and now he will. But if we lose Carlton Davis and Jensen, that will really sting. Can we use the Franchise tag on other players if they get a deal with Godwin done soon?

Negativo on that seat26. Strongly disagree! The best player on this Buccaneer Offense is Mike Evans bro! Hands down! Year in and year out produces 1000 yards receiving regardless of how he feels! When Evans is over 100 yards receiving on the day, the Buc Offense is usually humming. Take Evans out the game and tell me how good Godwin is when he’s covered by CB #1? Don’t get me wrong, I’m a Godwin fan. He is awesome and it works because u have them BOTH as bookend wideouts. Evans is WR #1 and Godwin is WR #2. One is… Read more »

Stupid amount of money. Scraping to keep a decent starting lineup on the field. Godwin is great, but wouldn’t have paid that money. Good for him I guess, not so much for us.

The only one happy about this is, Gabbert?

I always find it comical that fans call players “greedy” and “despise” them for seeking to be paid commensurate with their peers. Hmmmm, just like most of us in the working class; I suspect we all think we’re worth more. Do any of us tell the boss to reduce our salary so we can pay a co-worker? Are players any different than us? We debate what a player is worth, when like it or not, in reality, his value is what the market is willing to pay him. Granted, we fans might place a higher or lower dollar amount on… Read more »

Yeah this was not the golden move by the front office. May have felt some internal pressure since CG is such a popular player within the organization. Regardless of how you feel about CG tying up this much $$$ in WR’s is not wise. You have just limited what you’re able to do this coming FA period where There will be a slew of good WR looking for a jobs. You almost certainly will lose Jensen, maybe even Cappa and what will you do about Carlton Davis. I just have a bad feeling about this move. Pom Poms down!

Well, there he goes again, and again, and again … Jon Ledyard, truly a Legend in His Own Mind, trashes the front office of the Bucs for stupid moves – that would be the same front office that has proven itself a master of the salary cap for at least the last five years, winning one Super Bowl and a Division Championship and having the league’s leading passing offense last season. But then, hey, what the hell. Jon Ledyard has general managed how many teams to the Super Bowl? Or a Division Championship? Or even to just winning a single… Read more »

wish they have him back on a long-term deal but i prefer to keep Godwin over Davis… FA market and draft looks better at CB than WR… + avoiding 2023 with your 3 CBs hitting FA is smart, now you have to find long-term solution this year for at least one spot. the $15-16M/year contract evaluation for Godwin is crazy, the Evans comparaison too, Mike signed his deal years ago, today market for Mike Evans will be over $20M… Mike Williams just got paid $20M/year with $40M in guaranteed money, if i was Godwin’s agent there is no way i… Read more »

This is nuts! He’s at 45% per Arians! He might be ready for Regular Season and could be a similar situation like Howard. Damm stupid!

Maybe they want to see how he recovers from his injury before locking him up long-term? I love Godwin and would love to see him stay long term, but I don’t like the idea of gambling long term/huge contracts on a player coming off a season ending injury.