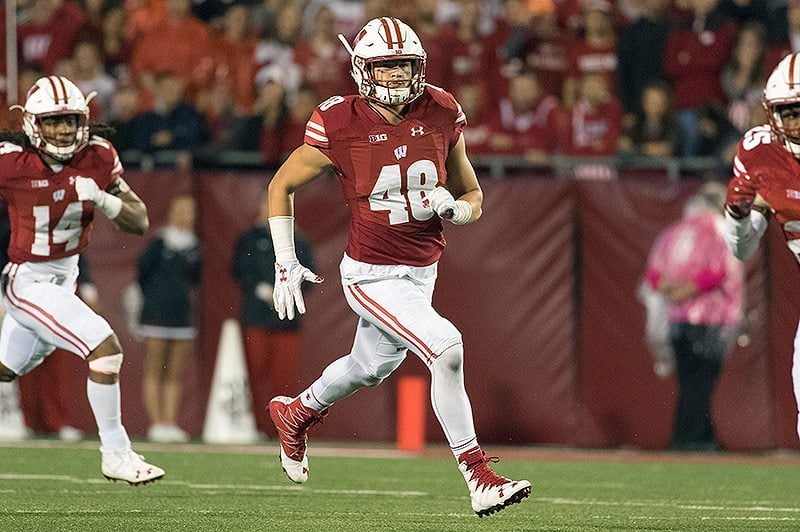 The Buccaneers aren’t in desperate need of linebacker health, but went with one on Saturday in the sixth round selecting Wisconsin’s Jack Cinchy.

The big issue for Cinchy has been durability after missing the final half of his junior season with a torn pectoral muscle, then he missed the entire 2017 season with a knee injury.

Tampa Bay appears set with three solid starters in Kwon Alexander, Lavonte David and Kendell Beckwith. Behind them is Adarius Taylor(formerly Glanton), Riley Bullough, Nigel Harris, Jeff Knox and Cameron Lynch. If healthy Cinchy is projected as an inside linebacker and will need to make the team most likely on his special teams prowess.

We will have more details and player quotes coming up.

I mean, I’m not gonna sit here and hate on a 6th round pick, but if we were going to take a Linebacker/ Special teamer it shoulda been Shaq Griffin.

Why should we of gotten Shaq Griffen ?

Stop hating this pick and find out why Licht picked him

Lol did you even read what I said? I said I’m not going to hate on a 6th round pick. But to answer your question, we should have taken Shaquem Griffen in the 4th because, he’s one heck of a football player. And he hasn’t missed a year and half like Cichy has. What tape there is out of there of Cichy is quite good, it’s not Shaq Griffin good but still good. And it’s abundantly clear that Cichy caught the injury bug something horrible at Wisconsin. What makes you think he’ll suddenly be able to shake that in the… Read more »

I like Shaq Griffin but will rely on what the Bucs did. They picked up an inside linebacker instead of an outside linebacker so they must have felt that was a bigger need. I believe that Cichy is there to challenge/replace Riley Bullough or Glanton.

lol Cichy won’t have to do very much to beat out Bullough. Dude is a talentless bum who know nothing fans fell in love with on HK because someone called him Joe Dirt.

Cichy was picked up #202 overall in the 6th round, Shaq Griffen already off the board, Cichy had a torn pec and an acl–just because you have that once does not guarantee it is gonna happen again. Kid plays with a high motor and perhaps he will get injured again but pick in the 6th round is no risk. Licht would of had to use pick #202 and the Jordan Whitehead pick to get Shaquem Griffen. This kid has good tape and good locker room mentality.

Joe Dirt/Riley Bullough is not a talentless bum, wtf is wrong with you anyway. The kid is a great teammate and plays aggressively and with motor on high. Stop being so insulting.

Hahahahahahaha! Trust me on this, Riley Bullough will never even come close to being a contributor on a 53 man roster. He does not have the ability. Couldn’t care less about how much he talks during practice, he is SloooooooooOOOOOOOW. Can’t blame you for liking him as a person, but it’s just like Bucs fans to fall in love with a player that can’t play just because they saw him on TV. Btw, In case you didn’t notice, my point about Shaq Griffin was that we should have taken him with our 4th round pick if we were going to… Read more »

Btw I couldn’t disagree with you more about Whiteheads tape. His tape as a Running back is decent, nothing special but decent.

His tape as a safety showed me that he lacks any kind of instincts and is shaky in coverage. After watching a few of his game tapes on youtube I was left wonder just wtf it was that Licht and Koetter saw in him that made them think he would be a better pick than Griffin.

But wtf do I know.

Cichy is a good value pick up to see what the Bucs have with him. I would consider Cichy the one guy the Bucs will probably end up putting on IR if he is not healthy yet.

Have a very strong feeling that Jack Cichy will be more than linebacker depth by the end of our season. He is healthy now and highlights of him at his pro day are out there, overall this pick is likely to be superior. Go to youtube and type in Jack Cichy–good stuff.

Isn’t it just incredible that there are folks who bemoan each and every selection? At least give yourself some credibility by just once liking one of them. I know virtually nothing about this player. I’m not going to sit here and claim he’s going to be great or predict he’ll be an early cut. I’m just hopeful that he’ll make the roster better.

I’m on record stating that I really like that we picked Vita Vea, Carlton Davis, and Alex Cappa, and I’ve warmed up to the Ronald Jones pick. But the other picks I have my doubts about and truly believed Licht would have better served the needs of our team Selecting Isiah Oliver over MJ Stewart. And selecting Shaq Griffin instead of Jordan Whitehead. Which would have free’d us up to draft a development pass rusher like Joe Ostman, who dominated the East/west shrine. Look, I am a passionate Bucs/ football fan, and I spend a lot of time in the… Read more »

This guy sounds like he could be a great addition. Nice write-up. Thanks for posting the link.

But then you go and slam “Joe Dirt”. Who’s a heck of a player, that sets the defense and hits a ton. He’s weak in coverage and lacks that from what I can tell so far, would keep him out of a starting role. But a bum? Really?

Dude, Riley Bullough does not have any where near enough natural ability or skills in order to do anything in the NFL but barely cling to a roster.

I get it, you like him because he was featured on HK and talks a bunch of nonsense on the field. But that’s all he can actually do is talk. Nothing against the guy personally, but in terms of his play on the field, he’s a bum.

Congrats on the great coverage

It is understandable given how deep LB depth is for Bucs now.

The more I look at this, Cichy should have a good chance to make the team. He is there to beat out Joe Dirt. It would have been harder for an outside linebacker to make this team. As Schwifty9 mentioned, Joe Dirt’s talent/skill level suggests that he barely can cling to a roster. However, credit goes to Joe Dirt. He is not a guy that just spews nonsense on the field but a guy that understood the game better than a whole lot of guys with more talent. He is an extrovert that is not only liked by the fans… Read more »

He stayed in and finished the Iowa game when he tore his pectoral muscle. And, his pro day performance indicates that he has almost completed his rehab from the ACL tear. I think that he is going to be a steal. I believe that he may be a better in the middle run on running downs than Kwan. He is big enough to challenge Beckwith as starter on the strong side. And, he can make splash plays. Watching him in the Wisconsin-Ohio State game, I think that he could become a Pro Bowl player in a couple of years. If… Read more »

I’m onboard with this pick too, this 6th round pick looks very possible to make the team and contribute, he seems aggressive and a leader, a true player, I thought he looked a little like Kiko Alonso-(Lol!)-too soon to tell. Hoping for all our picks. Man what a draft! Go Bucs!