Bucs Announce They Will Wear Color Rush Uniforms In 2017 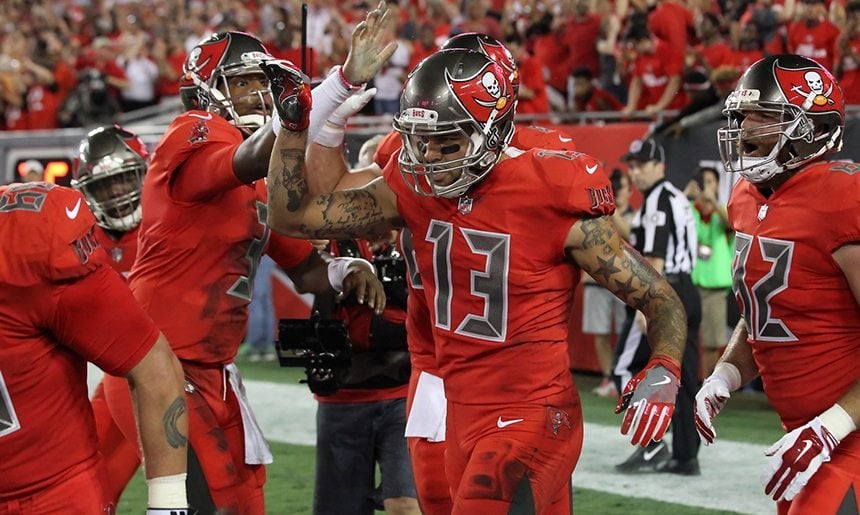 Bucs Announce They Will Wear Color Rush Uniforms In 2017

As the season inches closer and closer – to some it might feel like it’s taking a lifetime to get here – the Tampa Bay Buccaneers announced the different themes that will take place during certain home games in 2017.

The two big games are the primetime games, the one on Thursday Night Football, Week 5, against the New England Patriots, and the one on Monday Night Football, Week 15, against the Atlanta Falcons. Both games will not only be on national television, but will come with Ring of Honor ceremonies. The first will be honoring the late Malcolm Glazer, and the second will be honoring the franchise’s Super Bowl winning head coach, Jon Gruden.

But, there was a key detail that was announced for the first time with that Thursday night game in this week’s press release, and that is that the team will officially be participating in the league’s “Color Rush” jerseys again.

The Buccaneers will host the first of their two primetime Ring of Honor games just four days later, on October 5, when they face off against the New England Patriots on Thursday Night Football. The team will be honoring late owner Malcolm Glazer, who bought the team in 1995 and oversaw one of the most impressive organizational transformations in sports. In addition to Glazer’s induction, the Buccaneers and the Patriots will each wear their Color Rush uniforms.

I, for one, really liked the Color Rush jerseys the team wore last year (as pictured in the featured image above). Some fans like them, some don’t.

Others have requested maybe going all pewter instead of red.

Another #ColorRush concept for the #Bucs, with all pewter. pic.twitter.com/uT6jxB1c75

Or maybe even a total throwback – if they NFL allowed the Bucs to wear orange again, even with their helmet.

Here's what the #Bucs' #ColorRush jerseys could look like if Nike went with a throwback/creamsicle look. pic.twitter.com/32XdjzBRpU

We don’t know exactly which Color Rush jerseys the team will roll out in 2017, but we know they’ll be wearing them.

I like the orange uni’s with the Bucs helmet, not really a fan of the all red look.

Whatever motivates the players to win is ok with me! I must admit I went back to take second look at the all pewter unis – looked really good with the helmets. Unless they change the helmet rule, the original throwback unis just doesn’t fit – bring back the old Bucco Bruce helmets and I’m in! The all red is ok too – kinda sets the theme for “there will be blood”! lol. Whatever, Go Bucs!

That Thursday night game, when the Bucs in our ketchup colors played against the Rams in their mustard colors, was less than tasty to me. I still like the uniforms worn in the Super Bowl the best. I enjoy the throw-back game when I get a chance to wear my old 43 Eckwood jersey. At least we don’t have to cheer for a team in a bumblebee outfit like the old Steelers.

I think they all look like crap. We don’t NEED video game colors, just current Buccaneer uniforms as they are. Throwbacks are fine but they refuse to do the Creamsicles which is a shame. But how about the Super Bowl uniform? Oh well, all about marketing I suppose. There will be some grade school kids who might get a color flash jersey for Christmas or a birthday. pfft.

Throwbacks are one thing; these color rush costumes need to just stop.