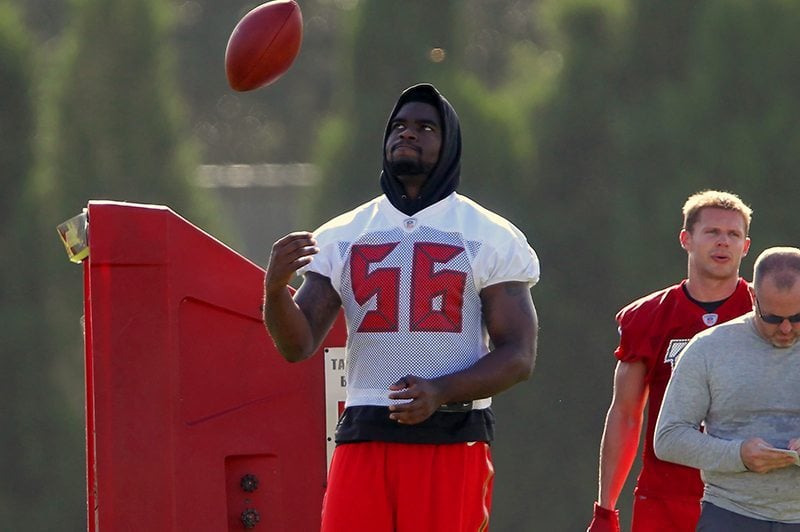 Buccaneers defensive end Jacquies Smith has suffered a setback in his recovery from a torn ACL last year, according to Tampa Bay head coach Dirk Koetter.

“Yeah, well, we’re real healthy,” Koetter said. “We’re fortunate to be in a good spot health-wise. Except for Jacquies Smith. He had a little set back. He’ll have a little procedure done this afternoon on his knee and he’s gonna be out for a few weeks. We hope to get him back at some point.”

Smith’s setback is supposed to be at least three weeks.

On Wednesday the Bucs announced that Smith will miss the start of training camp as he was placed on the Active/PUP List. PUP stands for physically unable perform, and the reason is that Smith has not yet been medically cleared to practice after suffering a torn ACL in the first quarter of the 2016 season-opening victory at Atlanta. That injury prompted the team to place Smith on injured reserve last year.

Once he passes a physical and is medically cleared by team doctors, Smith can be activated from the Active/PUP list at any time. Smith, who missed the entire offseason while rehabbing his injury, will not count against the Bucs’ 90-man roster while on the Active/PUP list. The Bucs released defensive end Evan Panfil on Thursday and signed Justin Trattou, a former Florida Gators defensive lineman who has spent time with the New York Giants and Minnesota Vikings.

Smith, who is entering the 2017 season in a contract year as a restricted free agent, was the team’s second-leading sacker in 2014-15, recording 13.5 sacks and four forced fumbles, in addition to recovering two fumbles – one of which he returned for a touchdown in ’14 in a 7-point home win against Jacksonville. Some Bucs fans might forget that Smith actually led the Bucs with four sacks in the preseason and was primed for a big year before tearing a ligament in his knee while covering a punt against the Falcons just minutes into the 2016 campaign.

“[His loss] was huge because he only played one play,” Bucs defensive line coach Jay Hayes said. “He played one play and it was disheartening, really. We went into the game and I think we stopped them on that first third down against the Falcons and he went out on the punt team and kind of got jostled. It was not a big hit. I think somebody just put his hand on him and his leg [buckled]. He walked off. I was talking to him and I said, ‘Hey, Jack. Next series let’s …’ and the trainers were talking to him and he said, ‘I think I hurt my knee.’ Then [the trainer] said that he thought he tore his ACL and that was it. He got one play.”

Smith’s pass rushing skills were sorely missed last year as Tampa Bay only had one player with seven sacks – Bucs Pro Bowl defensive tackle Gerald McCoy, who matched the same number of quarterback captures Smith had in 2015. While the defense cobbled together a respectable 38 sacks, losing Smith early on – and Ayers for four games due to an ankle injury – really hurt Tampa Bay’s ability to get to the quarterback on a consistent basis.

For more on Smith’s recovery this offseason, and what he has in store for the Bucs in 2017 once healthy, read this edition of SR’s Fab 5.

As you suggest, While on active PUP, Jac Smith does count against the 90 man limit. If as a result of his newly required procedure, he is not fully recovered before the start of the regular season, he can be moved to reserve PUP, then he will not count against the 53 roster. After 6 weeks he would be eligible to return, then somebody must be cut to make space. While on active PUP, he cannot practice even for one minute or he will no longer be eligible for reserve PUP if necessary. Hope this helps. Go Bucs!

Wonder why thses kind of things are caught only when they report to camp. Am I missing something here?

Horse, Because those are the CBA rules that only apply to training camp. Each player must take a physical and be cleared by team medical staff before he can practice. That is why players have to report one day (veterans) before camp starts. As you recall Smith was held out of OTAs anticipating that he would be ready for camp. What might have been a telling sign is that Smith has been in rehab for 10.5 months already but a team can do nothing until medical staff speaks. I don’t use demeaning terms like camp meat, but Justin Trattou is… Read more »

Macabee, I hope he’s not out too long or he’ll have a tough time getting back in football shape. Surely someone on the Bucs staff had to have witnessed some of his rehabbing and had an idea when he would be ready pertaining to playing football?

Unfortunately this is a reminder of how thin we are at multiple positions, including some of which our starters are disturbingly old.
We are without question a better team this year than last, at least on paper, but given the mix of vets nearly past their expiration date and rookies on the roster it will require a ton going right to get into the playoffs this year