Bucs Had Plenty Of Miscues, But One Sticks Out

Home » Articles » Bucs Had Plenty Of Miscues, But One Sticks Out

Bucs Had Plenty Of Miscues, But One Sticks Out

Home » Articles » Bucs Had Plenty Of Miscues, But One Sticks Out

If not for a holding call on cornerback Jude Adjei-Barimah with less than two minutes left in regulation, the Bucs would’ve held Oakland on fourth down at the 5-yard line and all but sealed the victory. Everything from that point on would’ve been avoided.

Jameis Winston would’ve ended on a high note, instead of sputtering through three consecutive three-and-outs to finish the game. The defense, which was on the field for 94 snaps, wouldn’t have been gassed and whiffed on tackles late. And Derek Carr, who had all day to throw, wouldn’t have had arguably the best game for a quarterback this season, throwing for a Raiders’ record 513 yards.

But an unfortunate mistake, on the opposite side of the field no less, kept the game alive.

“Can’t have it happen,” defensive tackle Gerald McCoy said in the locker Sunday. “Penalties will kill you at crucial times during the game. Definitely can’t have penalties and we did. That was a crucial moment, that one penalty. Regardless of all the penalties they had, that one we had changed the game.”

Cornerback Vernon Hargreaves, who played 93 snaps and was visibly exhausted towards the end, thought that fourth-and-3 play was the final stop.

“Of course, definitely did,” said Hargreaves, who conceded that Raiders’ Amari Cooper got the best of him Sunday. “But obviously, there was a penalty on the play so we have to keep playing. We have to finish the game.”

The Bucs didn’t finish the game, though, and there were plenty things to point to other than Adjei-Barimah’s hold. On Monday head coach Dirk Koetter listed a few, going as far back to the first quarter to outline a game of missed opportunities.

“You can pick out a whole bunch of plays. We ran Mike [Evans] on an out-and-up and he was five yards behind the defense,” Koetter said of a play in the first quarter with the Bucs up 10-0. “It would’ve been an [81]-yard touchdown, but we didn’t hit it. Then we would’ve had a two-score lead. Pick your plays. 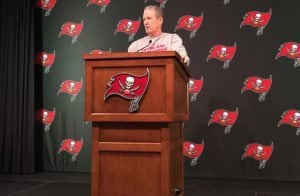 “We gave up a ton of passing yards, over 500,” he added. “Is that good? No, that’s not. We let them throw one over our head to Cooper [on third down in the third quarter]. We can’t do that. We had a long PI penalty that might’ve been another touchdown had we not gotten the penalty. Those are all things that come up in a game.”

Now the task is to move on to the next game. Preparing for a Thursday night contest is difficult, Koetter said, mainly for the player’s recovery and coaches to get the game plan together. But the important thing is to not let the Raiders beat you twice.

Atlanta comes in with the NFL’s No. 1 offense, Koetter noted, and while it helps that the Bucs are familiar with the Falcons, the accelerated week will be a test. Especially coming off a deflating loss.

Zach is entering his 3rd year covering the Tampa Bay Buccaneers as a writer for PewterReport.com. Since 2014, he's handled a large part of the beat reporting responsibilities at PR, attending all media gatherings and publishing and promoting content daily. Zach is a native of Sarasota, FL, and a graduate of the University of Tampa. He has also covered high school football for the Tampa Tribune and the NFL for Pro Player Insiders. Contact him at: [email protected]
Subscribe
Login
Please login to comment
7 Comments
Oldest
Newest
Inline Feedbacks
View all comments

No reason why we can’t beat this team. We have to put pressure on Ryan and blitz! On offense lets play short passes; James will help on this too. Time to find out what we got as a team. Gut check Bucs!

Regardless of the multitude of mistakes and poor play, much of which occurred in OT; if not for this senseless penalty the Bucs would have escaped with a win and Scubog would have been much happier leaving the stadium hearing Tampa……………Bay as opposed to Rai…………..ders. Some might want to give it an asterisk but it would still be a W.

We don’t really know that, Scubog. It is quite possible, if not probable, that we’d have quickly turned the ball over or gone three and out then had the punt blocked, or committed horrendous penalties on offense. There’s no end of ways to eff up a game. And our Bucs found most of them on Sunday. Despite playing at home, against a poor defense, and playing a team that set the all time record for penalties … and still gave up 626 yards of offense to them, and managed to gain a measly 270 yards of offense against them. The… Read more »

I don’t need a recap Naples, I sat through it. I can assure you the Raiders fans thought they were going to lose until the flag came out. There was only 1:38 when the penalty occurred. Bucs would have had the ball and been able to kill all but about maybe 30 seconds and punt it away. As well as Anger punts the ball Oakland might have gotten the ball on their own 40 needing a TD with no times out. I like our chances even though I’ve been through similar situations that went array.

I can think of at least one reason, that reason being how bad the Bucs defense is sucking right now.

Our blitzes actually provided some positive plays. And we sometimes got pressure but not once did I see pressure when we just rushed 4. Pathetic we didn’t blitz more

My thoughts exactly! There certainly were lost opportunities but that one penalty really gave them new life which they capitalized on (unlike us). There’s plenty of naysayers on this, and certainly it does not do much to bemoan what might have been, but with <2min. I think we could have pulled it off. If not mistaken, I believe Raiders had 2 timeouts left. And the D was able to stop them enough to make a 50 yd attempt, which was missed. Game over. Bucs win… That one penalty lost us the game.