One of the few units that had been healthy for the Bucs all season was their offensive line. So it figures that as soon as the playoffs start, they’d drop like flies too. Right tackle Tristan Wirfs was knocked out of the game early with a sprained ankle. Shortly after, center Ryan Jensen and Wirfs’ backup Josh Wells both were injured as well. Jensen didn’t miss a snap despite getting bent back in a pile-up, while Wells gutted it out on an injured quad.

Unfortunately, all three players are in question for Sunday’s divisional playoff game. 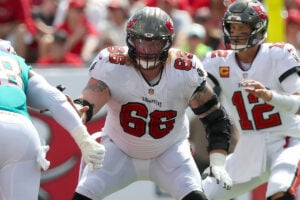 Jensen was down in agony for several minutes, before walking off under his own power. He was in the blue tent on the sideline for awhile, but emerged and went back in for the next possession. The Pro Bowl center was seen limping several times, but never came out of the game.

“His mental toughness is off the charts,” Arians said. “He’s as tough a dude as there is playing this game. That thing was gonna have to be broken for him not to go back in.”

Arians was clear that the questions at tackle are a huge worry going into this Sunday’s game.

“Very [concerned] today,” Arians said. “Hopefully not as much Wednesday and Thursday. But very, very concerned about it today. We were going to have to put [Alex] Cappa at tackle and [Aaron] Stinnie at guard early in the first quarter of that game. Thank God, Josh [Wells] just gutted it out.”

The Bucs also aren’t sure if Leonard Fournette or Ronald Jones will be able to return in the divisional playoffs. Fournette’s hamstring injury has kept him on injured reserve longer than expected. He was originally injured in Week 15 against the Saints. Meanwhile, Jones sprained his ankle in Week 17, and has been out ever since.

“Again, we gotta wait and see if Lenny can open up full speed,” Arians said. “RoJo still isn’t cutting. We’ll know more by Thursday on both of those guys.”

The good news is that the majority of Bucs players who entered Sunday’s game less than 100 percent are healthy. Linebacker Lavonte David and edge defenders Shaq Barrett and Jason Pierre-Paul all played less than usual. But the outlook for all three is positive moving forward. The same can be said of several injured defensive backs, including Carlton Davis, Jamel Dean and Mike Edwards. “They all played good,” Arians said. “Shaq didn’t look hurt when he was running with that ball (after his interception). Lavonte is not as sore as he thought he’d be today. JPP is fine. They all had a good rotation going. They all played about 30-35 plays. Except Lavonte played more.

“[Mike Edwards] has a shoulder/elbow issue,” Arians said. “Got stung pretty good on that one punt protection. But he’s tough too. He’s not gonna miss any time. But Mike had one of his best games too. [Carlton Davis and Jamel Dean] have big smiles on their faces. That was probably Jamel Dean’s best game as a Buc.”

This Sunday, the Bucs will host the winner of Monday night’s Rams vs Cardinals game.

Jensen will play Sunday for sure. Hopefully Wirfs will make it but if he doesn’t I’m hoping they move Cappa to tackle and play Stinnie at guard. I don’t think Wells can handle it, especially against LA or Arizona who both have really good lines.

Play who can perform at a high level and keep Brady protected. If the defense plays like it did we can win with a few backups. We should be able to beat a team on short rest that has to go across the country. Yes it will be a lot harder than the Eagles but this is the benefit of being the #2 seed. The injured people need to be ready for the NFC championship. after that game you get a bye so then its all or nothing.

The games just increase in their difficulty. We need all players who can go, to play this weekend. I’d rather play Cards if I had a choice. I think that’s an easier matchup for Bucs!

Cappa struggled his first year at RT but I would like to think that by now, he could handle it if he had to, especially with someone as Solid as Stinnie next to him. Problem is after Hainsey it gets very thin so hopefully either there are no more injuries or Wirfs and Wells make it back soon. I have a feeling Jensen will go if at all possible. It’s the most important unit on the field so hopefully they end up ok.

i bet they call Earl Watford (or Brad Seaton) to add more option on the practice squad.

Go Bucs, great game.
Hows the health of our 2021 2nd round draft pic, maybe can help out at a few positions? No team, EVER has enough quality backups to blow a second round pic, just saying…
Need the hogs, praying for Wirfs/Jensen’s recovery!

The Bucs didn’t “blow a second round pick” simply by selecting a QB. Of course DrD thinks Licht should have taken a CB, since earlier the team suffered a lot of injuries to the secondary. Now you think Licht should have chosen an offensive lineman, since now the injuries are to the O-line. Note: Licht drafted Robert Hainsey in the 3rd round. He hasn’t played much either. Guess he was “wasted” until…..well maybe now. Too bad Licht couldn’t forecast the injuries that have focused on one position group at a time. If so, he should have drafted virtually any except… Read more »

I’m watching the Ram’s game now! We will need all hands on deck! We will need to bring our “A” game in all 3 aspects of the game: Offense, Defense, and Special Teams. They r solid! It’s like an all-star team. The Rams don’t seem to have the sheer number of injuries that we do. I believe the winner of Sunday’s Buc’s game will win it all!

If they have to they can play an extra TE to help protect-BTW, Brady was getting rid of the ball in 2.1 secs after Wirfs went down-Don’t worry, he knows what to do-