Bucs WR Evans Describes “Play Of The Year” vs Eagles 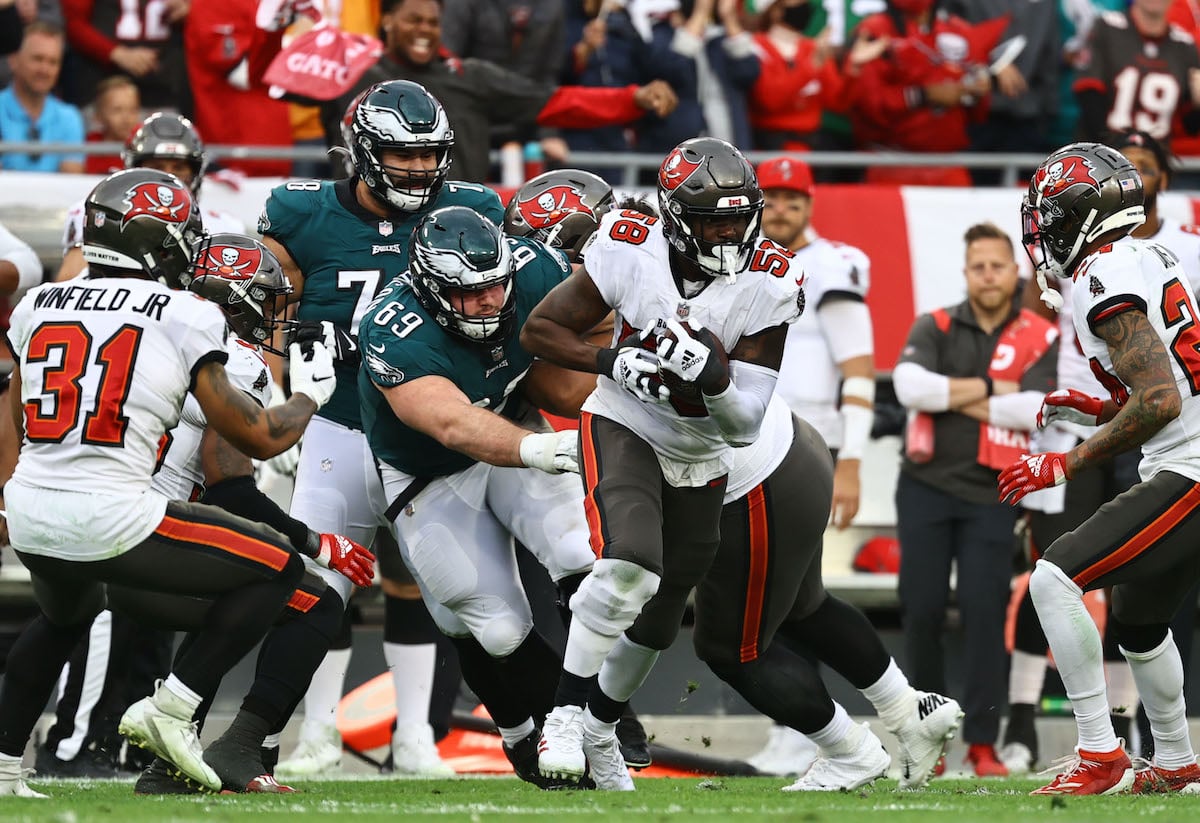 Bucs WR Evans Describes “Play Of The Year” vs Eagles

Bucs outside linebacker Shaq Barrett may not have been 100 percent on Sunday, but Tampa Bay was happy to have him back. While Barrett only played 31 snaps, his lowest total of the season, he still found a way to make an impact. With the Bucs up 24-0, the Eagles were attempting to respond when Barrett’s interception essentially ended the game.

Shaq Barrett missed the past few games with injury but he's back with a huge one-handed INT of Hurts.

2nd of the day for Hurts, who's had at least 3 or 4 more dropped.pic.twitter.com/KiHyTBBcGQ

On a desperation fourth down pass attempt by Philly at the Eagles 46, Barrett dropped into coverage. Jalen Hurts tried to float a touch pass over his head, but the Bucs outside linebacker elevated and deflected the ball to himself with one hand. After securing the pick, Barrett’s 17-yard return nearly put Tampa Bay in field goal range. On the next play, Tom Brady found Mike Evans from 36 yards out for a 31-0 lead.

“Man, that was the play of the year by Shaq Barrett,” Evans said after the game. “That’s not an ordinary play by a defensive lineman/outside linebacker. Unbelievable play by him. Really kind of iced the game for us, I think. We score after that, [quarterback] Tom [Brady] changed my route, actually. Good thing he did because it led to a touchdown.”

Barrett had zero pressures on Sunday, his first game this year without a pressure. But he also only rushed on 20 snaps, and the Bucs were extremely cautious in their rush lanes to not let Hurts out of the pocket. Barrett only dropped into coverage twice, but made the Eagles pay when he did. Head coach Bruce Arians loved the interception, but was even more impressed with how Barrett moved on the return.

“He looked healthy as hell when he was running, didn’t he?” Arians said. “He was [on a pitch count], both he and ‘JPP’ (Jason Pierre-Paul). That’s what’s nice about having that five-man rotation. Being able to use all of those guys and have fresh bodies out there chasing Jalen [Hurts] around.”

Shaq Barrett on his first postseason INT and why he doesn’t want that souvenir ball. #gobucs pic.twitter.com/iv6bBGKCWP

Terrific play … I don’t know how many one handed high point INT catches have ever been made by linebackers in coverage, but it can’t be very many.

What a fantastic play buy such a likable guy too. We’ve got some great people on this team.

That play was incredible. Not many guys his size could do what he did on that play. I love how he gave credit, via the ball, to his strength and conditioning coach, and then ultimate credit where it should be, to God. Hope he gets healthier and stays healthy and keeps making plays for us.

You mean the strength and conditioning coach who some here thought is responsible for the number of injuries and should be fired?