Bucs At Jaguars: Most Disappointing 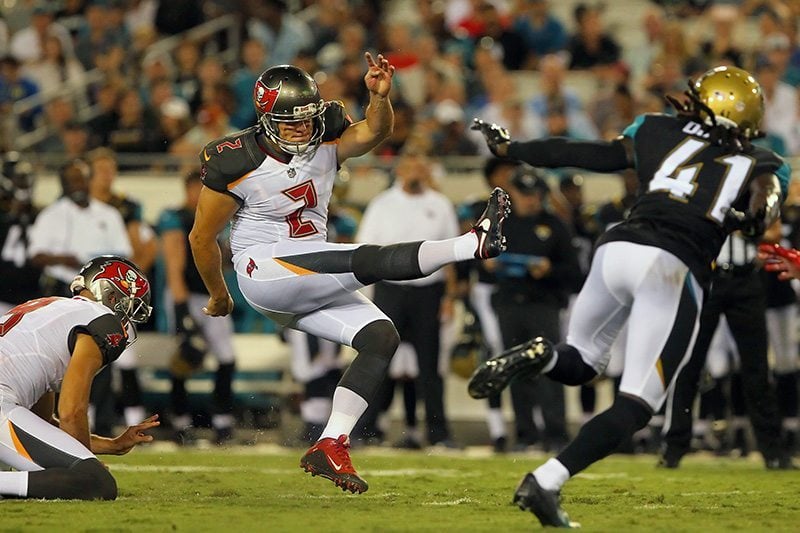 Bucs At Jaguars: Most Disappointing

Even in victory, there are always some things that you can work on. Despite the team winning their preseason battle against the Jacksonville Jaguars, 12-8, there were a handful of players who didn’t have nights to remember. These were our most disappointing players from Thursday night.

It’s hard to blame Benenoch too much here, because he is a backup that was forced to go in with the first team when starting right tackle Demar Dotson got hurt with a groin injury. But, on the other hand, that’s his duty, one that could totally be called on at any time during the regular season. Benenoch really struggled with Jags starting pass rusher Dante Fowler. He gave up at least one sack, had apenalty and a few other pressures. He has to be better if he’s going to be that “first man in.”

Folk’s night looked promising after starting the game 2-for-2 on field goals, but at the end of the night, his stat sheet looked shaky. He may have connected on his first two kicks, but neither of them were father than 35 yards. Plus, he had a PAT blocked, and his lone field goal from beyond 40 yards, he missed. More shaky confidence going into the regular season if this keeps up – even with Aguayo out of town.

Last year Rodgers looked very steady as a running back. He was the guy the team could call on in reserve to pick up some tough yards, and even got his time to shine as a starter for a bit in 2016 – where he average more than four yards per carry. However, on Thursday night, Rodgers just didn’t look himself. He didn’t have the best lanes to run with, but even then, he just looked sluggish or not as explosive. It was an off night for him and Charles Sims.

Hargreaves was one of our top performers last week with an interception and a great push-out play near the sideline at the end of his time on the field. However, on Thursday night, he was getting picked on a lot by the Jaguars No. 1 wide receiver, Allen Robinson, and got burned for it. Robinson ended the night with five catches, most of which were with Hargreaves guarding him. Also, even though it doesn’t show up on the stat sheet that Hargreaves had a touchdown thrown on him, there were two catches where that should have happened (on the same drive) and the receivers just dropped it.

Speaking of getting picked on, it was a tough night for back up cornerback Jonathan Moxey, who was asked to guard Heisman finalist Dede Westbrook late in the game. Westbrook ended the game with six catches for 131 yards and a handful of those catches on Moxey’s coverage. Moxey has been getting work with the second team with Brent Grimes and Jude Adjei-Barimah out with injury. He had a tough task on Thursday night, but and he might just want to burn the tape from this game.

Evans had a game that was disappointing this time around. Also I have to call out all the backup D-linemen for not making a play during the game. Only George Johnson showed up on that final drive.

Because of one dropped pass?

Well, it wasn’t just a pass, it was a sure TD pass, on a team that has struggled getting the end zone last season and continuing to underperform in two preseason games.

He’s gotta make that catch every time. He can do better, and he should.

I meant Justin Evans and his play last night.

Mike Evans and Winston obviously need to seal the deal in the red zone (as SR has said).

When Folk’s PAT was blocked and then missed the 47 yard FG attempt; I had to wonder what John McKay might have said before calling on George Yarno. Why in the world we let Matt Bryant go to the Falcons is still a mystery to me.

Matt Bryant did get into a bit of a slump the year we let him go, but his infant kid died that season. To me we should have given him one more season to shake it off. I strongly believe M. Bryant has been in “F” you mode ever since we cut him which has enhanced his kicking. I know I would be if a company canned me a few months after my infant child died.

Ryan Fitz needs to be added to this list. He hasn’t looked anything like the steady veteran we thought we were getting at backup QB. This team will always be doomed if Winston goes down, but Fitz doesn’t even look like a guy that can keep the ship afloat.

Yes, he could be on here as well. He hasn’t eased any worries.

What are the chances the Bucs keep Ryan Griffin if he comes back before the season starts? Because he has looked much better than “Fits” despite the lesser arm strength as he’s been much more accurate. I don’t mind a game manager type as a backup! It also looked to me like he was starting to pull ahead in the backup QB job especially given the coaches had them splitting drives during the game before his injury. And what if he came back later? Do you think the Bucs keep a roster spot open for him and carry 3 QB’s… Read more »

Yea I ageee Fitz has stunk pretty bad thus far. Not sure what’s up with him.

I didn’t feel good about going into this season with Folk and Aguayo. Had no faith Aguayo would be consistent or ever not past 45. Folk is on downside of his career. Even if he gets consistency back to last years 89% not sure he can hit past 45 either really.

Struggling a bit with Jameis Winston’s performance … during his first three drives, he played great, and the sure TD pass to Mike Evans that was dropped was not his fault at all. Yet, during his last two drives he looked shakey. Not just the wft passes he threw, but just the way he was reacting to adversity, including a stronger JAX pass rush and the holding penalties,he just seemed to revert to the Winston of his first season. He knows he screwed up, his coach let him have it, as Coach Koetter does. It’s a mental thing. He still… Read more »

For you down voters – Coach Koetter said it succinctly after the game about JWs two wtf pass attempts: “Elite quarterbacks don’t make those throws”.

People question the talent of our starting O line and here people are bashing Fitz behind the 2’s! He is throwing to Huff and Martino (Godwin Auclair seem like good targets) so I don’t know why people are this worried. Jameis going down is likely to sink the team regardless and I am not writing this because I believe Fitz is some great QB but playing with the 1’s would surely make him look more competent.