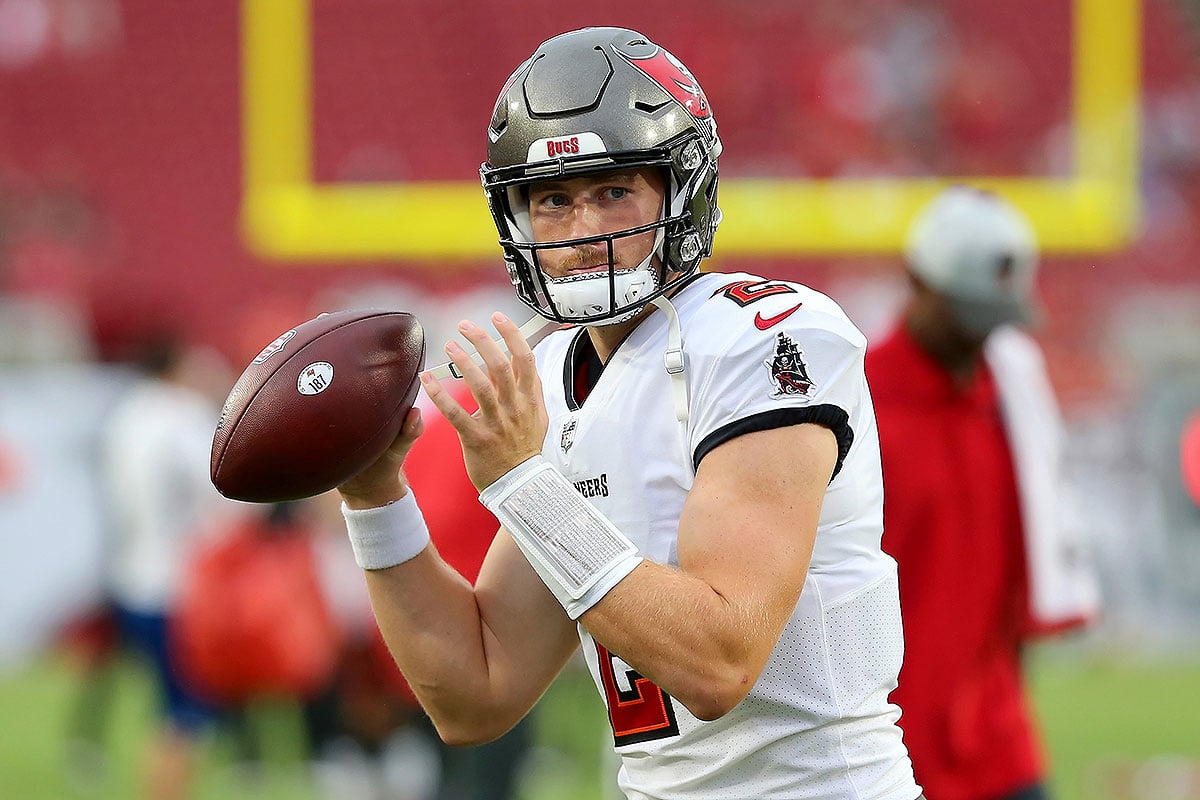 With the seven-time Super Bowl champion back in the mix, Trask went from potentially competing for the starting job to falling back for yet another redshirt year. Tampa Bay is better off for it, and Trask likely is, too. Even still, it has to be difficult for the former Florida Gator in a sense.

While he finds himself in a good situation, Trask won’t see much of the field for the second straight season. Other quarterbacks drafted in his class, such as Jacksonville’s Trevor Lawrence, New York’s Zach Wilson and New England’s Mac Jones, started as rookies. Trask didn’t dress for a single game day last year. In fact, he likely won’t get a chance to see meaningful action until 2023, when he’ll be 25 years old.

However, speaking after Tuesday’s OTA practice, Trask made it clear that he isn’t interested in what he can’t control. Instead, he’s working on taking his game to the next level and making sure he’s ready whenever the Bucs do call his number.

It’s that type of attitude that served him well in high school when he sat behind D’Eriq King. It proved valuable for him again at Florida, where he initially had to sit behind Feleipe Franks. When he finally got on the field, he rapidly became the best quarterback to wear orange and blue since Tim Tebow. His record-setting 2020 season is what landed him in Tampa as a second-round pick.

Heading into the 2022 season, Trask said he is happy with his progress while also recognizing more work needs to be done.

“I’m really proud of myself for the strides I’ve taken [thus] far,” Trask said Tuesday. “I’ve still got a ways to go for sure. But I’m on the right track.”

For Trask, part of being on the right track includes eating better and trimming down. The ultimate result is that, at a lighter weight, he can play quicker on his feet. He already dropped seven or eight pounds – “bad weight” as he called it – while putting on muscle.

“All throughout last year, I really tried to clean up my eating and trim down and just get as quick on my feet as possible,” he said. “And that’s definitely been one of my focal points this offseason. I think I’ve kind of hit my goal weight and now I’m just trying to maintain and just keep on getting quicker.” Trask said fewer cheat meals is the key to his continued progress. He is sticking to steak, chicken, rice and whatever is offered at the AdventHealth Training Center, which he says is healthier. But he’s not only leaner – he’s also more confident. Fourth-year cornerback Jamel Dean said Tuesday that, as someone who is on the other side of the field from Trask, he can see the growth.

“I feel like he’s gaining more confidence in himself. From last year to this year, you can see he just made that huge jump as if he’s getting to understand the game more (and getting) a feel for it,” Dean said. “As time goes on, I feel like he’s just gonna continue to get better.”

More than a year into his time in the Bucs’ system, Trask is getting more and more familiar with everything that’s expected of an NFL quarterback. He is also learning how to read different looks that he’ll see from opposing defenses.

“In college, you grasp a playbook after a few camps and you’re good to go. I think the NFL game is way more complex,” Trask said. “You see a lot more defenses and coverages. Definitely a lot of new fronts and blitzes. Every team has their own scheme and they all have their own packages of fronts and blitzes and coverages and things like that. So, it’s just way more complex.”

“He’s picking up the scheme well. He’s making all the right reads right now and we’re getting to see him in some competitive periods that’s making him make some quick decisions,” Bowles said. “And we like what we see.”

Another Year For Trask To Learn From Brady

The Bucs drafted Trask knowing they had Brady under contract for 2022 and 2023. So, if anything, this was the plan before Brady’s brief retirement. And now that he’s back, it’s business as usual. Who better to learn from than Brady? A quarterback doesn’t play more than two decades in the league and win seven Super Bowls by accident. His work ethic and preparation are the stuff of legends. Trask gets to see that firsthand. “He prepares like no other. He prepares more than I’m sure a lot of other quarterbacks in this league are willing to do. That’s kind of what separates him,” Trask said. “Ultimately, it comes down to his love of the game and wanting to be the best. That’s just a really special opportunity for me to be able to see that firsthand … I’m gonna try to see how much more I can learn from him this year.”

Between the work ethic, attention to detail, mastery of the offense and all of the wisdom that comes with more than 20 years in the NFL, Brady has a lot to offer a young quarterback.

We’ve seen such arrangements work before. Aaron Rodgers sat behind Brett Favre for three years. Patrick Mahomes backed up Alex Smith during his rookie year. The Titans are hoping the same type of results occur with 2022 third-round pick Malik Willis working with Ryan Tannehill. Whether it works for the Bucs with Brady and Trask remains to be seen. But for now, the 24-year-old isn’t taking the opportunity for granted.

“Luckily, I’m in a really good room of quarterbacks and I get to learn from them every single day,” Trask said. “And I think that as long as I just keep stacking these [good] days, then I’m on the right track.”

Whether the coaching staff likes it or not, Trask should be the back Up for Brady as Brady is gone after this Season. We have to see where he is and can he get better. Only one way to fine this out; play him as the Back Up to come in for Brady to clean up after we are way ahead or way behind. Go Bucs!

Well the caliber of players that Trask would be able to play with as a #2 in the off season is much higher and it would really show where he has improved and where he is still weak at.
But for the start of the season I think Gabbert backs up Brady because Brady needs a vet to help him for game plans during the week and during games. But it wouldn’t hurt to see Trask play with the 2s with most of the off season IMVHO.

I agree if he can’t even compete for backup his second year doesn’t speak for much confidence thus far.

Only in your warped negatory mind is Trask “unable to compete”. The competition such as it is is determined by the coaches and the players, not by numbskull internet commenters.

Naplesfan, you have to be Trasks agent, relative or boyfriend because you take everything so personal about rubber arm boy.

This is really the perfect situation for a young quarterback in the NFL – no immediate pressure to deliver on the field when his knowledge of the NFL game is necessarily limited, like all first or second year quarterbacks face no matter how much talent they have. Yet he can “learn at the knee” from the GOAT, and observe and absorb whatever he can of what it is that make Tom Brady great, which has far more to do with what is in his head than in his arm. At some point Kyle Trask is going to be asked to… Read more »

Until he plays in pre season I really don’t see how they could have any idea of he’s improved or not. Improved over what he’s never played? Will see.

Of course you are utterly ignorant of such things … you’re just a mindless and extremely critical internet commenter, not a coach who’s been working continuously with the player for the last year plus.

Really, stop, just stop embarrassing yourself. You really don’t have to keep proving you’re the dumbest most negative nancy commenter in these threads. You’ve already established your supremacy in that rather sad corner of the world.

Naplesfan, you crack me up spewing all that venom. Hilarious stuff.

You see last year at this time he was doing the same thing he is now, practicing without pads, making reads and throws in 7 on 7’s and 11 on 11’s and compared to how he was doing at this point last year he has improved.

totally agree; he needs to get into real NFL Games. Lots of players look great in preseason; then regular season starts and they are lost; this is when you learn whether they are keepers or not. We need to take a chance and let Trask be our back up; not Gabbert who has shown us what?

We’ve sure had our share of QB hopefuls who caused a stir in Bucville during the preseason. We longtime fans should recall the name Jerry Golstyne (spelling?), who entered a preseason game, and for one quarter looked like Dan Marino. He was quickly named the starter. In that first real game he looked more like Rita Moreno. Then there was my favorite of all time, Randy Hedberg, who had another great quarter in a preseason game against the Baltimore Colts. Bucville was sure our “savior” had arrived. “Why not Minot?” was the cry, but it didn’t last long. I simply… Read more »

Scubog, I hear you coming from the past. Before Brady decided to come back, Gabbert was going to start and Trask was going to be the back up and would get chances to come in and play. what has changed for Trask? He’s no longer going to get a chance to grow. In this timeframe in the NFL. There is little patience for a player to sit on a bench for 2-3 years and never play, unless you are a career 3rd stringer. I don’t believe Trask is there for this. Either he gets a chance to play some or… Read more »

I don’t think Trask will become another Ryan Griffin at all. Assuming Brady plays the entire 2022 season and retires for real, I suspect if Trask has demonstrated his readiness to take the reins between now and a year from now, I believe he will unseat Gabbert and be the starter in 2023. He was drafted for a reason. The reason approaching.

There is no better situation for a young QB to be in. I just hope the staff takes a chance and gives him a shot to play some meaningful snaps and see where he’s at against real competition.