This is a huge “prove it” season for many Bucs players that want a second contract. Many of those players happen to be in Tampa Bay’s secondary with cornerbacks Jamel Dean and Sean Murphy-Bunting and safety Mike Edwards all entering a contract year.

Of the three players mentioned, Dean has spent the most time as a starter and probably has the least amount of competition around him to jeopardize his position.

Murphy-Bunting struggled in the slot last year, prompting the Bucs to bring in Logan Ryan. Edwards has a great opportunity in his first year as a full-time starter. But if he can’t adjust to the increase in playing time, Tampa Bay also has Keanu Neal as an insurance policy. Plus, Ryan can play there as well.

That leaves Dean with competition such as reserve corner Dee Delaney, a former undrafted free agent, and rookie fifth-round pick Zyon McCollum out of Sam Houston. Long story short, only Dean can stop himself from earning a second contract. 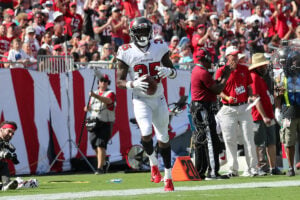 Is it something that he’ll think about and focus on this year? Or will Dean put it by the wayside and not let it be a distraction until next offseason? Dean answered that question Tuesday.

“I use it as motivation,” Dean said. “Because I’m treating it as if this could be my last year probably ever playing football again. Can’t take anything for granted so I got to give it my all.”

This has actually been a part of Dean’s routine since last season.

“I did towards like the second half of the season,” Dean said. “But this year, it’s for real now. Just got to improve my game so I can end this year off a good note.”

They say health is wealth, and that’s a huge part of where the corners are trying to improve this year. Dean missed two games last season while also leaving two others – at Los Angeles and at Indianapolis – very early. Carlton Davis III missed seven games and Murphy-Bunting missed eight among the starters.

“Mainly taking the offseason serious enough to get our body prepared for the season,” Dean said on how they can take the next step. “And also just put my game mentally, going back to what we did wrong and I can better going into this year.”

One of those areas where all three cornerbacks need more work is picking off passes. Dean has just five interceptions in three seasons, including a pair last year. Davis only had one pick in 2021, while Murphy-Bunting didn’t record a single INT.

“That’s probably where I’ve really been lacking is the interceptions,” Dean said. “One or two a season – that’s not enough compared to players that are getting five to 11. I always want to be in the top category in that. So that’s why I’ve got to improve my mental aspect of the game. And that’s why I’ve been taking advantage of all the OTA reps I can get just to try and perfect my craft.”

And if Dean didn’t have enough motivation for the pay day, he can just look over at his friend Davis. The two have known each other since high school and played college football together at Auburn. Davis got his contract this offseason, and it’s proof that the work can be put in to get his own.

“I told him I was happy for him,” Dean said. “I honestly could’ve cried because that’s how happy I was. I’ve seen the whole grind from high school to college to the NFL – it’s inspiration for me. I’ve seen you do it, [so] now I know I’m capable of doing it too.”

Dean has good chance to stick around pats this season if he can stay healthy and keep playing well. SMB stinks imo. Guy has just been terrible and doubt he’s better this year. Add in SMB can’t stay healthy and he stinks. I see Logan Ryan taking his job at some point this season.

I don’t think anyone is high on SMB, not even the coaching staff, hence the reason for the Ryan pickup. I hope Dean does pick his game up but it has been good, not great so far. Still, even if he dies get better, I don’t see the Bucs paying Dean Carlton Davis type money.

Dean has the make up to be a top CB in the league. He’s got the speed and the instincts, he just seems to need some maturity in the position. He wasn’t forced to start early like Davis so Dean is still going through his learning curve. He still has to take that next step, but if he does he will be lights out.

The “weak link” on the team the past few years has been the secondary. It’s good to hear these young guys saying all the right things. I hope to see that translate on the field, as once that hole is filled I can’t see how anyone can hope to beat this team.

I’ve always rooted for him since he got torched in the Seahawks game as a rookie. He recovered really well. Also, I couldn’t believe how big he was for a DB.