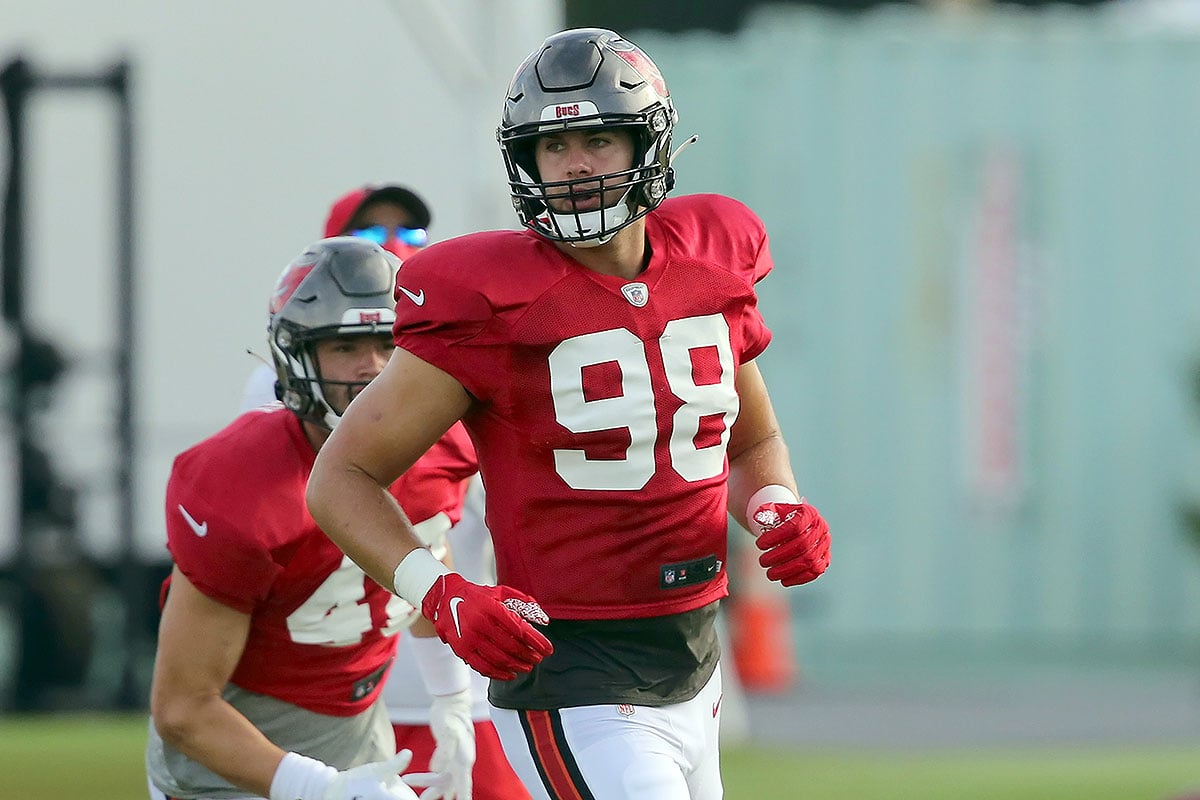 The Bucs don’t have many starting spots up for grabs heading into mandatory mini-camp, but plenty of roles remain available. On one of the toughest rosters to make in the NFL, the competition should be elite starting Tuesday morning through the end of preseason action. Tampa Bay’s mini-camp will offer several players to watch, with many returning to the field on Tuesday for the first time since the Super Bowl.

Here are some of the best players/battles to watch heading into mini-camp this week. Mini-camp practices will be open to the media on Tuesday, Wednesday and Thursday mornings. PewterReport.com will have extensive recaps of each practice every day this week.

The best competition of mini-camp and the preseason is going to occur in the Bucs wide receiver room. Spots 1-4 are probably set in stone thanks to Mike Evans, Chris Godwin, Antonio Brown and Scotty Miller, but a fifth option could earn situational playing time on offense. The Bucs will almost certainly keep six receivers on their final roster, with some (this author) predicting they’ll keep seven.

The battle for those final 2-3 spots begins in earnest on Tuesday. Tyler Johnson has the inside track for the No. 5 receiver spot, but will his lack of impact on special teams hurt him? He needs to show improvement as a coverage option on kick teams, while continuing to build on a solid rookie season at wide receiver. Johnson’s ability to be a mini-Chris Godwin is something the team really wants to develop. Jaelon Darden might not be the fifth-best wide receiver on the team when the season begins, but he could be a lock for the game day active roster if he seizes the return job. After the Bucs traded up in the fourth round for Darden, it all but ensured he’ll be a factor this season. But will his impact be felt on offense at all? Darden has lit up rookie mini-camp and OTAs as a wide receiver, but now the competition gets tougher.

The odd man out might be Jaydon Mickens, but not because of anything he did wrong. Mickens was a solid returner for the Bucs last season, although he lacks splash play ability. A smart, sure-handed return man, Mickens has also impressed as a pass-catcher during OTAs. But he’s not the receiver Johnson is, lacks the upside Darden has and won’t be the punt or kick coverage contributor Justin Watson has proven to be. It’s a tricky spot for Mickens, who shouldn’t have a problem making a roster elsewhere.

Watson is the least intriguing offensive option, but one of the better special teamers on the Bucs roster. The Bucs leading tackler on special teams last year, Watson is a top option on kickoff and punt team. He can be a four-phase special teamer on a team looking for answers on those units. When your sixth receiver suits up on game days, it’s to play special teams, not wide receiver. That’s a role Watson will fill better than Johnson or Mickens, if the Bucs can’t find specialists at other positions.

It’s been a rocky road for Vaughn in his brief NFL career, as he dropped four passes on 11 targets and fumbled twice in 2020. Now Vaughn is looking up at an improved running back room that added a free agent at the one role the second-year back was likely eyeing up. Giovani Bernard is set to be the team’s leading third down/2-minute back, while Leonard Fournette and Ronald Jones carry the load on the ground.

The trio has left Vaughn on the outside looking in, but the Bucs haven’t brought in much competition for the No. 4 spot. Journeymen C.J. Prosise and Troymaine Pope will do what they can, but it would be a shock if Vaughn didn’t make the team. It would also be a shock if he’s active on game days unless there’s an injury. Vaughn has to show improvement as a pass catcher during mini-camp, while also picking up a special teams role. The Bucs know what to expect from basically their entire interior defensive line, as the veteran unit returns in full from a year ago. The one unknown is Davis, who appeared in just two games last year and was widely seen as a developmental option. Now the Bucs are hoping some of that development has occurred, at least enough for Davis to play a rotational role this season.

A highly athletic defensive tackle, the hope is that Davis can at least offer an explosive pass rush option, capable of giving Ndamukong Suh or Will Gholston a break on long-and-late downs. Mini-camp won’t be as good a measuring stick for Davis as preseason action, where he should expect to play a ton this year. But it will provide insight into how Davis is building a repertoire of moves to win on passing downs. That’s a critical part of his offseason development that we should witness this week.

This one is pretty simple. Howard suffered one of the few common injuries that still has a questionable recovery process in Week 4, tearing his Achilles. Head coach Bruce Arians has given rave reviews on Howard’s recovery, but this week could be the first time we see him back on the field. There’s a good chance Howard is limited if he does play, so expectations should be tempered. Still, it’ll be great to get a glimpse of Howard’s movement following major surgery. 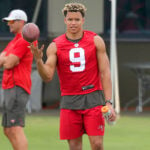 Last, but certainly not least, this week should give Bucs fans their first glimpse of Tryon in an NFL setting. It’ll also be the first time Tryon has taken the field since 2019, his junior year in college. The 2020 opt-out has been recovering from a minor knee scope, but should be ready to participate in mini-camp.

The first step for Tryon will be beating out incumbent No. 3 edge rusher Anthony Nelson, who is entering his third year. Nelson has recorded just one sack over his first two seasons, showing very little as a pass rusher. Still, Tryon will be rusty in his return to practice. Can Tryon show that he’s improved some of the technical bad habits that limited him at Washington? Will he have more of a go-to plan as a pass rusher? This competition will be fun to watch in mini-camp.

As you implied, Jon, the third tier players on this team are not necessarily playing for a roster spot on the Bucs, the hardest roster to bust into in the entire league this year .. but may be playing for a roster spot on other needier teams. We can bet that the other 31 NFL teams are going to carefully review the performance of our lesser talents throughout pre-season, particularly watching pre season game tape, and see what they can glean from our leavings on the table, like a bunch of hungry rats or mice! Expect our practice squad to… Read more »

Looking forward to hearing about Darden and Tryon.

How about QB2, back up ILBs, as well as the last cornerback and safety spots?

I’m following the DT & TE spots because of the aging and injured players.