Bucs linebacker Devin White can sometimes divide opinion within the fan base. Is he a top off-ball linebacker, or is he too often a liability? Should the team be locked in on giving him a big-money contract, or should decision-makers be in wait-and-see mode?

Whatever your opinion may be, you’re likely to cling to it pretty strongly. And that’s why Pro Football Focus’ redraft of the 2019 NFL Draft will be polarizing for the Tampa Bay faithful.

The Bucs selected White with the No. 5 overall pick in 2019. At the time, it was an interesting situation to watch unfold. Drafting an off-ball linebacker that high isn’t typically considered best practice, but for a player with as much potential as White, you can maybe make an exception. Jason Licht and his staff clearly felt confident about the former LSU Tiger coming in and being a difference-maker. And given his role in Tampa Bay’s Super Bowl LV run two seasons ago, can you really say they were wrong? Former Pewter Reporter and current PFF analyst Trevor Sikkema broke down this 2019 redraft and admitted as much, at least with respect to White’s role in the team’s Super Bowl season. Of course, he has an interesting perspective of this selection particularly. Going back and doing the draft all over again, would Sikkema have the Bucs sticking with their pick?

The answer, actually, is no. Instead, he had Tampa Bay taking Titans Pro Bowl defensive lineman Jeffery Simmons at No. 5.

“This re-selection might be divisive. On one hand, the Bucs probably don’t win their 2021 Super Bowl without Devin White. His speed and play-making ability as a blitzer and around the line of scrimmage (especially in Todd Bowles’ defense) were key parts of why Tampa Bay was able to hoist the Lombardi Trophy,” Sikkema wrote. “On the other hand, was the individual return on investment of an off-ball linebacker at No. 5 the best choice? Adding the benefit of hindsight, I’d say no.

“Trying to keep things somewhat realistic regarding what each team would have been looking at on draft night in 2019, the Bucs were just months away from moving on from Gerald McCoy, which means this draft was well before they acquired Ndamukong Suh. Drafting Simmons instead means they’d have the best young defensive line in football in 2022.”

Was White The Right Or Wrong Choice For The Bucs In 2019?

White had an interesting debut season. He got a late start to the year, but ended up starting 13 games. He totaled 91 tackles (58 solo), 2.5 sacks, three forced fumbles, four fumble recoveries and an interception. It was a promising start to his career, and he followed with a big year in 2020. In that sophomore season, he posted 140 tackles (97 solo), nine sacks, 16 quarterback hits, a forced fumble and a fumble recovery. Then, in three postseason games, he racked up 38 tackles (27 solo), two fumble recoveries and two interceptions.

During parts of the 2020 season, White looked lost in coverage. The big plays largely made up for it anyway, but then he had a playoff run that saw him properly handle all aspects of his game extremely well. That raised expectations for his third season, but in a way, he took a step backward in 2021.

The splash plays were less frequent and as much as White likes to use his speed, he played too fast at times. Over-running the ballcarrier or over-pursuing in coverage became a regular issue. All of that aside, though, he earned his first Pro Bowl nod. He finished with 128 tackles (87 solo), 3.5 sacks, 18 quarterback hits and a fumble recovery. This offseason, the Bucs picked up his fifth-year option, meaning he has two seasons remaining on his rookie contract. 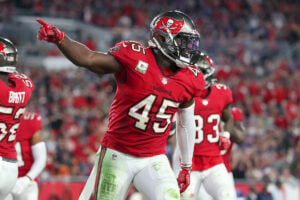 As one of the defensive captains, White plays a major role on a playoff-contending team. His speed and athleticism are second to none, and he knows where he needs to lock in and improve. The Bucs have to love what they’ve seen from their 2019 first-round pick.

But as Sikkema laid out, Simmons fit well for Tampa Bay at the time. The former Mississippi State standout just had a breakout season in 2021, earning his first Pro Bowl selection after tallying a career-high nine sacks and 16 quarterback hits. With McCoy on his way out at the time, Simmons could’ve stepped right in next to Vita Vea and made for an insanely impressive interior defensive line full of youth.

With hindsight, you can see where Sikkema’s line of thinking is. And while he’s not necessarily wrong, it’s hard to feel down about how things have turned out. White was a key member of Tampa Bay’s run to the Lombardi Trophy two seasons ago and he has all the tools to be a massive playmaker for the Bucs in the long run. He has two seasons left to prove why he deserves a big second contract in Tampa.

Plus, there’s an argument to be made that the team’s defensive line heading into 2022 might be one of the league’s best anyway. Maybe it’s not one of the best “young” defensive lines, as Akiem Hicks is 32, Will Gholston is 30, Vea is 27 and rookie Logan Hall is 22. But that’s a formidable group. And having them paired with the hungry, hard-working White, who is still only 24, leaves the Tampa Bay defense in a good spot as it looks to replicate its 2020 success and get back to the Super Bowl.

Man I hate to disagree with Sikema but he couldn’t be more Wrong. No question Devin White was the right choice for the reason you stated and more. Jason Licht & BA were banking on his Potential and not just the raw talent he flashed on tape. You say he took a step backwards but he made his 1st pro bowl, statement on its own makes no sense. Most kids start their careers 24yrs old Devin’s about to play in his 4th nfl season and is one of the top LB’s in the game just let that sink.

He absolutely took a step back last season. His coverage was worse than the year before (which is hard to do) and his lack of football IQ was glaringly obvious. He wasn’t able to land flashy sack numbers to make up for his big-time deficiencies.
Lol @-- him being one of the Top LB’s in the game. He’s not even the best LB on his team.
You burn a Top-5 pick on a LB, then he better be the next LVD or Kuechly.
White isn’t even close to those guys.

A lot of people said the same thing about Derrick Brooks too. I know it’s hard to fathom now- with the career the man had. It took about 4 years for no.55 to become that feared LB. Look at his stats it was in his 4th or 5th year where his big plays really started showing up- he didn’t make his 1st pro bowl until yr. 3. Now please don’t get me wrong- by no way am I saying no.45 is the next no.55. I am saying the kid’s shown promise. If he can get his head out of his… Read more »

So this exercise was about redrafting the 2019’ class So who should the Bucs have drafted???
I’ll stand by my comments that Devin White was the right choice! What say You?

I agree with Trev on this one.

100% he took a step back last year. I was adamant when he was drafted that you can’t take an off-ball LB that high. He made the Pro Bowl on name alone.

The Bucs have a history now of rewarding their best players handsomely. White has two years to prove he is worth that $20 million a year contract he dreamed about as a rookie. White isn’t an idiot, he knows his play regressed last year for the reasons you stated. He says he is working on improving his weaknesses and his appearances at the OTA’s appear to back that up. If he can improve his coverages and get his sacks up near the double digits, there will be no more talk about whether or not the Bucs made the right pick.

Wouldn’t have changed a thing…45 is the missing piece that this city and team needed..a heat seeking missile with an attitude like Ray Lewis..I mean, I’m not the only one that compared the both in that aspect…White is the voice that LD54 wasn’t..Let the kid play. A step backward? Wasn’t he injured to some degree also?? Cmon.

What I like most about Devin White is his obvious speed, outgoing personality and attitude because they can’t be taught. The greater understanding of the defense, playing under more control and developing coverage technique can all be taught as long as the player wants to learn. Clearly #45 has the desire and work ethic. We haven’t seen the best just yet……….it’s coming. Perhaps when both Simmons’ and White’s careers come to an end, Trevor will have a different opinion.

To me exercises in should of would of could of are annoying and I don’t really do it. Bottom line is he’s got elite speed and power. He regressed last year and needs to play better this year. He knows it and we know it. I still think potential is there to be perennial pro bowler.

I’m going to have to agree with you on this one Fred. Linebackers need to tackle and 128 is still a damn good number in a step backward year. Obviously could have been 150+ if not for overrunning plays. The young man is no idiot and knows his shortcomings. Simple fundamentals and breaking down when approaching the ball carrier rather than looking for “highlight” hits along with more mental discipline in coverage will get him back on track. Yes, he’s a pro, but pros still need coaching to reach their apex. The staff will help him get it all together.