Bucs LB White Knows Where He Must Improve In 2022 Bucs LB White Knows Where He Must Improve In 2022

Drafted No. 5 overall in 2019, White was the first linebacker taken in his draft class. This past year, White enjoyed his first Pro Bowl nomination. Last offseason, White was named among the top 10 linebackers in an ESPN poll of 50 NFL executives and coaches. To say people believe in his potential would be an understatement.

These accolades have been the result of White’s impressive physical gifts. With elite speed, agility and tackling, White has the tools to be the absolute best in the league. 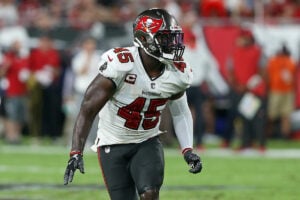 Despite his obvious gifts, White has still not put it all together. The final piece of the puzzle for White has been his consistency in pass coverage. He has posted PFF coverage grades of 57.4, 39.8 and 43.5 over his first three seasons. And it would seem White recognizes this.

When asked about what he has been working on with his new inside linebackers coach Larry Foote, who played linebacker for 13 years in the NFL, White pointed to that aspect of his game.

“Even when he wasn’t coaching me, he’d always say, ‘Go watch me when I played here. I had this, this, this.’ So, he’s just been drilling it in. I’ve been liking it, just coming from my background, having just a lot of man-to-man (and) chasing running backs type of background,” White said. “All of the zone stuff, the route concepts, everything is still like a walking book. Like, I’m reading and I’m learning as I go. I think he’s doing a tremendous job. I’m not nobody that can’t get enough tools in my toolbox, like I still want to learn and I still want to play fast and at a high level. So, I’m thankful for everything he’s giving me right now.”

If White is able to elevate his play in coverage, he can enter the upper echelon of off-ball linebackers in the league, joining the ranks of teammate Lavonte David, Darius Leonard, Fred Warner, and Demario Davis. The Bucs have already picked up his fifth-year option for next season. With a likely contract extension looming, becoming better in coverage will go a long way toward White earning the payday he has been working for his entire career.

I love a white and have his jersey. That said I’m sorry but his coverage skills aren’t his only issue. He was out of his gap and free lancing which contributed to big run gains at times and he contributed to Bucs defense sliding to 3rd against run this year instead of first.

Third’s no good, right Fred? You’re right about White being a bit of a wild man out there at times; especially when he thinks he has to make up for LVD being out and playing alongside Minter, whose play really fell off last year. At least White recognizes it and is taking steps to tone it down a little……..just a little. It’s really becoming his team.

If White can improve his pass coverage and get more focused in his pass rush he can be an elite LB. When that happens the Bucs will have the best LB corp in the NFL.

His comments are really encouraging. If he can make the splash plays while remaining disciplined he’ll be a force. Honestly he kind of need to in order to justify using the #5 pick on a LB.