Bucs left tackle Donovan Smith isn’t the most popular offensive lineman on the team. Some Bucs fans see him as a serviceable, while some think far less.

On Thursday, Smith stood at the podium and PewterReport.com asked the former Penn State product about comments from George Warhop – his position coach – who last year said Smith has the talent to be one of the best tackles in the NFL. 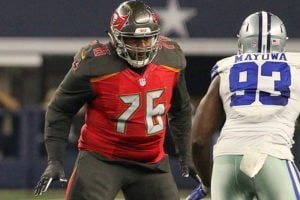 Confidence is nothing that Smith lacks, even if a segment of fans would like to see him replaced or moved to right tackle. However the organization likes Smith, and sources have told PewterReport.com the team would like to lock him up to a long-term deal, possibly before the 2018 regular season begins.

Smith graded out far from one of the best tackles in the NFL, inc fact, according to PFF, Smith was rated at No. 53 in the NFL with just a 51.9 grade.

In fairness to Smith, he had to play next to two different guards last season, and many times it was a different player every other series. Despite the inconvenience of not knowing if it would be Kevin Pamphile or Evan Smith next to him on successive drives, Smith surprisingly said it really wasn’t an issue for him.

“It wasn’t difficult at all,” Smith said. “I’ve had snaps with Evan, I’ve had snaps with Kevin so they knew how I played, I knew how they played. It was just that tap on the shoulder, ‘Hey, I’m in.’ It’s kind of just triggered you, you knew how to do things. Like you said, we worked through it all throughout practice and training camp and stuff. Preparation factor, when you prepare for it, you don’t really have to adjust to anything. There’s really no difference. So, between those two coming in there, in terms of difficulty, no.”

While Smith took the high road when asked about the platooning at left guard, he did welcome the news that Marpet would be his partner in 2018.

“That’s big. When I heard that, I texted Ali and said, ‘You could have told me that before I had to find out through the media [laughs].’ It was good. We worked together at the Senior Bowl, left tackle, left guard. It’s really just getting a feel for each other. Obviously Ali is a great player and any time you get him next to a guy, it’s going to make us better. He played at a high level at right guard and a high level at center and he’s going to play at a high level at left guard if that’s how it works out. He’s a great guy. He’s a competitor.”

Bucs general manager Jason Licht recently said he wanted to get tougher in the trenches on both sides of the ball. Smith agreed that can set the tone for the whole season.

“A football team thrives off of the offensive line,” Smith said. “Without the offensive line, defensive line, there’s really no football, it’s 7-on-7. You have to have those guys up front, big, mean, tenacious guys who are going to push each other and take lead and change of the team because, like I said, there’s four to five of us on the field at a time. It’s almost a must to have a great defensive line, offensive line to – accountability, mental toughness, discipline, all of those good things, to tie them together. So, that’s what we have from top to bottom on both sides.”

The power of positive thinking. If he doesn’t think it, who else will? I wrote a book once titled “The world’s three greatest men and how I met the other two” lol. Donavan, just hold your block long enough for the ball to get off. And Winston, throw the damn ball. We’ll be just fine! Go Bucs!

I hope he is correct!
BECAUSE IT WILL HELP ALOT!

I bet the reason Marpet is going to left guard instead of back to right is because with Marpet, you know what you are going to get and the Bucs are hoping that stronger guard play will help Smith play better at tackle. If you think about it that way, you understand the move to left guard better.

He better learn how to move those cement blocks he calls feet then, cause he gets BURNED by elite pass rushers…

Everybody gets burned by elite pass rushers.

Dotson was an undrafted free agent who developed. Smith has some flaws in his game, but the OL was weak around him as well.

Fans are way to quick to pull out their pitch forks. The bucs are young at alot of key high liability spots. Im willing to bet that Donovan Jameis and VH3 will all be fine. The spotlight is brighter at those spots. If you screw up it is very obvious. But how many LT, CB, and QBs come in and take the league by storm. Baktiari, Xavier Rhodes, and almost every qb takes their lumps early and grow because of it. This could be a big year from those three which is huge because to have young studs at 3… Read more »

Charlie
Reply to  The Freeman

Not saying necessarily let go yet, but better be reasonable considerable under market contract with all the “supposed” good linemen coming out next year…we’ll see though

The Freeman
Reply to  Charlie

Sure not yet but he need to improve in a big way if he want a big contract on this team… until now he isn’t worth it!

Definitly an interesting class in 2019, Jonah Williams from Bama is one of my favorite OL in college… and the DL class is too good…
Hopefully they draft in the trenches next year!

Charlie
Reply to  The Freeman

I hope so too, and it sounds like Lucht will from the sounds of his interview on GMFB the other day…would make sense….

I really don’t care what PFF thinks. What I see is Donovan Smith playing very well with the exception of a play or two each game that seems to stand out. We should all recognize that he was a college Junior when he came out and is still developing. He only needs consistency.

I feel like I’m really close to hooking up with Pamela Anderson. Reality dictates neither of us are as close as we think we are.

Smith’s problem is he is a low motor player. Low motor players never become top 2 or 3. I see no chance for him but I’m hoping for the best.