Bucs’ Smith Would Like To Return To Tampa; Believes Winston Is A Franchise QB

Home » Articles » Bucs’ Smith Would Like To Return To Tampa; Believes Winston Is A Franchise QB 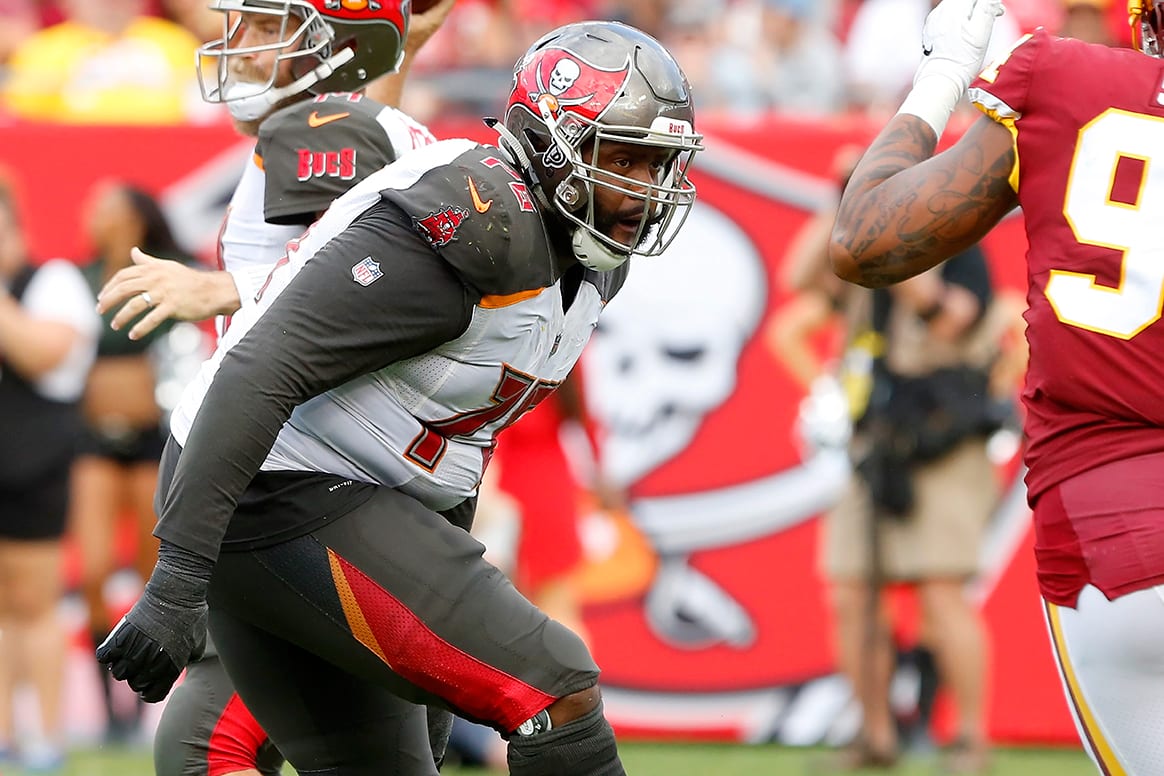 Bucs’ Smith Would Like To Return To Tampa; Believes Winston Is A Franchise QB

Home » Articles » Bucs’ Smith Would Like To Return To Tampa; Believes Winston Is A Franchise QB

Set to become a free agent on March 13th, Bucs left tackle Donovan Smith went on the NFL Network’s “Good Morning Football” to discuss going through free agency for the first time, if he would like to remain in Tampa, his teammate Jameis Winston, and also reminisced about his performance at the NFL Combine.

While he said that most of the process consists of putting the negotiations in his agent’s hands, Smith would like to return to the Bucs.

“I hope so,” Smith said. “I love Tampa, the community, teammates, everybody there. I’ve kind of established myself there, so why not?”

He also defended his quarterback Jameis Winston, who had a difficult year in 2018. Some critics have harped on Winston for some of his antics including “eating a W” and still have doubts about his leadership and passing abilities. Smith shot down any of those thoughts that Winston is anything less then a top quarterback.

“They don’t know a thing about Jameis,” Smith said. “He’s the most humble, coolest guys to be around. He’s all in, he loves his teammates dearly because he wants you to succeed, it’s all real. If you were around his family and close friends, he’s like that 24/7.”

When asked about whether Winston is a franchise quarteback, Smith took less then a second to think about it.

Whether or not Smith will be around to see if Winston improves in 2019 comes down to if the Bucs front office decides to sign him to an extension, let him go into free agency, or place the franchise tag on him to give him another year to prove himself.

Smith has played in 64 straight games since entering the league, but even in a contract year, he was inconsistent on the season. Smith has said he has talked in depth with new head coach Bruce Arians at the facility, as the Bucs hope that new coaching voices in front of him will get the best out of Smith in 2019, should the team roll the dice on him.

"I love Tampa — the community, my teammates, everybody there."

yes until we find a better LT, we should not reach for LT with 5th pick. he can move to RT if we find better LT. Maybe we get lucky in later rounds of draft or we trade down from 5th pick. Ed oliver & bama LT or gator LT, if we find trade down partner. Raiders lol. Smith is durable & a better RT. would shorten the journey to contender. could give real depth across the o-line & new blood to a bad defense. Unfortunately I have little faith in the GM to pull off those off season moves.… Read more »

I have read here, PFT, Rick Stroud/TBT, that the Bucs will try to extend OT Donovan Smith. If unsuccessful, they will franchise him. If they attempt to extend him, these are things that will work in their favor. Donovan loves Tampa (community), Donovan loves the Bucs, and Donovan really loves Ali Marpet (best buds). He wants to be here! Trust they will work something out. Go Bucs!

I want a Franchise LT so bad but the hole at RG and possible RT is bigger right now… I still say if we can extend with low guaranteed money we can draft someone that will take over at LT at some point, then move Smith to RT and restructure his deal… And if he improves this year then all for the better…

This is so disappointing. High draft pick, expected to be LT cornerstone for 10+ years and the consensus is we’ve got to pay a fortune to an under performer because we’ve got no choice. What a waste.

Hopefully BA can be a LT Whisperer too.

What a refreshing team first attitude! The polar opposite of D.Jax and Brent Grimes.
I love his allegiance to:
1. His QB
2. His teammates
3. The organization
4. The community

For all the disapproval he receives from some fans, he has outplayed his draft position, his draft class, his contract, and kept his head down and worked. Over 1000 plays per season!

Name a single tackle from his class that outperformed him. Erik Flowers and a bunch of nobodies in that class! Bucs landed two studs in Smith and Ali. Keep em together!

Yeah I here Sombrero, the problem a lot of Bucs fans have on here is that they think if he’s not the best left tackle or the best LB or the best QB Winston then he’s a bum, can’t play so let’s cut him. I have seen this attitude from fans my whole Buc life and its the reason why we didn’t re sign players like Doug Williams or Michael Bennett to name a few.

Ive been a BUCS fan since they have been a team…The reason Doug Williams or Micheal Bennett was not re signed was not because the fans thought they were bums, Doug Williams and Bennett were both loved by the fan base. They were not resigned because of Money the front office made the decision to let them walk not the fans.

I can assure you that there were a lot of fans back in those days that were happy to see Doug Williams go. Many considered him greedy. I was not one of them. I supported him since the day he was selected as part of the Earl Campbell trade.

I still think he has the prettiest throwing motion of any QB. Effortless.

Yep Scubog and in retrospect we had a greedy owner, Williams should have been signed for he was only asking fair market value. Now some nearly 40 years later we still haven’t signed our first franchise QB. It’s like we never learn because I here the same chatter about not paying Winston and Smith fair market value when Winning teams would gladly write the check. Seattle is still laughing at us for not writing Michael Bennett the check. That’s reason I like this version our owners and this GM because they don’t listen to us fans they’re about Winning period… Read more »

Smith is not going anywhere….improve the O Line trade down get extra picks draft Taylor from Florida and Weiter from Wisconsin and since this draft is loaded with defense draft defense the rest of the way.

Offer him a one year prove it Contract at Guard pay and give him a year to compete at OG. If he really wants to stay and help this team that should allow him to do it. Under no circumstances let him play LT next year. He had four years to prove he can play LT and he blew it. Played worse last year than his first year!

Or they will offer him a 5 year prove it contract where the first 3 years are guaranteed. Lol.

We’ll see which one is more likely owlykat.

Licht needs to get Iupati in Free Agency so Marpet can move to RG and Iupati can play LG. Then the running game will go again and Jameis can step up. In UDFA or the bottom of the draft get a FB/TE like Cross who can be the third down back to protect Jameis from blitzes or be the outlet pass receiver. He can also block on third down.

Iupati is old and broken. Who cares if the guy worked with BA before? There will be plenty of young guys that will be working with BA this year. #NoGeezers

Iupati has struggled in the passing game, he’s an ok run blocker but we need someone who can also keep Winston protected.

Smith will not take anything less than what a LT makes…people need to stop thinking that he will just take a guards/RT pay and call it a day.

Smith is a likable person. But he is actually to big and to over weight to move effectively against rushers at LT or RT. He has shown either too many penalties trying to keep up or he has just missed the rusher all to gather. He does not show any real toughness in the run game. He does not deserve big time LT money. Yet we have too many holes to fill. So franchise him for one year. Then cut him next year, and he can see what the market is willing to pay him. Use one of the top… Read more »

I have never been a detractor of Smith’s, in fact he has been one of the rare No.2 draft picks Licht has had that has experienced any sort of success. But I really expected him to put his game together last year and have a much better season and instead he seemed to regress a bit. Now I am beginning to wonder if Smith is one of those players we have on our team who is just happy being a millionaire and is really playing for very little else. If Smith loves Winston so much, he should quit taking plays… Read more »

Franchise Smith, Move down from #5 and get more picks along with that one or two offensive linemen. Maybe with good coaching, Smith will end up as a premier left tackle. He can do better, but so can the Bucs. Trade Down! We need plenty of quality players.

He would be all pro as a guard. Davin Joseph probably could’t have played T, much less LT.

I’m bemused to see people calling Smith a success in an article debating whether to cut him. Another Bust Licht selection which over five years if futiliry has left us with more holes in the dam than we have fingers to plug them with. It’s why this is a 2-3 year turnaround whether we like it or not.