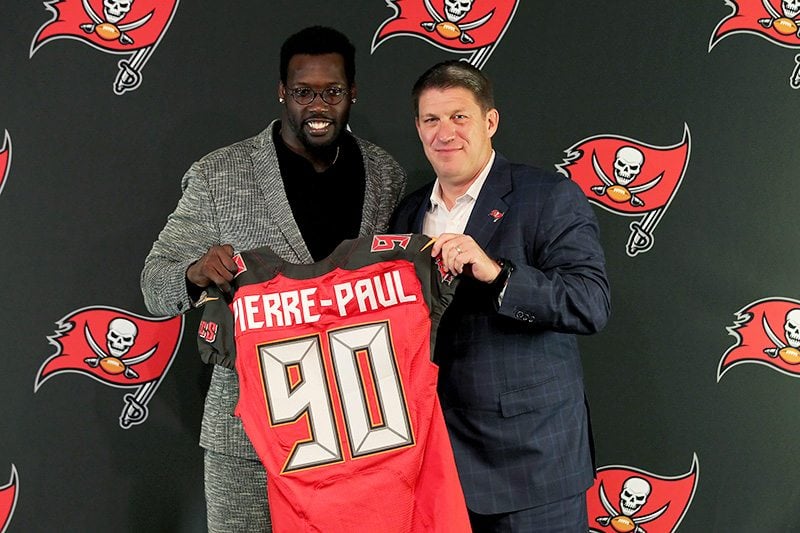 All things considered, I think most would say the Bucs had a successful OTA month. The veteran players got to be back out on the field running organized drills with the coaches, free agent players were able to start getting their feet with their new teammates, and the incoming rookies were able to get their first taste of NFL practices.

However, there were some less-than-ideal variables that did occurred during the OTA period, the main one being the absence of three of the team’s top players, defensive end Jason Pierre-Paul, cornerback Brent Grimes and ,at the latter half of the month, wide receiver DeSean Jackson.

All three of these players are considered not only veterans but talented veterans. Their absence wasn’t harped on, but it was noticed, as they will all be starters. Jackson was able to show face at the first few OTA practices, and Grimes was at a handful himself in between. But, as for Jason Pierre-Paul, he was not in attendance at any. Because of this, there has been speculation as to whether or not he would be skipping any of the mandatory mini-camp practices, too, which start this week.

PewterReport.com has learned that Jason Pierre-Paul will attend the Bucs’ mandatory mini-camp, along with every other player on the roster.

That’s a good sign, even if there are some fans who would have rather him be there from the start.

The entire roster in attendance means that, as of Tuesday, all courses will be set straight ahead with no unnecessary distractions.

Good sign? He is under contract, it’s one thing walking away from a bonus, it’s another paying fines out of your pocket.

Yea…I agree. As a fan of the team, would’ve love to see him at OTAs.

OTA’s are not mandatory. What part of that don’t people understand? JPP will be there when he needs to be there. JUDGE YET NOT..unless you know all of the facts. When a lot of these half-stepping Buc players see JPP bring it on the field, they are gonna forget all about some OTA’s.

Of course JPP is here. It’s mandatory. And it’s not about the money, it’s about the message. JPP just passed on 250K by not attending voluntary OTAs. Players that skip mandatory minicamp has a beef and is sending a message to management. Not the case here. Many established veterans skip voluntary OTAs because they have a regimen that’s been effective over the years and they follow it. I understand some consternation with the Buc fans – we’ve not been winning and we feel like we need all the training we can get. Tom Brady and Gronk never attend voluntary OTAs… Read more »

Are Tom Brady and Gronk walking away from workout bonuses in their contact to skip OTA’s macabee?

It would seem sort of weird to have an agent put that in your contract only to skip it. Not sure I’d want that agent if I know I’m going to “voluntarily” walk away from 250k guaranteed to me.

I don’t know. Do some research on your own. Here’s something else to read. I think of you when i post these links. lol.

What do you expect them to say to the media?

I’m sure you’ve read enough sports articles in your life to know that 95% of what is quoted to the media is going to meaningless drivel. On the ultra rare instance where someone is actually called out like Landon Collins did to Eli Apple it breaks the internet and the person that does so ends up apologizing.

Well, la-dee-freakin-da, look who decided to show up!

I suspect that when a player has been a starter for one team at least four or five years, they grow some roots in the community in which they live. If that person truly does not see the trade for them coming they may have a bit of a shock to overcome. If they have normal family circumstances (whether married or not), community commitments and business ties they certainly have to deal with them. Perhaps, they have to scramble to get with their agents and other legal associates and get the situation under control. They usually fly almost immediately to… Read more »

Xpfc, JPP was out buying tile for his new home when he got the call that he had been traded. Had to be a little shocked if not dismayed. Coming home should help over time. Weather, money, no income tax should help to normalize things I would hope.

Thanks for that information mac.

I have noted that JPP was with the Giants for the past 8 years. This supports my thought about the points I tried to make.

Gmac has also been with the Bucs for the past 8 years. I would imagine he would have gone through a similar shock if they had suddenly traded him to another team in February or March. (I am sure some of his detractors would have loved for that to have happened in spite of his 6 pro bowls.)
________
Go Bucs!!!!

This is a positive thing, to those who seem confused. I am happy to have JPP here and looking forward to a good season.

Mighty nice of him to take precious time out of his busy schedule to do his job.

Anyone ever move? If so, I’m sure everyone can imagine the “family” responsibilities. JPP simply made a choice to skip the “voluntary” OTA’s to relocate.

Why people make such a big issue out of it every off season is beyond me. I’m sure if a person were allowed a 30 day time off following an operation they’d take the entire 30 days even if they were fine and able to go back to work in a week.

Since hand injury, his solo tackles drop to less than half and has recorded fewer sacks in last three years as he had in one season before the injury, And Bucs guarantee him a boatload of money and the first thing he does is miss OTA, And I read comments defending him. Like I said, Giants management laughing their ass off at Jason Licht.

I look forward to reading your even growing negative posts mike seven. Honestly, do you ever have anything good to say about this team? If they make you that miserable, why the hell are you even a fan? Go like the patriots, I’m sure they’ll make you happy time and time again. And I’m sure you know exactly what the giants front office thinks. Your the best couch GM I’ve ever heard from. Keep up with the great insider info bud

Guy had the second most snaps last year so whatever work ethic he wants to use is fine by me. I just would’ve liked him to be there because he’s coming to a new team, with a new Dline coach, and a revamped Dline that he is going to be a big part of the puzzle for. Could’ve skipped OTAs after he got chewed out by Buck for the first time, now he’s not gonna expect it and it’s gonna be mandatory when he pisses his pants.

Mike.Seven we get it you don’t like the signing. Beat a dead horse much? What would you have done different to make this team and defense better rhis year coming off worst season of sacks ever? Who would you have signed that’s better? Or do you just say it’s stupid and offer no better idea? I’m sure your smarter than the dozens of coaches, scouts,financial personnel etc that made this happen? You think maybe the Giants going to a 3-4 defense might had something to do with moving on from him? Do you even understand what a 3-4 is and… Read more »

That is fair Fredster, I will make a note to check in after next year and if JPP has done well I will need to eat egg

I would have done everything possible to trade down and got Braddly Chubb , I sure you think that bad idea.

P.S. Injuries do not make excuse for you he is at 29 and I see him injury prone.