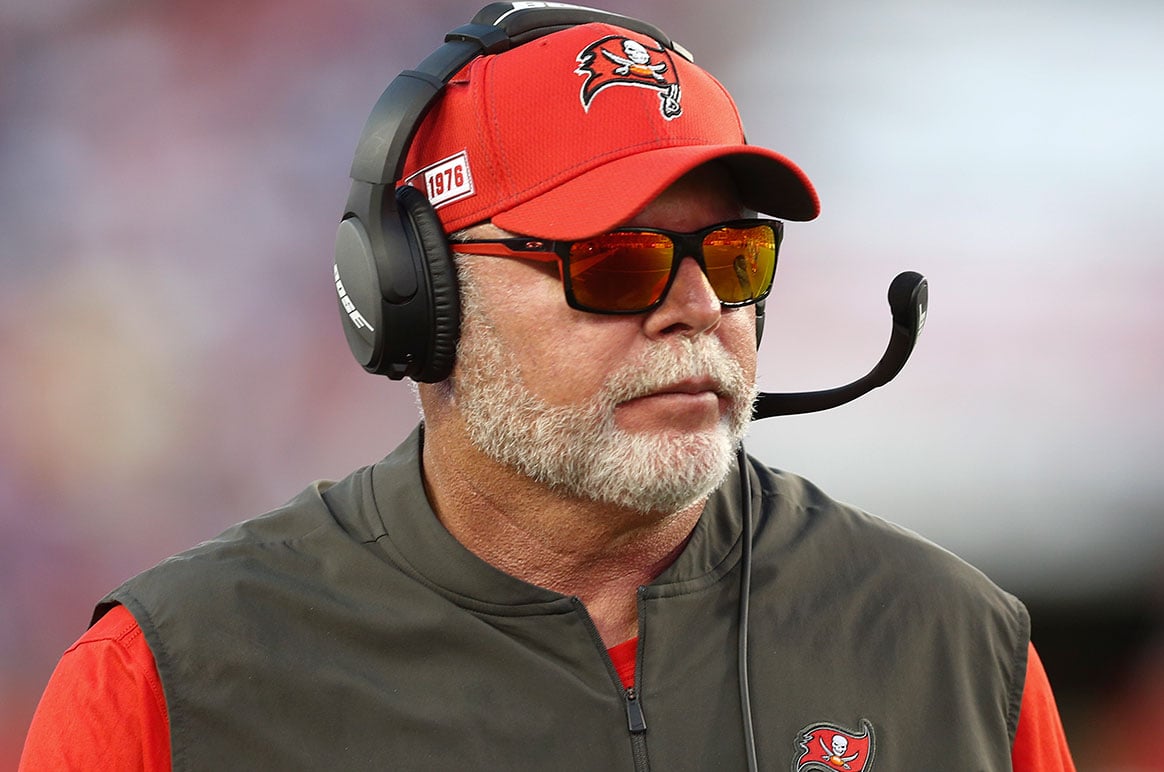 Attending NFL offseason events like the East-West Shrine Bowl, the Senior Bowl and the NFL Annual Meeting (otherwise known as the NFL Owners Meeting) not only provides media outlets like PewterReport.com the opportunity to conduct interviews – not only with Bucs personnel, but also with national media members – and get scoop from our sources from around the league.

Among some of the Bucs’ related buzz at the East-West Shrine Bowl in St. Petersburg, Fla. was the rumor that the NFL could kickoff the 2020 football season by having the Bucs play the Raiders in Las Vegas on Monday Night Football. The NFL schedule will not be officially released until mid-April right before the 2020 NFL Draft, so nothing is set in stone.

But the speculation does make some sense.

The Raiders will be making the move from Oakland to a brand new stadium in Las Vegas in 2020, and the league will surely want to showcase the new crown jewel in the desert before a nationally televised audience. With the defending Super Bowl champions typically kicking off the season by hosting the initial Thursday Night Football game, the NFL also has a Monday Night Football double-header on the first week of the season with the first game usually featuring an East Coast host team, starting at 7:10 p.m. ET, and the second game, which features a West Coast host team, kicking off at 10:20 p.m. ET.

The Bucs didn’t have a Monday Night Football game last year, and lost to the Pittsburgh Steelers, 30-27, in their last appearance, which was in Week 3 of the 2018 campaign.

Oakland appeared on Monday Night Football twice in 2018, including Gruden’s return to football in Oakland in a season-opening loss to the Los Angeles Rams in the second game of the double-header. Last year, the Raiders also opened the season on Monday Night Football with a win against Denver as the second game of the double-header.

The Raiders could make it three years in a row on Monday Night Football’s season-opener by virtue of their new stadium, and a Gruden rematch against his old team, the Buccaneers, and Bruce Arians’ high-powered offense might be too tempting for the NFL to pass up. Other teams that Las Vegas will host in 2020 are Buffalo, Miami, New Orleans and Indianapolis, along with AFC West division rivals Kansas City, Denver and the L.A. Chargers.

We’ll find out in a couple of months if the speculation becomes fact and the Bucs indeed hit the road and travel to Sin City to start 2020 against the Raiders and the coach that has the most wins in Tampa Bay history and helped the organization win Super Bowl XXXVII, or if the NFL goes in a different direction with its Monday Night Football season opener.

I wouldn’t be happy waiting till 1030 PM on a Monday night to watch my Bucs open the season. Let two West Coast teams battle, at least their fans will be able to stay up, and watch.

MNF is a nice plug for the team, but after the horrendous schedule from 2019, how about the Bucs get a decent schedule this season. West coast game running after midnight makes for an even shorter week for game 2, especially when you add the travel. NFL treats the Bucs like a doormat.

I really hope not. We’re owed much better in the scheduling department after the BS of the past few years, and having an early short week would just be more of the same. Plus it would likely make tickets ridiculously expensive for those of us who want to travel for the game and wouldn’t have another shot for 8 years.

The Raiders’ first home opponent in Vegas should be a divisional game.

I made this prediction a month ago that the Bucs would open the new Vegas stadium against Gruden.

Here’s the link as I pound my chest!

This would be awesome for Bucs fans and the NFL. Opening against a division opponent like the Chargers isn’t nearly as sexy. They will play those teams year in/year out. Gruden won a superbowl with the Bucs against the team he built in Oakland. It could also be the Sunday Night Game.

Also, to all the potential travelers, the best weekend to hit Vegas is opening weekend of the NFL.
IT IS AMAZING! If the Bucs open there, I’m ALL IN!

Hope this turns out to be true and GO BUCS!!

If this happens, I will be there!

As a proud Raiders season ticket holder (I bought them to sell them), this would be a dream come true. Actually use my tickets on opening weekend at the brand new stadium to see my favorite team in the world play live? Sign me up. I get it though, from a team perspective it should be another west coast team ideally or a team like the Broncos who are on mountain time. Broncos suck though and the two played at Raiders on opening week MNF this year so they are probably off the list. Hard to think of a better… Read more »