Anyone who has interacted with Bucs defensive coordinator Todd Bowles knows of his incredibly laid back demeanor. He’s soft-spoken and unassuming, commanding a room without the loud bravado of other coaches. So when Bowles gets angry, the Bucs players know it. And on Sunday against the Falcons, he was not pleased with the defensive effort in the first half.

“Bowles wasn’t happy with our performance in the first half,” cornerback Carlton Davis said. “He had a halftime speech that really stuck to us, got us fired up. We always wanna carry out our jobs for him. He’s just such a good coach, and he’s passionate about it. We know the standard and we have to keep up the standard at that point. We knew we needed this win, a division win. So we had to come out and shut ’em out.”

The Bucs uncharacteristically allowed the Falcons to rush for 102 first half yards, including 99 on called run plays. 63 of those yards came on the game’s opening drive, with Atlanta gaining seven, 39 and 17 yards on consecutive carries. The Falcons scored ten points on offense, moving the ball with ease on most drives. Tampa Bay did make a critical goal line stand, however, and notched three first-half sacks of Matt Ryan. But outside of a couple plays, the Bucs were outplayed by Atlanta’s offense in the first 30 minutes. 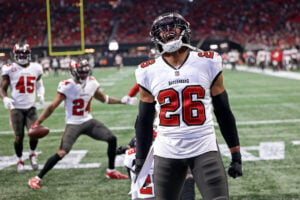 “Actually, I was getting an IV,” Davis said of the halftime speech, laughing. “All I heard was him yelling about the game, about the runs. And I knew what time it was. I was like, ‘he’s pissed off, just leave him alone, just go play’. So I didn’t get too close to him after that.”

In the second half, the Bucs run defense returned to form. On 10 Falcons carries, Bowles’ unit surrendered just 20 yards. That effort helped shut out the Falcons, turning away several potential scoring drives inside Bucs territory. The Bucs finished with five sacks of Ryan, tying a season-high mark.

Tampa Bay returns to action on Sunday against the visiting Buffalo Bills.

Announcer on the game attributed the Falcons successful running game to BA’s remarks about no one being able to run on the Bucs.
I guess that bulletin board inspiration is only good for about 15 minutes because after that the Bucs started to shut down the Falcons offense. Still there were to many third and long conversions made and those you could attribute to not enough pressure being put on the QB, not sloppy CB play so all you morons quit chirping about the Bucs drafting a CB with a No. 1 pick.

Would love to see footage of Bowles being fiery and angry! Just can’t picture it…

The Bowles speech may have helped, particularly on Atlanta’s first drive of the second half that fizzled. What also helped was the Bucs offense scoring rather easily using the passing game for the most part. Which always causes offenses to panic is when they’re playing from behind in the second half … at which point they give up on the run and pass, pass, pass, making it easier for the defense to focus on the pass and getting after the quarterback, and getting turnovers. That has been the story of most of our wins this year, playing with a lead… Read more »

Now for the whining fans; got anything else to say bad about Bowles?

You’re right about that Horse. Dealing with all of the injuries to the secondary and inserting guys off the street has been a real challenge. It would be like me entering my cousin Cynthia in a beauty pageant.