The Bucs got some good injury news on Monday, as it seems cornerback Sean Murphy-Bunting is fine. Tampa Bay also might get cornerback Jamel Dean through concussion protocol in time to play against the Bills in Week 14.

As the Bucs secondary rounds back into form, more good news has arrived. On Monday, PewterReport.com has learned that the team does not plan to put safety Jordan Whitehead on injured reserve with a calf injury at this time.

Whitehead was injured in practice last week, going down on Thursday with a calf injury. Head coach Bruce Arians ruled the safety out for Week 13 on Friday, calling the injury “very” significant. Arians said the team wouldn’t know how significant until Whitehead’s MRI on Saturday.

“His MRI can’t happen until his swelling goes down,” Arians said on Friday. “We’ll probably get it sometime tomorrow and then we’ll know more.” 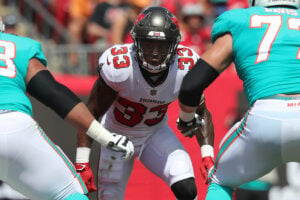 It appears that Whitehead’s MRI was clean enough that he’ll avoid being placed on IR right now, which would mean he would be out a minimum of at least three games. That’s significant news for the Bucs, as Whitehead has been one of their most consistent performers. The initial hope is that he could return to action as early as the Saints game in two weeks depending on how rehab goes.

With the team a man short at safety due to the suspension of Mike Edwards, Whitehead’s presence is needed. In 10 games this season, the Bucs strong safety has 49 tackles, four tackles-for-loss, four pass breakups, a forced fumble and an interception.

Veteran Andrew Adams replaced Whitehead on Sunday in Atlanta, while Ross Cockrell also saw some reps at safety. It’s unlikely that Whitehead can play against the Bills on Sunday. The hard-hitting defensive back has missed just five games in four seasons in Tampa Bay.

If Whitehead can’t play in Week 14, expect Adams and Cockrell to combine as fill-ins once again. Arians also said that 33-year old Richard Sherman will likely cross-train some at safety in his upcoming return from injured reserve.

Lot times guys lose a step and aren’t good at CB anymore, but can still play high level as a safety. That’s good idea since he has lot knowledge etc. if he can play still. I Assume he can if Bucs took him they must have watched him practice etc.

Breaking news this does not have – the Bucs today at practice are trying the now healthy Richard Sherman at safety as the Bucs have an injured Whitehead in addition to Mike Edwards being out due to COVID-19 lies. If Sherman can do it it will help them a lot this week against Buffalo. If not they will be a little thin at that position now instead of CB like it has been all year.