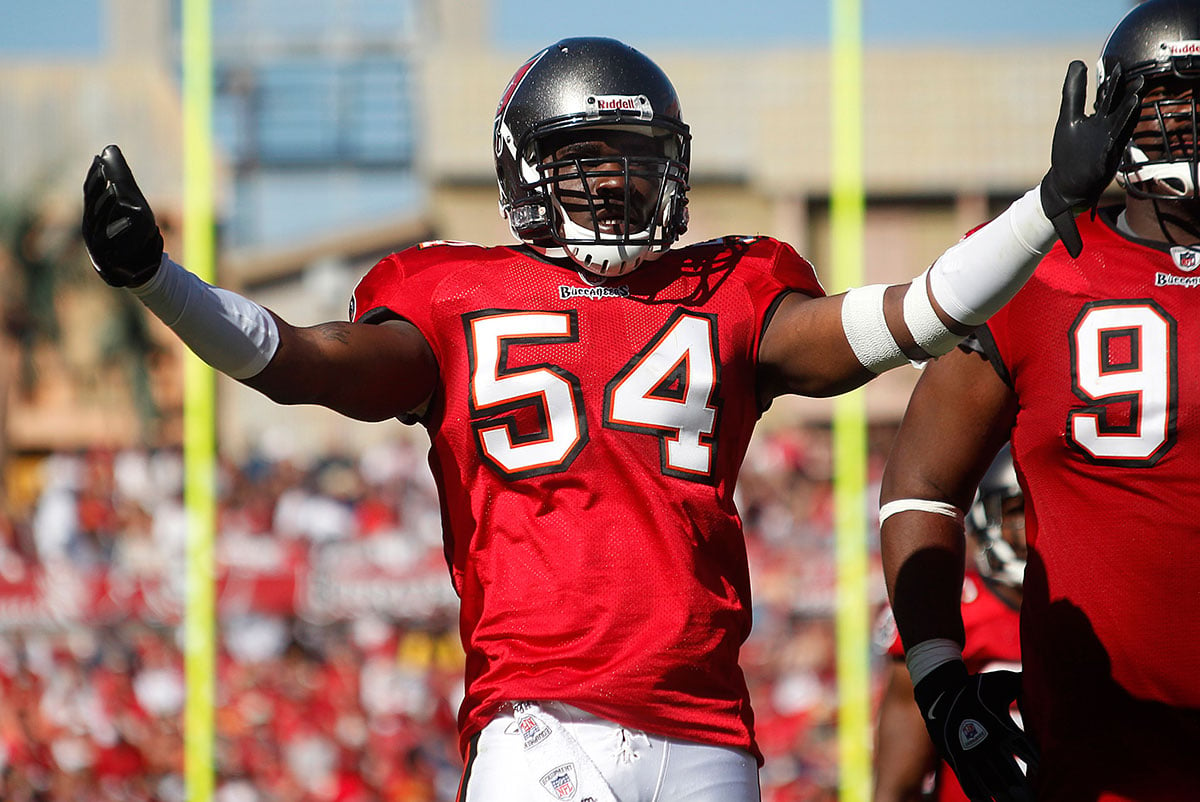 Hayes told ESPN Bucs beat reporter Jenna Laine last week that he had been hospitalized over 20 times due to liver disease and was on the waiting list for a transplant.

“The first diagnosis they gave me was alcoholic cirrhosis,” Hayes told ESPN. “But when we dug in deeper, it became just chronic liver disease, because I don’t drink like that. If I did drink, it was just like wine or something like that. But my body is made different. And that’s what [my doctor] said — ‘Everybody’s made different.'” Hayes said ESPN he suspected the use of nonprescription pain medications (NSAIDs) is what brought on his condition. His family also had a history of liver disease. Hayes revealed that he did not take pain killers prescribed by the team and instead  took over-the-counter pain medications during his playing days but never more than the recommendations on the bottle.

The Seminoles star wore No. 10 in college to honor his idol, Bucs legend Derrick Brooks, who wore that number at FSU. Hayes recorded 139 tackles as a two-year starter at Florida State, including 29.5 tackles for loss, eight sacks and a pick-six.

The Bucs drafted Hayes in the sixth round in 2008. He played in 56 games in four years with 42 starts at weakside linebacker.

Hayes recorded 257 tackles, 36 tackles for loss, 15 pass breakups, seven sacks, four forced fumbles, four interceptions, including a pick-six, and a fumble recovery in Tampa Bay. He would sign with Chicago for the 2012 season before ending his NFL career with a two-year stint in Jacksonville.

He played in 56 games in four years with 42 starts at weakside linebacker. Hayes played seven seasons in the NFL, retiring at the age of 28. He recorded 401 tackles, 48 tackles for loss, 10 sacks, six interceptions, six forced fumbles, one fumble recovery and one defensive touchdown during his NFL career.

Hayes leaves behind his wife, a 12-year old son and an eight-year daughter.

RIP Geno- from a Nole to a forever Buc- sending prayers your way and to your family.

What a shame, to die so young and leave a grieving family. Rest in Peace, Geno, you left us too soon. Thanks for your efforts for the team, you had it hard replacing Derrick Brooks and did a great job.

Tragically sad story. Condolences to his family and friends.

My sympathy goes out to his family for their loss.

When Geno Hayes was drafted he exceeded expectations. Always grinding hard and I loved watching him play. Gone way too soon.

RIP Geno-you always were ready to play and brought your A game!

I hope the best for his family. I think his family having a history of liver illnesses far outweighs the merits of an over the counter pain medication causing his liver problems unless he was gobbling down aspirin by the bottle every day.

On the field, I thought he was one of the most underrated LB’s we’ve ever had. If not, the most underrated we ever had. His stats his first 2 years as a starter, on a per game basis, were up there with the best. And that’s without much help around him, a crappy scheme, and crappy coordinator. Put him on this current Bucs team, and he’d shine like Lavonte and Devin do

Off the field, what a shame. 33 is just heartbreaking. 2 young kids and a wife. My heart truly goes to his family. RIP #54

Very sad to hear, this man had such a wonderful heart. I am of course grateful for the Buccaneer memories he’s brought us Buc fans, but today my thoughts and prayers are with his wife, son and daughter. Many prayers to those young ones that they are surrounded and supported with much love from others in their family circle.

Way too young to pass. Rest in peace.

Deeply saddened, whenever a Bucs player passes, and so young?