How The Bucs Defense Can Finally Defeat The Rams

Home » Articles » How The Bucs Defense Can Finally Defeat The Rams 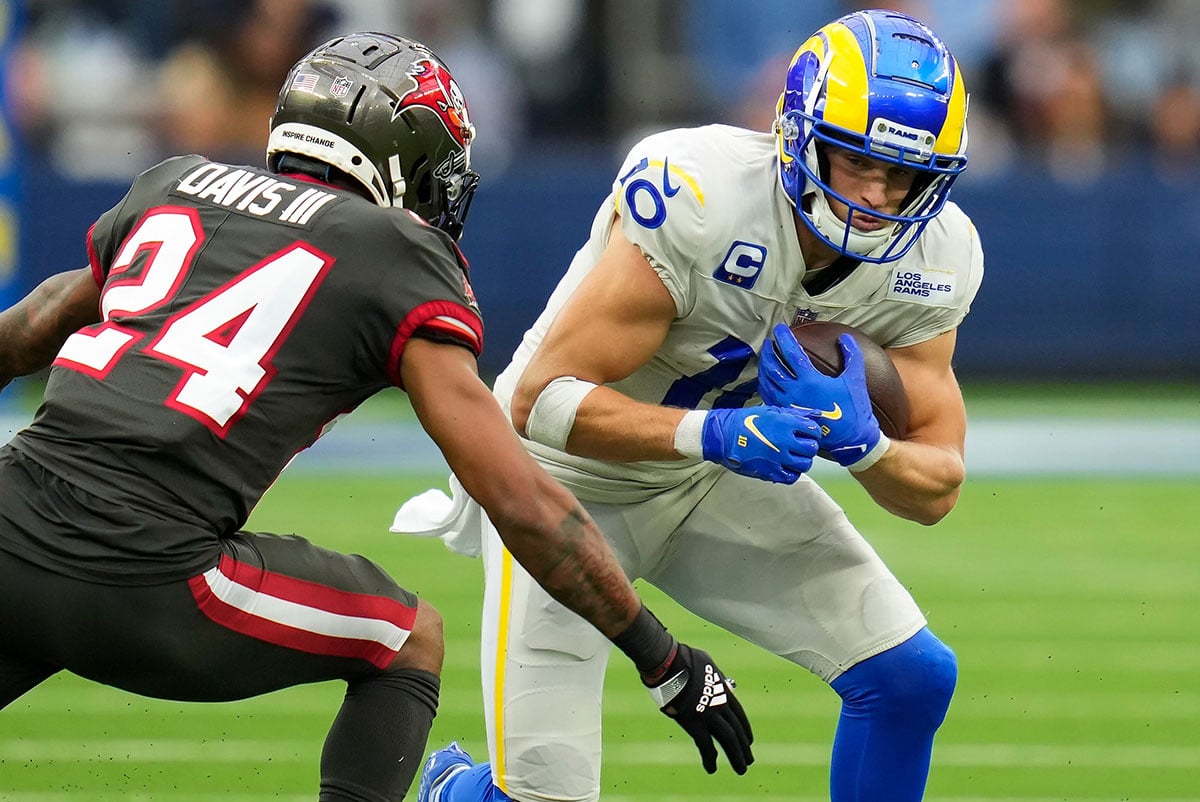 How The Bucs Defense Can Finally Defeat The Rams

Home » Articles » How The Bucs Defense Can Finally Defeat The Rams

The Rams could’ve put up 40+ if they executed better to start the game. Their opening drive ended on a short, missed pass intended for a wide open Van Jefferson with the pocket collapsing. However, not all mistakes were induced by the Bucs’ pressure.

Play fake moves David, who’s playing down the pipe in Tampa 2, and creates space for Kupp on middle read.

Even though they scored 34 points and won, the Rams left plenty of chips on the table. pic.twitter.com/nXTXbHJQBp

Todd Bowles called Tampa 2 on a first-and-10 during Los Angeles’ second offensive possession. Sean McVay dialed up a middle read variation, similar to the Bucs’ staple Go concept, off of split zone action. Lavonte David — the pipe player in Tampa 2 — was displaced by the fake. This created space for Cooper Kupp over the middle, but the ball went a bit over his head and through his hands.

Stafford missed again on third-and-10 on the same drive. With the Rams in a 3×1 set, the Bucs went to Stubbie. Stubbie is a match quarters coverage that creates a triangle over the No. 2 and No. 3 receivers.

McVay countered perfectly. Unlike Stubbie’s sister coverage Stump, the trips side cornerback cannot abandon the No. 1 receiver on a short underneath route. Instead, he’s locked in man coverage. Thus, David — who was correctly playing with inside leverage — had no support outside against Kupp’s sail route, as Jamel Dean followed his receiver underneath instead of dropping into a deep zone. But that’s not even where the ball went! With Mike Edwards eyeing Kupp, the No. 3, through his cut, Ross Cockrell was left one-on-one against Desean Jackson’s post route, which cut after Kupp’s route, with outside leverage.

Stafford’s underthrown pass bailed out the defense. The drive that should have ended with seven points ended with a punt.

Stafford missed another explosive opportunity to Jackson. Yes, he was hit immediately after the throw, but the Rams expect Stafford to hit this.

According to Sports Info Solutions, the Bucs’ defense played variations of Cover 1 on six of the Rams’ dropbacks. Stafford went 4-5 for 75 yards, one touchdown, and one sack. While I think the Bucs could’ve actually had success with Cover 1, which we’ll get to in a moment, this was another missed opportunity by Stafford.

Los Angeles picked up the blitz well, but Stafford still leaned back instead of confidently stepping into his throw, thus sailing the ball over a wide open Kupp.

As mentioned, the Bucs’ numbers playing Cover 1 weren’t pretty. But it’s not because Tampa Bay couldn’t cover, it’s because they couldn’t get out of their own way.

The Bucs were playing Cover 1 and sending five again. And as is often the case, Devin White added on as an extra pass rusher when his assignment, the running back, stayed in to pass protect. The Bucs’ coverage was excellent. However, this play was undone because David was offside pre-snap.

The defense showed man coverage across the board, and their three cornerbacks on the trips side were aligned on the same level instead of being staggered. Stafford saw this and signaled his receivers into a post-slant-wheel combination that created a natural rub for Kupp. Delaney maneuvered through traffic well, but the route concept created enough space for Stafford to throw a downfield dime.

Tampa Bay made the same error on the very next play! It’s difficult to stagger much this close to the end zone, but it was still too easy for the Rams to create a pick out of their bunch formation. Defenses often solve this issue with banjo coverages.

The Bucs were playing 1 Lurk on third-and-5. In this variation of Cover 1, the defense starts in a two-high alignment before a safety comes down to play the robber position in the middle of the field. Tampa Bay actually covered well, but White carelessly picked Carlton Davis and let Jackson come open for a first down.

I believe the Buccaneers can handle the Rams in man coverage. But they can’t get in their own way, literally and figuratively. Further, when they do play Cover 1, I would prefer to see more 1 Lurk, 1 Cross, or 1 Hole so that they have more support over the middle of the field. Jon Ledyard detailed this further in Bucs Briefing. Blitzing the Rams is not the answer.

Per SIS, Stafford leads the NFL in ANY/A against the blitz, and no one blitzes more than Bowles.

Cover 2 man under, or 2-man, should also be a bigger part of the game plan this time around.

Deep safety help let Davis play a trail technique against Kupp. And despite looping inside, Joe Tryon-Shoyinka got all the way outside once Stafford threatened to scramble. The Buccaneers had success with 2-man against the Eagles, but they were cautious with its usage because of Jalen Hurts’ abilities as a runner. Stafford won’t beat the Bucs with his legs, and they can contain him without a spy.

The Bucs, again, covered perfectly with 2-man. I also like how Edwards was eyeing Kupp all the way from the opposite side, and it almost made the coverage look like 1 Cross.

When playing 2-man against dropbacks in Week 3, Stafford went 2-6 for nine yards. The Rams have been in the middle of the pack in terms of efficiency when facing 2-man for the whole season. Stafford’s season-long stats against 2-man reflect that, as he has only gone 17-32 for 243 yards, one touchdown, two interceptions, and four sacks.

There’s no clear blueprint to stop McVay and Stafford. But self-inflicted mistakes are the sure-fire way to lose. The Bucs can’t depend on Stafford missing, and they must clean up their own errors if they are to win.

Very Simple here- use different schemes up front to create confusion in regards to blocking assignments (I’m sure Bowles will have a plan for this.) Just like I’ve heard all week about the Rams putting pressure on Brady- it’s the same for Stafford- all week I’ve heard about how the Bucs are screwed because of our O line injuries but it looks like both Jensen and Wirfs might play. What no one is talking about is the Rams already ruled out Whittworth who is probably there best and experienced O linemen- I think this bodes well for our speed on… Read more »

Hey MWD! I’m sure the Rams have some apprehension about our D as well! After all, we r the defending SuperBowl Champions! Anytime u have Brady under center u have a chance! 7s instead of 3s all day long!

More 2-man! Excellent analysis–but is Todd paying attention?
Is there any doubt Brady’s shot about this is no week for movies was aimed at Todd and Byron watching Vikings’ film all week to prepare for interviews yesterday and today?
Must be driving him nuts.

Don’t all NFL coordinators base their game plans on fan web site articles and comments?

Say Paul, You picked us ro lose on Sunday. But I can see why, I do hope you are dead wrong. And I get the feeling you hope so too. I’ve said this a thousand times. The only way we win is our Defense steps up real Bigtime like it did against the Chiefs in last years SB. Our D has gotta play like that ole Lawrence Taylor sayin…MAD DOGS. Yes I know Our fans say we got Bardy. But the Rams Defense will be ready. They are all of that and formidable. We gotta negate this in some way.… Read more »

Collinsworth in one of the broadcasters for this game, he has been against the Buc for each of our game he called.

I would expect Stafford to make just as many if not more mistakes. Watching them against The Cardinals, there were bad throws and dropped passes. I have a feeling our Offense will plan well for the soft spots in the secondary and middle and our Defense will stifle Kupp a lot better. Back in week 3 Kupp wasn’t figured to have the season he did. Bowles will eliminate him like Hill. I also have a feeling after the stat came out that Stafford was the best QB against pressure, like Mahomes was last year, that he will rush 4 like… Read more »