In Winston’s Words: Humphries “Shows Up Every Game”

Home » Articles » In Winston’s Words: Humphries “Shows Up Every Game” In Winston’s Words: Humphries “Shows Up Every Game”

Home » Articles » In Winston’s Words: Humphries “Shows Up Every Game”

Bucs quarterback Jameis Winston held his weekly press conference as he does each and every week and PewterReport.com provides a full transcript. Here is what Winston had to say on Thursday from One Buc Place.

(On what is challenging about Cardinals’ defense playing man)
“That’s the main part. They are going to play how they play. They’re going to man you up and try to pressure the quarterback.”

(On how getting Doug Martin back opens up offense)
“Doug is definitely a huge part of our team. That’s one of the things we focus on—dominating the running game and dominating the line of scrimmage. What he brings to the table is amazing. When he really gets going you see that our offense can open up all different types of ways.” (On mindset in hurry up offense and the fourth quarter)
“Just playing fast. I don’t really feel a difference, just getting a rhythm and playing fast.”

(On whether it is about him getting in a rhythm and not allowing the defense to substitute)
“Not really. It’s just about our team. It’s one of the advantages that we have—playing fast and executing.”

(On mindset going into Arizona after losing to them last year)
“Go in there and play our tails off. Go in there, compete, execute, and have a very clean game. Last year was unfortunate for us but at the beginning of that game we were in it. Turnovers kind of put us out of it. Heading to Arizona we have to go there and be ready to execute—be ready to play. We know we’re playing in someone else’s home field and we need to come with it.”

(On lessons learned from last year)
“I think just turning the ball over was the biggest part.”

(On how it came about him talking to Tom Brady in tunnel after game)
“(Bucs communication director) Nelson (Luis). Nelson set that up for me and I’m very thankful for him. It was a blessing and a privilege. It was cool, but that was all Nelson.”

(On if Brady sought him out before the game)
“No he did not.”

(On if he talked with Brady before the game)
“Yeah we did.”

(On if completed deep ball to Jackson is sign they are beginning to click)
“Yeah, again, you just have to get better. Every game is different. I have to continue to make those plays. I tell you, when you get him in a rhythm, it’s going to be special.”

(On managing targeting different receivers)
“You listen to the guy and just keep playing you. I’m the type of quarterback—I say all the time, I don’t discriminate—I’m going to get the open guy the ball. We really don’t have any problems like that. Obviously when you have targets like D-Jax (DeSean Jackson) and Mike (Evan)  they are always going to be a guy where you know, ‘Okay I got a chance with this guy getting open.’ When you have the other guys that have the same chance of getting open too, it makes my job dispersing the ball to everybody easier. Everyone has ultimate respect for each other. We have a lot of selfless players in the locker room so it makes it easy.”

(On chemistry with Adam Humphries) 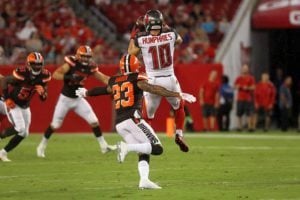 “He shows up every game. You watch a game, you’re going to see Adam Humphries show up and have a long run or break a tackle or have a fantastic catch. That’s just who he is—he’s a baller. He’s similar to Cam (Brate). They’re guys who just work hard as far as taking care of their body and getting extra reps after practice. They’re guys who are just true professionals. Adam Humphries, you just love having him as a teammate. The guy gets open. You can’t expect anything less.”

(On if being able to do more has changed the offense for him at all)
“Not at all. I just have to play better. When I start playing better everything is going to start looking better. When it starts looking better, we’re going to have W’s. The more W’s we have, the better off it is for everybody.”

(On adjusting between man and zone coverage)
“The key to those adjustments falls on me going through my progressions and taking what they give. That’s another thing I mean when I say I need to play better. They show their hand I just have to complete the football to someone.”

(On Cardinals secondary)
“The corners. It all starts with the rush. The have some good guys up front that get a good rush on you. Patrick Peterson is arguably one of the best corners in the league. Bethel is a great corner too but I think we match up well with those guys as far as matchups. Anyone in the league I believe we match up to pretty well. I look at it as, they are our competition this week. Yes, they’re good, but everyone in the NFL is good. It’s a week to week league. We just have to be better than them on Sunday.”

(On if there is extra incentive given the results last year)
“I’m not really worried about last year. I’m just focused on—we lost at home and we definitely want to bounce back. You never want to lose two games in a row no matter who they are to. We just have to head to Arizona with that in our mind—knowing what happened last year did happen and bring it. Bring it even more because they are going to be ready. They’re coming off a loss too, so they’re going to be prepared to play at home.”