Inside Bucs Camp 8/2 – Defense: DBs Lock Down On Thursday 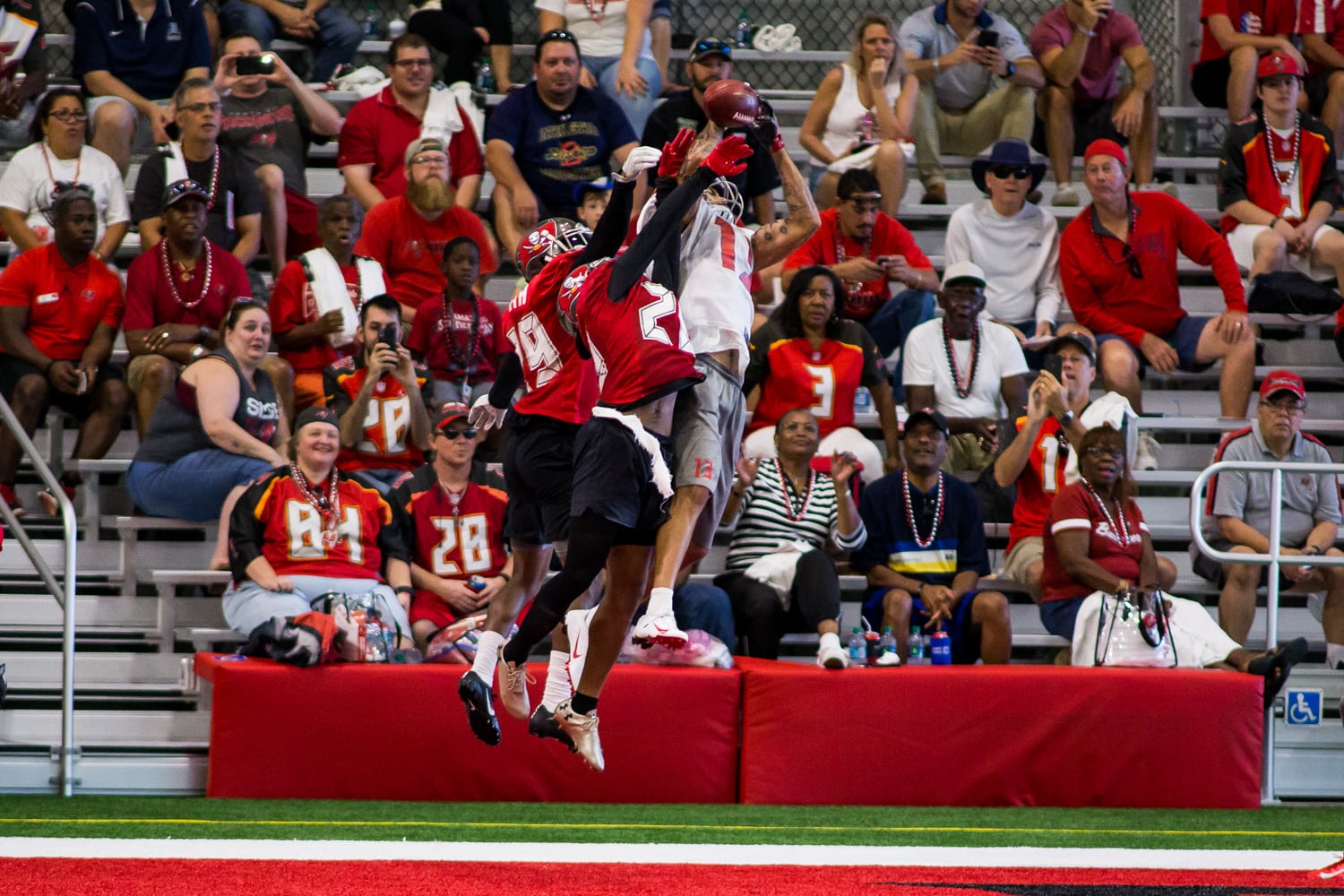 Inside Bucs Camp 8/2 – Defense: DBs Lock Down On Thursday

Thursday’s Bucs camp practice was labeled a “mock game” due to the team running in-game scenarios for the entire practice instead of sprinkling in some position drills.

There were some end-game situations that the team went through, like defense to the side lines during last-second plays and odd punt coverage calls just to make sure they were ready for anything, but there were plenty of crucial, more normal situations that the defense ran through against the first and second team offenses

For the most part, defense had the better day.

Vernon Hargreaves vs Mike Evans on the outside

When Bucs fans say Vernon Hargreaves’ name they often say it with some frustration in their voice due to how he’s struggled over the last two years trying to play outside corner in an off-coverage scheme.

However, starting this offseason, as early as the OTA practices, Hargreaves has been seen in more of a press coverage role, and he seems to be thriving in it. On Wednesday, he didn’t allow a single catch in practice, and on Thursday he was seen locking down wide receiver Mike Evans out of press technique.

The mock game — or mock scenarios — wasn’t too kind to the offense on Thursday, as there were more interceptions than there were touchdowns.

The first interception of the day came from safety Chris Conte. It was a slow-pace play, but that was the start of a bad trend for the offense. On the other hand, it fueled the confidence of the defense.

Video: Bucs practicing goal-line pass situations and Winston pass is picked off in back end zone by Keith Tandy. pic.twitter.com/fljbNI6nfg

Even the Tandy Man, Keith Tandy, got in on the action with a takeaway in the red zone drill, which was one of a handful of takeaways and stops the defense made from inside the 20-yard line.

It wasn’t just the first team players making their mark. There were plenty of second and third string defensive backs who were showing off in the indoor facility, too.

Video: Fitzpatrick looks for Mike Evans in back of end zone but defensive backs have it covered. pic.twitter.com/AFP0rPpQj3

Defense dominated the spacing during the red zone portion of practice. You like to see that, but on the other hand you remember that it’s your own team failing to find space on the offensive side, too.

The defensive backs were confident and suffocating on Thursday, and with that being the first practice with only in-game scenarios, it’s safe to say they’re one-up on the offense in camp when it comes to being Week 1 ready.

Terrible decision by FItz on the Conte interception

Am I the only one who sees that on that last clip, Fitz telegraphs where he is going the whole time? No look off or anything. That’s an easy pick waiting to happen.

Even on the Conte pick, if you slow it down like some of us HS coaches do while watching film on HUDL, Conte just reads the eyes/head of Fitz and because he does absolutely nothing to freeze anyone, he jumps the route and ends up with a pick.

That’s also how Conte gets himself in trouble in real games. Gets manipulated too easily by the QB.

Ken, don’t even get started on Conte……

All of you armchair Joe Gibb’s need to read Koetter’s Q and A to understand why all those picks were occurring.

drdneast……Koetter’s Q and A, I guess we should take those to the bank right? I mean after all, he’s an expert as the craft. Now, Joe Gibbs you mentioned, I’d listen to.

Winston being Winston… and don’t say “it’s a training camp practice”. You play how you practice.

Dude is a fucking bonehead. Super pissed about it, he’s going to set this franchise back another 5 years now.

One of things you folks looking to analyze and criticize what they hear or think they see at Training Camp, you have to remember, it’s not a game…………it’s practice. They are doing things that are designed to achieve certain goals of which we are often unaware. In the case here where the naysayers want to criticize the QB’s (especially Jameis) for those ineffective red zone plays, you at least should have understood what was the intent of the drill. You also need to realize the defense knows it is a last attempt pass play. That’s the point. No, I didn’t… Read more »