Koetter Says Winston Is Getting The “Most Reps In Camp” 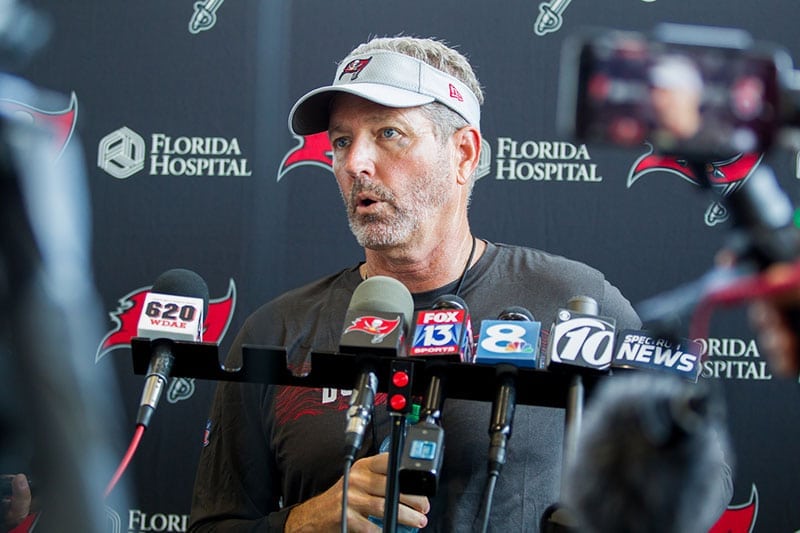 Koetter Says Winston Is Getting The “Most Reps In Camp”

(On balancing continuing to develop Jameis Winston and also getting Ryan Fitzpatrick reps)
“There’s no formula written down in the coaches handbook for that. So, were trying to get Jameis reps with all three groups, obviously we got to give Fitz work. Obviously one of the advantages with having a 27-year veteran quarterback is he doesn’t need quite as many reps, so we can still get Jameis some work with the first group and also he’s getting reps with the two’s and three’s. If you just counted them up everyday Jameis is still getting the most reps in camp everyday, barely, but also we can’t forget about Ryan Griffin. He also needs his reps because he’s one play away from being in there.”

Koetter on balancing Fitz and Winston: "If you counted them up, Jameis is still getting the most reps every day." pic.twitter.com/I5ca9ismCG

(On the overall talent and depth on the roster)
“I think we have good depth. Of course you got 91 guys on our roster right now so it’s not going to stay that way. Obviously we get to that point after practicing in pads for a few days where guys have to sit out for various reasons and then we’re going to get into some preseason games, and eventually we’re going to cut it down. So I think the depth is good right now, but you’re also still in that time of year where you’re projecting some guys, especially new guys that you haven’t seen, you’re projecting where they’re going to be, and that’s a tricky subject.”

(On if he feels in better shape with the 53-man roster)
“We should be, we should be. Again, we have to get through a whole bunch of stuff before we get there, so you just never know. All of a sudden Vita (Vea) gets taken off one day, and all of sudden Brent Grimes isn’t practicing, and Leonard Wester’s not practicing, so, again, Jason (Licht) and I try to get together. We try to project what it’s going to look like but at the same time we really don’t know yet.”

(On how the rookies in the secondary are doing working with the first team)
“They’re doing well, they’re doing well. I don’t know if you noticed but M.J. Stewart made a beautiful interception, not just that he caught the ball and made it, some interceptions the ball bounces right to the guy, I mean he broke on the ball, cut the receiver off, that was nice to see. And Carlton is giving those guys everything they want with his length, and it’s great for our receivers to go against a corner like that because it’s something that we really don’t have. It’s a work in progress though, those guys always have a coach back behind them whispering in their ear and slowly but surely they have to wean off that.”

(On what he’s seen from Alex Cappa and his confidence in him working with the one’s)
“Well this was his first day doing that. Really we’re just trying to create some competition with him and Caleb at right guard. The other thing is, you guys are out here everyday this time of year, and we’re rotating a lot of guys with different groups, so don’t read too much into that right now. A) Competition and B) guys are banged up and than C) some of our veteran guys get some reps cut based on the day. A combination of all that, but Alex, like the corners we just talked about is a guy that is smart and tough, he’s getting corrected on things by coach Warhop everyday and he deserves a chance to get in there and have a chance to compete a little bit when we feel like it.”

(On the how the defensive line is helping the progress of the offensive line)
“They are, they are. In all the one on one drills we have two different periods where its either one on one or two on one and there’s really no easy matchups. When you work your way down the line, there’s good matchup’s across the board, and that hasn’t always been the case. There’s been times when just as an example the left guard, maybe he’s not going up against as talented of a player and that first two groups of the d-line are some talented guys who have all started in games for teams in the NFL.

(On if he’s surprised about all the good plays M.J. Stewart has been making)
“I wouldn’t say surprised. I mean he’s a second round draft pick. I wouldn’t say surprised, that’s one of the reasons when Jason made that move to trade back, we still got Vita and kept those extra draft picks. And we needed a big corner and a versatile corner or nickel and we were able to get both so I wouldn’t say we were surprised. One thing you don’t know is how quick guys will adjust and pick it up, I’d say he’s’ a little ahead of the learning curve in that respect.”

(On if Ryan Fitzpatrick and DeSean Jackson are developing a chemistry since he looks for him a lot with the deep ball in practice)
“DeSean’s going to definitely be scripted in as the deep ball guy, that’s what he does. It’s not like he looks for him, but have they connected? Yes. On all pass plays the defense dictates where the ball goes. The quarterback doesn’t put the ball in his hand go “I’m going to throw it to DeSean this time” the defense dictates that. But they have connected fairly often and they had a couple today.”

(On Jack Cichy)
“Today’s actually the first day in pads that Jack’s come out and not work his knee brace. He missed all of last year, I don’t know if it’s an old wives’ tale or whatever it is that a guy usually takes two years to come back from a knee. I think with a lot of injured players, part of coming back into contact is just a full confidence. You got bodies on the ground and people flying at your feet, Jack definitely plays with a burst, he’s a smart players, I think he’s still adjusting back to life at full health.

(On the hard work of the players and a lot of them staying after practice to work on their skills)
“I just say the main thing there is, when we talked about Jameis the first day I think our leadership is emerging through the ranks of our team. Since I’ve been here, even before I was a head coach we’ve been mostly a really young team and those guys that Jason drafted in that first draft. The four guys, the four starters that he got in that, those guys are starting now, they’re not the young guys anymore, they’re the vets. I think as you get more veteran leadership on your team or you bring in guys from other teams that have seen that work that’s going to increase and it is great to see because none of these guys are required to stay out. You know, Peyton (Barber) is out there pass blocking right now, the receivers that don’t normally get reps with Jameis of course they’re dying to stay out here and get extra reps. I think it doesn’t hurt that a lot of guys have got to see the success Cam (Brate) has had as a guy who has stayed after and developed a chemistry with Jameis.”

(On how Ryan Jensen and Ali Marpet are working together from a physical standpoint)
“You know, it’s a work in progress I would say. It’s not where it’s need to be yet, but that’s just how training camp is, you’re still working out combinations and getting used to each other. You know Ali goes from a guy that was making the calls a year ago to now is helping Ryan adjust, because Ali knows the verbiage of our system better than Ryan does right now, so I’d say a work in progress is the best way to describe it.”

(On the set up for the mock game tomorrow)
“Don’t read too much into that term “mock game”. We are going to be indoors, this is the only week of practice that we practice five straight days. We’re looking for something to break up the padded days. Two full padded days, tomorrow we’re going to be like a Friday practice in the season,We’re just going to have spider pads on, and we said how can we give these guys a little break on their legs and still get something out of it since we have a preseason game coming up next week. It’s going to be a lot of situational work with all the players on the sideline, going through a lot of special teams, a lot of special plays that are designed for certain situations. There’s going to be some non-scripted periods where the coaches have to get used to calling it and subbing it and like I said, the plays to end the game, last play of the half, taking a safety. A lot of plays that we usually go through at night during the walk through, but we’ll be doing them at a little faster tempo.”

(On how O.J. Howard has looked)
“Yeah he was fantastic today. IF you watch him close, he had about five out of sight plays. I think O.J. is far, far ahead of any point that he was at last year. He’s really off to a fast start, it’s really good.”

So Fitz is a 27 year vet? Wow, didn’t know he is older than Tom Brady.

The attack of the typo.

Jamies is going to start over 81% of the regular season games this year so it makes since he would get as much if not more reps in camp as Fitz.

I thought he said Winston would have to earn his job back.