Is Bucs OC Leftwich No Longer An Option For Jaguars?

Home » Articles » Is Bucs OC Leftwich No Longer An Option For Jaguars? 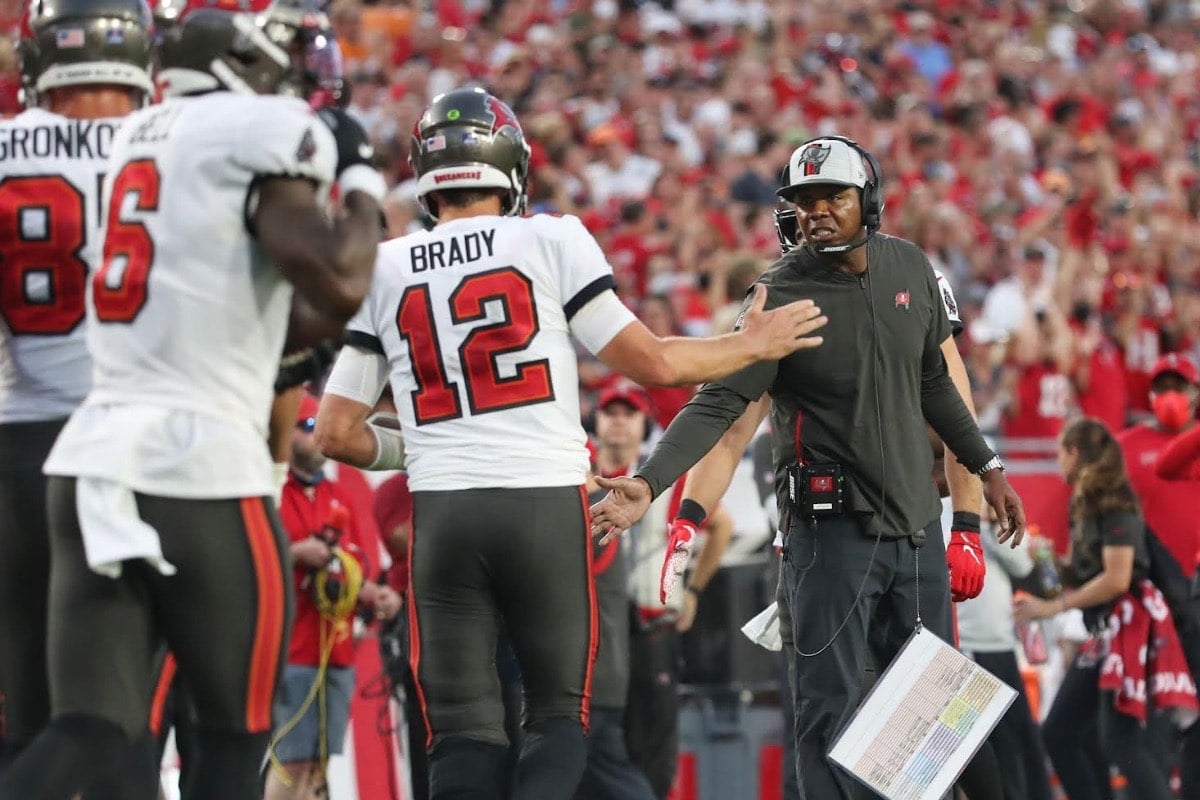 Is Bucs OC Leftwich No Longer An Option For Jaguars?

Home » Articles » Is Bucs OC Leftwich No Longer An Option For Jaguars?

Last week it seemed like Bucs offensive coordinator Byron Leftwich would be named the head coach in Jacksonville. In fact, the Jaguars wanted to hire Leftwich, but it hasn’t happened yet.

What’s going on in Jacksonville? And is Leftwich’s candidacy dead there?

A lot hinges on what Jaguars owner Shad Khan decides to do with current general manager Trent Baalke, who is unpopular with fans and within the NFL community. Leftwich interviewed with the Jaguars two weeks ago. He would have taken the job only on the condition that Baalke be replaced with Arizona vice president of pro scouting Adrian Wilson. Leftwich and Wilson grew close while working together with the Cardinals in 2017-18.

That hasn’t happened yet, despite a tweet from long-time Cardinals reporter Mike Jurecki suggesting that might occur on January 27.

Hearing the Jaguars are close to hiring Adrian Wilson as their GM and Byron Leftwich as HC.

Baalke does not have a great reputation around the league and wants to hire a coach that he can control to protect his job in Jacksonville.

There is also word that the Jaguars want to interview Rams offensive coordinator Kevin O’Connell. But that can’t take place until after the Super Bowl. The Jaguars had a chance to interview O’Connell weeks earlier in the process, but failed to do so. That is a clear indication about how messed up the hiring process is in Jacksonville with Baalke leading the way.

Jaguars wanted to interview Rams' OC Kevin O'Connell but cannot at this time because they didn't request an interview in the initial interview period, per source.

Former 49ers running back Michael Robinson recently blasted Baalke, who was an unpopular general manager in San Francisco from 2011-16, on NFL Network.

Leftwich won’t be leaving for Jacksonville unless Khan removes Baalke. Instead, the Bucs retain the play-caller for another season unless Leftwich’s name surfaces for another head coach vacancy, such as New Orleans. Or unless the Jaguars change their mind.

The Saints supposedly requested permission to interview Leftwich, but NFL Network’s Ian Rapoport suggests that won’t be happening this week.

I don’t know Scott. Something about that Jags owner. If i was an owner, I would want my coach to have people around him he is comfortable with. Rumor has it, the owner wants to mix and match incompatible personnel into the picture without the HC having a say in the matter. Thats the formula for sure losing. Leftwich will surely fail in Jville if he is not allowed to pick some of his staff. It might be a good thing for Byron if he is not hired there. That kid Lawrence is wasting away at QB. A few more… Read more »

I think it would be wise for Byron Leftwich to refuse the job under the current setup in Jacksonville.  We can certainly look at our own franchise’s history. After Malcolm Glazer died it took many years for his children to get the financial empire stabilized. Only then were they able to focus properly on what needed to be done. It took them years to find Jason Licht and then to stick with him long enough to get great results. After he brought in Bruce Arians and they in turn secured Tom Brady, only then did we get our second Super Bowl win. I believe Licht would have been… Read more »

And we don’t truly know if he hasn’t already turned down the job if his certain conditions aren’t met. Listen, this entire offseason for this Buc fan has just seemed to go down hill since the lose to Rams. I know this is not true, but as a lifer Buc fan, it sometimes can feel that way. Will he stay or should he go questions galore. I’m pretty sure we’ll be ok when draft and free agency have been completed but this feeling is real, and I haven’t even really been interested in any of the other playoff games. It’s… Read more »

A little suspicous the BL signing with J Ville talk stopped the moment Brady’s retirement annoucement was leaked. If Brady leaves, I can see Arains following right behind him. That would pave the way for Lefty to become the Bucs next H.C. without losing our top asst’s. Arains has said many times he’d like to see Byron get his own gig. Retiring also would make that happen right away. We’re not going to turn it over to Bowles because Trask needs BL more than he needs Bowles. Stay tuned.

Bucballer is doing a 180• turn on Lefty. While I still feel he is a year or two from becoming a really good head coach with a resume that has calling plays for the GOAT. I now believe that the fact that BL is an interesting and dynamic young coaching talent begs the question? If this is so, so it appears to be, why not go ahead and either pay him now to keep him one more year so that he can succeed BA, as he has stated that he prefers to Coach one more. If u r rebuilding, I… Read more »

First of all you don’t as barely an offensive coordinator tell the owner of a NFL Football team how to organize his front office. Leftwich is out at Jacksonville. Maybe Sean Payton or someone like that could do it but not Leftwich. He probably hurt his chances for other jobs because that stuff doesn’t fly with others owners either. Would you go into an interview and tell the owner of a company to get rid of his head of operations? Not if you want to get hired. Dumb Move.

Not Dumb at all. A head coach position with GM like Baalke is not a job. Not an opportunity, not a way to feed your family, not a way to enhance your career.

Yes you do – if they want you as head coach. Quality head coaching is a sellers market, not a buyers market. Baalke is a proven coach killer – anybody who agrees to coach for him is a fool. Byron Leftwich is no fool.

There seems to be a general consensus that for some reason, people tend to see GM Baalke as an asswipe. Lefty, who has other interviews, should absolutely voice his concerns with working with him. If an owner desires a coach then it be hooves him to listen to his concern and more importantly hear who Leftwich feels he would be a better fit working with. U want a cohesive and amicable working relationship between GM and Head Coach. It’s within Lefty’s right and in the owner’s best interest.

I do not get the feeling Byron considers any head coaching job a must have. It seemed as if Arians had to talk him off the golf course a long time ago. Like to see how he performs with Kyle Trask.

Baalke is more than just “unpopular” – he’s a confirmed coach killer, with the last 5 head coaches who worked under him having been fired from their jobs. Can’t blame any HC candidate from refusing to work for him.

Maybe Khan is a bad owner – if he keeps Baalke around as GM that will confirm he’s a bad owner.