Koetter Quotes 8-1: Message To Winston Is Patience, Patience And Understanding 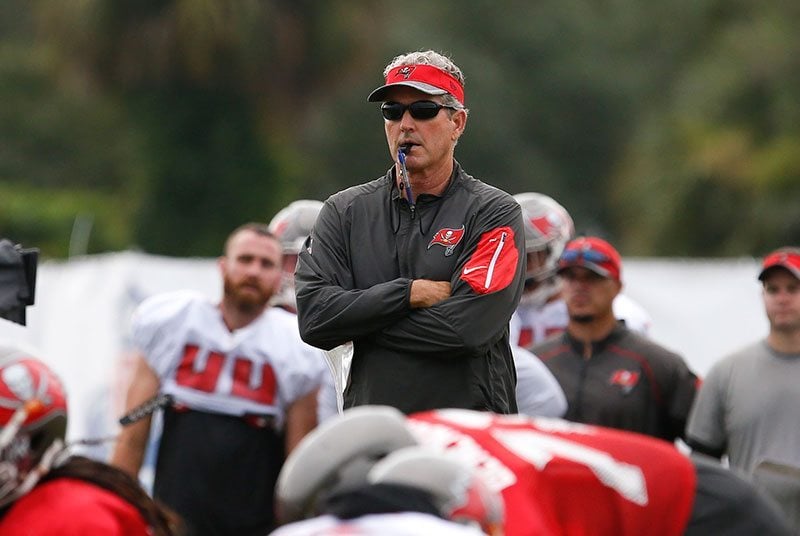 Koetter Quotes 8-1: Message To Winston Is Patience, Patience And Understanding

Bucs head coach Dirk Koetter spoke to the media following practice on Wednesday, discussing a number of topics including the play of the defense, some position battles and more.

Below is a transcript of the post-practice press conference.

(On how team looked after the day off)
“I don’t know about refreshed, but it was fine. We got good work on both sides. Second day in pads. We had good plays on both sides. I would say the defense got the better of them today. “

(On if defense has had the edge the past few days)
That’s pretty much every day. Yeah, I think the defense is winning right now, but September 10, we’re not playing each other. We’re playing the Dolphins.”

(On J.R. Sweezy)
“Last year was tough for J.R. because he had to be around but he couldn’t be in the mix. Of all the position groups out here O-lineman hate that the most. The group is very accepting and J.R. has fit right in with the guys. J.R. started 50 something games in Seattle, so it’s not like her forgot how to play, he just has to get back to the daily grind of it and how his body feels. He just came off back surgery, so he has just got to get used to it again. He’s fine. He is where he needs to be after five practices.”

(On chemistry of O-line)
Absolutely. Absolutely. It has to come together. But, at the same time, you have to cross train guys because only one team in the NFL started the same five lineman all year and that was Atlanta. Today Demar Dotson rotated out being the veteran that he is and we tried to get some of those young tackles with the 1’s as well.

(On Hargreaves getting his hands on the ball)
“Yeah, Vernon and (Brent) Grimes. Grimes has two really nice plays on the ball out there in that last period. Vernon had one, Javien Elliot had one, so turnovers is the name of the game.”

(On if going against DeSean Jackson will help Hargreaves develop quicker)
“I think so. I think that when you have a guy with elite speed you have to make some adjustments. I think the first day or two Vernon made a couple plays, but he also got beat on a couple plays. Match-ups is the name of the game in the NFL, knowing who you’re going against.”

(On Benenoch playing left tackle)
“Yeah, we’re rotating every couple days we’re rotating Benenoch and Wester. When you get in a game you will probably only have three tackles up, so that swing tackle has to be able to play both sides.”

(On his message to Winston)
“Patience. Patience and understanding the situation that we’re working on. I thought he did a really good job of that today. It was kind of funky we started off in two minute. In essence we started off like we’re in the fourth quarter and need a field goal to win and we got to 7 on 7 and it was like the first quarter. So it was kind of backwards today. Jameis, what he is working on, is knowing the situation that we’re working on and how he has to adjust his game accordingly. He’s been good at it in real games. I think in practice for all players, even though everything is scripted and there are chains, I think the players have the tendency to say “next play, next play, next play.” Jameis can’t really practice that way. In order for him to be great like we want him to be and like he wants to be, he’s got to understand exactly where we’re at in the game.”

(On if rushing touchdowns need to improve)
“The running game in general. We were a good running team in 2015. Not so good in 2016. I talk to the guys about the things you need to win in the NFL and statistically one of the things is rushing touchdowns. It is down the list a little bit, but it is still in the top ten. We talked about it. We’re not specifically working on rushing touchdowns right now. When we did our running drill we were 80 yards from the goal line, but that is an important part.”

(On how he measure Winston’s improvement)
“Oh boy that’s a good question. You threw the word measurable in there, so I can’t just B.S. it. We actually have people who chart everything Jameis does every day and they give us a report. I know his completion percentage, his third down percentage, his explosive percentage, how many passes he throws that are dropped, and percentages on his accuracy. So, all those things are measurable and I think there is a place for those. Personally, I have a tendency to go for my eye test. How I see it. I see it as slow and steady progress. Anything that a player is working on we don’t just go into a meeting, watch a few clips of film, tell them one time, and come out here and do it perfect. It’s a process.”

(On kicking competition)
“They told me that one of them was 5-for-8 and one was 5-for-7. We tried to put on some pressure with two-minute and we had some long field goals. Some 55 and 56 yarders. From just how I was watching, the hurry drill there at the end didn’t look great to me, but I really wasn’t watching the kicks. I was getting the line set up.”

(On safety competition)
“It’s good. There was no competition out there in the spring when you asked me because two of the guys weren’t here. J.J. Wilcox is getting better every day and Justin Evans, same thing, he is getting better every day. Justin maybe a little bit slower, but J.J. has played football in the NFL. Justin is feeling his way just like the other rookies are. Keith Tandy and Chris Conte are real solid and doing what we expect out of them.”

Benonoch and Wester taking turns at LT is really interesting. Good future development due to a lot of factors that may come up in the near future.