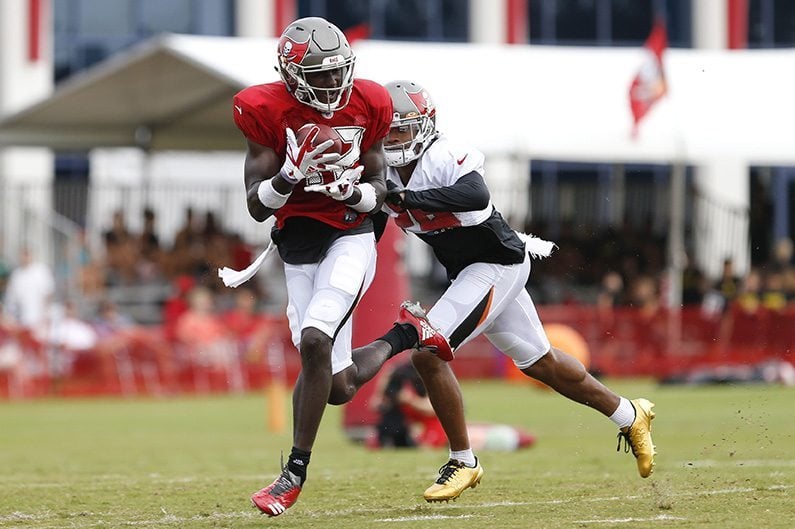 After their first day off, the Buccaneers players looked relaxed and ready to go on Wednesday morning, bobbing to the music and interacting with one another without the intense summer heat to bother them. You would have figured such conditions could have made for a highlight-filled day for the offense.

But, that wasn’t the case.

We don’t mean to say there weren’t good things that happened on Wednesday, but relative to what we’ve seen already, it was certainly the most shaky day in terms of finding a finished product. Quarterbacks Jameis Winston and Ryan Fitzpatrick looked off, both of which couldn’t find the red zone in the team’s one-minute drill (that started on the opposing team’s 20 yards line). On top of that, both kickers, Roberto Aguayo and Nick Folk, struggled in their kicking drills.

But, like we said, it wasn’t all doom and gloom. Here’s who stood out from Wednesday’s practice, despite a relatively down day.

Have A Brate Day

After warm ups and some light position drills, the team broke out into the one-minute scrimmage right away. The object of this was to get the offense and defense to kick it into gear right away with limited warm up.

Though the first team offense couldn’t put it in the end zone (or even the red zone), the connection between Winston and tight end Cameron Brate was prevalent. You can really tell when a quarterback and tight end are on the same page if they’re hitting their touch passes, and that’s what the play above was.

That wasn’t the only impressive catch those two connected on today. In the 7-on-7 drills, Brate took on linebacker Lavonte David in coverage and came away with the yards and the first down.

Fellow tight end, O.J. Howard, had a noticeable day yesterday blocking, and today it was Brate’s day to shine as a receiver – he did.

Chris Godwin is insanely good. And he slipped to the third round. #Bucs pic.twitter.com/VKpIA5Lbww

We do our Bucs practice MVPs each day, and honestly, Chris Godwin could be a choice every single day.

In the one-minute drill to open up practice, Godwin was on the second team, but he was the total focal point. Godwin received three targets on that drive alone, and hauled in two of them for catches (the third was way over thrown from Fitzpatrick).

Later in practice, in the clip above, Godwin was up to his old tricks and found the soft spot on a post route while working with the first team.

All of the hype you’re hearing about Godwin is real. He’s bigger than everyone thought, both in height and weight. He runs very smooth, he’s precise with his route, and he’s shown very reliable hands so far. After being given some slot routes over the last two practices, it appears this coaching staff is very aware of his talent, and are grooming him to get any playing time he can at any spot.

That's two interceptions now in camp for CB Robert McClain. This from the outside. Fitz threw the pass. pic.twitter.com/gMBhxCDPx5

Originally we thought Robert McClain was just a backup nickel cornerback brought in to help the young guys in front of him.

That’s not the case.

Instead, McClain has been moved to outside cornerback on the second team, and appears to be the best reserve cornerback they have. He’s not going to take playing time from Vernon Hargreaves or Brent Grimes on the first team, but that interception in the clip above was his second of camp, which is tied for the team lead. He shows a higher understanding of the position than say Javien Elliott or Jude Adjei-Barimah, and for that, he’s getting the reps he is. He’s been a very nice addition.

Grimes also looked good today. He had a few completions on him, but also some very nice pass break ups, too. He’s not slowing down at all, and after a year where he finished as one of the best cover corners in the NFL last season, hearing that should be very welcomed.

David Baker and his son Bentley drove a long way to see their favorite player, Jameis Winston. They got two out of the three boxes checked! pic.twitter.com/0wlXDsWYvP

Today’s fan spotlight highlights a really cool story we happened to catch during the autograph session.

We spotted this father and son, David Baker and Bentley, with a giant sign waiting for Winston to come sign something, meet them, acknowledge them; anything, really. The sign said that the two had driven from Alabama to watch their favorite team and their favorite quarterback practice.

In the end, their wish came true.

QB Jameis Winston FaceTime-ing with some fans who couldn't make it (featuring our own @MarkCook1970 as camera man). pic.twitter.com/OryrrBDkr4

Winston was able to meet David and Bentley and not only sign a few things for them, but also FaceTimed a few of their friends who also love Winston who couldn’t make it.

I heard that mixed emotions is like driving your mother-in-law over a cliff in your brand new Bentley (not the kid, the car)! Lol. When I saw the last few practices, I couldn’t tell if the defense was really that much improved or the offense was stuck in neutral and not making much progress at all. I was left feeling good and not so good all at the same time. Then I stopped and thought about it – what’s new? Picking up where they left off last year, the defense is improved. But the offense is practically new – not… Read more »

It seems like a two man race at nickle at this point between McClain and Elliot.

Godwin felt like a home run in terms of value where he was drafted. Good to see early returns and hope it carries into the season.