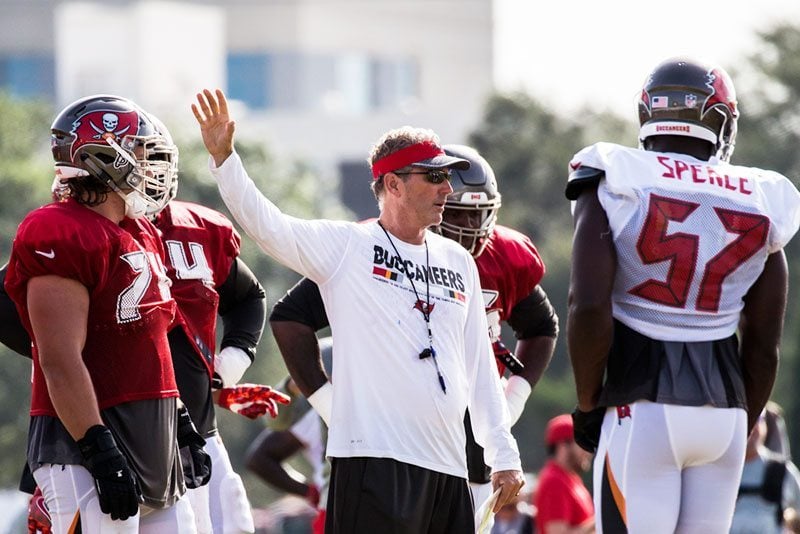 Bucs head coach Dirk Koetter spoke to the media following practice on Friday, discussing a number of topics including the kicking competition.

Below is a transcript of the post-practice press conference.

(On Roberto Aguayo)
“He was lights out. That was his best day at training camp and his best day in a long time, he looked great today. He’s been good. These guys, we talked about it in the spring, usually at 10 kicks it’s a one kick difference but today Roberto was money on both ends. I don’t think he missed all day, he was money.”

(Is Aguayo’s confidence back?)
“He did today. Whatever he ate for breakfast he’d better eat it every day.” 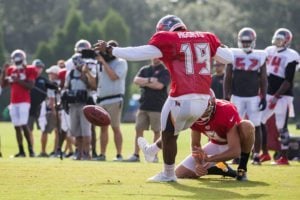 (On the kicking competition)
“We’ll see. We don’t need to make the decision today.”

(On Robert Ayers and Chris Baker missing practice)
“We’re going to start rolling some guys out. Today’s the third day of four straight days in pads and some of those guys that have played a while, we need to protect their bodies. You see all over the league. We believe in getting to the first game as healthy as we can, so with guys that we know what they can do, we need to see some of these other guys and some of these other guys need more reps.”

(On Josh Huff’s injury)
“He made a great catch and it’s typical on catches like that to get the ball under you and get the wind knocked out of you, but I guess he caught his elbow and they’re going to X-Ray his ribs, see what he’s got, but it was a beautiful catch and hopefully he’s OK.”

(On Winston)
“I don’t know if the defense was a little bit tired but the offense came alive a little bit today, starting with that two minute period, they went right down the field. Desean Jackson and Jameis had it going a little bit today. This might have been Jameis’ best day of training camp.”

(On Winston’s decision making)
“Jameis knows how to make decisions, coming from the program he came from and the record he has. When we’re talking about the stuff Jameis is working on, it’s microscopic, I mean this stuff is so tiny. Knowing when to take the check down, when to go for the big play, when to scramble. Some of our best plays come off of Jameis scrambling, he’s a great scrambler. When everyone isn’t going the same speed out there, it’s not always a true picture. We try to make it a true picture for him but it’s not always easy, but again, that guy is working around the clock on making his game better. We need him to sleep more, actually, but he’s making progress.”

(On Justin Evans)
“The thing about it is, he just hasn’t had a lot of chances to make a play on the ball. Sometimes the ball just doesn’t find him. Of the two new safeties is seems like the ball finds Wilcox more than it finds Justin Evans. Wilcox is playing a little more in the box and Justin’s playing a little more in centerfield. Sometimes it’s just luck of the draw.”

(On Wilcox in coverage)
“I don’t think it’s a surprise. He’s made plays on the ball and he’s also given up a couple of plays, too. I’m not trying to criticize, but you guys tend to make some big accusations based on two or three plays that jump out, but there’s a lot of plays out there. Don’t base everything you report on two plays, there’s a lot going on out there.”

(On new roster rules for preseason)
“It helps. No brainer, one of the best rule changes ever because when you get to that fourth game and you just cut 15 guys, yet you’re trying to rest 20 guys and you can’t rest all of your starters so the starters you don’t rest are pissed, like, ‘Why am I playing and this guy’s not?’ And it gives all of those other guys, those 15 extra guys, the whole league is looking at those guys. Everybody gets every tape so if it’s a chance for those guys to shine. I think you’re going to see a more competitive fourth game across the league.”

(On Ryan Tannehill’s injury)
“Not sure at all. It’s unfortunate when any player gets hurt, and I don’t even know what the latest on that is, but we’re too far out.