Had Sunday gone as planned, Caleb Benenoch would have spent the afternoon watching Tampa Bay do battle with Kansas City from the sideline.

The rookie offensive lineman earned his first career start last week against Chicago. While Benenoch played all 75 snaps filling in for Kevin Pamphile at left guard during that 36-10 victory, the performance wasn’t where coaches need it to be. Head coach Dirk Koetter said as much in the days after that game, and when Pamphile’s concussion symptoms caused him to miss Sunday’s matchup with Kansas City, the team decided to start Ben Gottschalk at left guard over Benenoch. 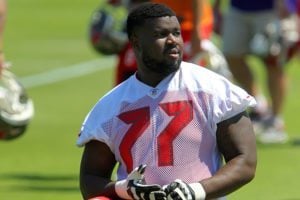 Gottschalk played next to Benenoch at center last week after backup Evan Smith suffered a knee injury. Regular starter Joe Hawley’s return to action Sunday in Kansas City left one spot to fill and Gottschalk got the nod at left guard – until he went down and out after 19 offensive plays.

“Much better, much better,” the head coach said. “And that’s to be expected. I think I said he had a rocky debut, rocky enough that we started Ben Gottschalk instead of him.

“Caleb came in and played 56 plays and played much better. I said before, I feel like he’s on a similar track as Kevin Pamphile. I wasn’t here in 2014, but in 2015 he did well. He played a lot of positions, did a solid job, and then this year he stepped in as a starter and has done a really nice job. Hopefully we can get him back here pretty quick. Caleb, he’s just missed so much time with missing OTAs because of the school thing, and then hurt in preseason, and then you just don’t get a lot of reps right now until all of a sudden you’ve got to play and this is real. This is real football, real speed, real physicality.”

Facing a high-quality Kansas City defensive front, Benenoch helped keep quarterback Jameis Winston upright throughout most of the game and get the ground attack going enough to gain 116 yards on 34 attempts.

On Monday, Koetter praised everyone involved with blocking in front of Winston. “We did a great job protecting against a good pass rush team, and it wasn’t just the O-line, although they did a great job. Adam Humphries had some nice chips, Doug Martin was phenomenal with his pass blocking, and Jameis was able to get through his progression.”

While getting Benenoch and Gottschalk a little positive work is a plus for the future, returning the offensive line to full strength is where Koetter and the Bucs want to be for the rest of 2016. Pamphile’s availability against Seattle this weekend will need to be monitored throughout the week and Evan Smith’s knee injury is expected to keep him out for another couple weeks. Gottschalk suffered a knee injury against Kansas City and a timetable for his return hasn’t been released.

Agreed that the blocking was much improved, and not just by the linemen, Doug Martin threw a couple of terrific blocks, including the one protecting Winston that resulted in the Alan Cross touchdown. Early in his career Martin wasn’t much of a blocker but he’s really improved the last two seasons.

Good to know that Benenoch and Gottschalk are in the future plans. Both gys will allow some changes on the OL next season.

Where is JR Sweezy and is he ever going to play this year or did our medical staff really screw up like they did with the Saints guard we signed with a turf toe a few years ago.

Yeah we just need to avoid offensive lineman in free agency. We can’t seem to keep them healthy.