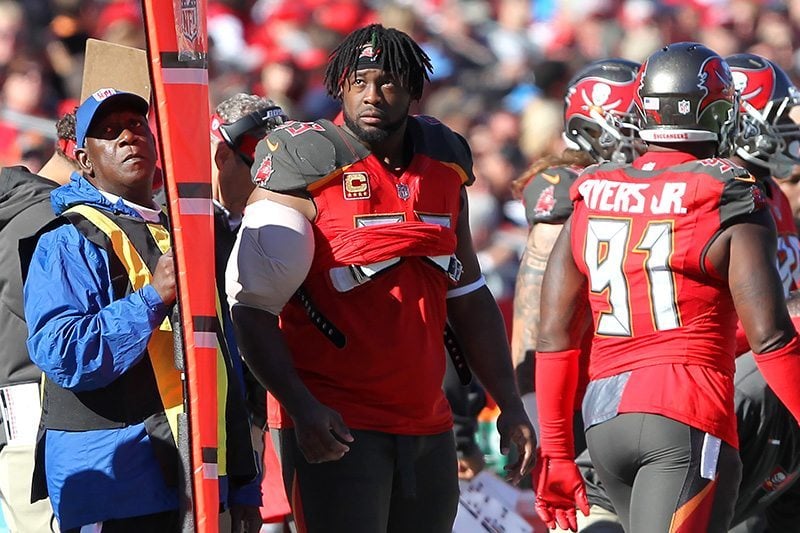 In a season that hasn’t gone as planned, Gerald McCoy has still performed at a Pro Bowl level. Two things are certain with McCoy and that is production on the field and a constant smile off of it.

Unfortunately, early in the second quarter we saw a different Gerald McCoy. The signature smile wasn’t present as McCoy sobbed and hugged teammates after exiting the game with a shoulder/bicep injury.

One of the teammates consoling McCoy was another veteran on the defense, Brent Grimes. Following the loss to the Lions, Grimes shared what his message was to McCoy.

“I just talked to him,” Grimes said. “I said, ‘We’re here and we’re going to compete. Just stay with us, talk to your guys, and help them out. He did a good job of that.”

On the other side of the ball wide receiver Adam Humphries pointed to the passion and leadership the Buccaneers lost on the field with McCoy sidelined for the remainder of the game.

“It was tough to see because I know how much Gerald loves this game,” Humphries said. “You could see it in his face when he was hurt on the sideline. It’s tough to see. He’ our leader and one of the best players in the league. To see him hurting so bad, knowing he wants to be out there fighting for us and playing for us, it’s tough for everybody to see him on the sideline like that.”

McCoy is no stranger to bicep injuries. He has been plagued by injuries in the region with two bicep tears, one in 2010 and the second the following year. It is still not confirmed what the injury is, and more will come out in the coming days, but world class athletes like McCoy know their bodies and given his history with this injury and his reaction on the field, it seems that McCoy fearing the worst.

When asked if the injury was similar to those suffered in the past, the all-pro defensive tackle continued.

“Yeah, it’s similar but it’s not quite the same. It’s a little different.”

Head coach Dirk Koetter was unable to provide any clearer information on the injury.

“It was a bicep injury and that is all that I know,” Koetter said. “It happened in the first half and he didn’t return.”

NFL Network’s Ian Rapoport told his network on Monday morning that the injury could cost McCoy the season, but he may not need surgery this time.

From @gmfb: As if the #Bucs needed more bad news, it appears they've lost DT Gerald McCoy with a torn biceps. pic.twitter.com/P883QNQlTr

If the injury is a biceps tear as many fear, that would mean the end of McCoy’s season. Before the setback, McCoy was spearheading a campaign to attend his sixth straight Pro Bowl, a streak that began in 2012. McCoy currently leads the Buccaneers with 5 sacks and 13 tackles for a loss. Heading into the matchup against Detroit McCoy also ranked fourth in the NFL in quarterbacks hits and leading the NFL in tackles for loss by a defensive tackle.

About the Author: Austin DeWitt

Lets not beat around the bush. Its torn. Just waiting on the confirmation MRI.

McCoy should go on IR and same for any of the injured players that can’t play in the next game. If they aren’t ready this coming week then put them on IR and lets see who else might surprise us or not. The season is over; time to see who we can save for next season. I was hopeful, but not anymore.

Not to be overly pessimistic, but Mccoy has been playing extremely well for a DT at his age. Sooner or later his production is going to drop. Since he has been the only disruptive force on the d-line, I find it difficult to believe next year is going to be any better.

His replacement should’ve been drafted by now. Licht has neglected drafting both sides of the line for too long. Add D.T. to our many needs list.

On the bright side, there’s no longer any reason to risk further injury. Place him on IR and give some of the young guys a chance to prove themselves.

See any young guys doing a thing on the D-line. For that matter, see any old guys on the D-line getting the desired results?

Not at all…aside from GMC we have no D-Line. No point risking the one good thing we have