McCoy Not Happy With Bucs’ Pass Rush, How He’s Being Used

Home » Articles » McCoy Not Happy With Bucs’ Pass Rush, How He’s Being Used 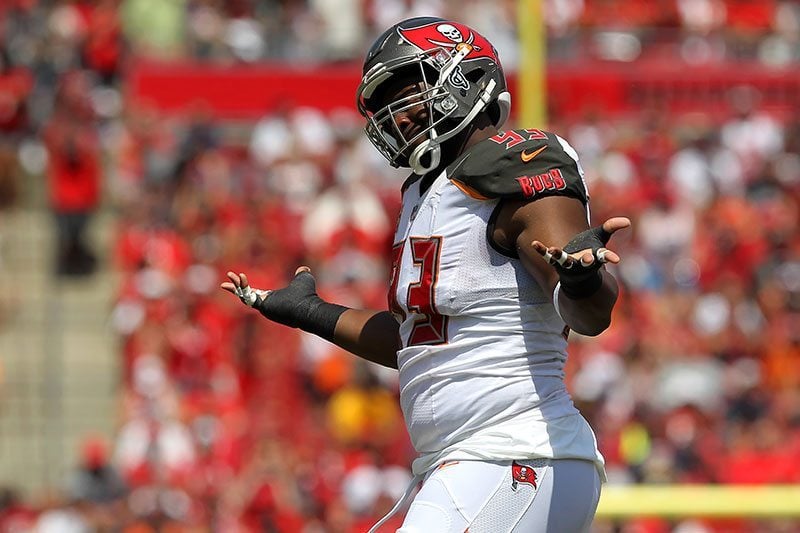 McCoy Not Happy With Bucs’ Pass Rush, How He’s Being Used

Home » Articles » McCoy Not Happy With Bucs’ Pass Rush, How He’s Being Used

Buccaneers defensive tackle Gerald McCoy is frustrated with the team’s pass rush – or lack thereof – and has every reason to be.

Not only does Tampa Bay rank last in the NFL in terms of sacks with seven in six games, the Bucs are causing their own problems by stunting too much and not doing enough up-field rushing. The Bucs recorded one sack last week in Tampa Bay’s 30-28 loss at Buffalo, which was when defensive end Robert Ayers beat a tight end to get to quarterback Tyrod Taylor. 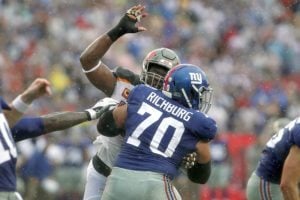 “I don’t know if I can pinpoint it, I’d really have to break some things down and go into some things I would rather not go to,” McCoy said.

McCoy doesn’t have to. As I pointed out in my SR’s Fab 5 column, those stunts aren’t working because of the poor design of the scheme and the poor spacing that accompanies it.

The Bucs run a lot of “games” or “twists,” which is when two defensive linemen cross with the first lineman penetrating one way and the other lineman looping around behind the other to try to create some misdirection and open up some pass rushing lanes.

McCoy, whose two sacks are tied with fellow defensive tackle Clinton McDonald for the team lead, is right. They are poorly executing the stunts, as legendary Hall of Fame Bucs defensive tackle Warren Sapp pointed out in the aforementioned SR’s Fab 5 column, often running into each other and creating running lanes and throwing windows for opposing quarterbacks.

McCoy expressed some dissatisfaction with his usage in the team’s 3-3-5 scheme on third downs last week in Buffalo when the coaching staff wanted to keep linebacker Kendell Beckwith on the field against the Bills because of the injury to defensive end Ryan Russell, who rushes in nickel pass rush situations.

McCoy played the three technique and nose tackle in the 3-3-5, and in the play below, you’ll see him waste time running laterally in the scheme of defensive coordinator Mike Smith and defensive line coach Jay Hayes rather than get up the field and penetrate. McCoy starts in the left “A” gap, crosses the center’s face, goes past the right “A” gap and then attacks the right “B” gap. By the time that happens, he’s double-teamed by the center and the left guard and rendered ineffective.

McCoy talked about his role as a defensive tackle in he 3-3-5 and isn’t necessarily happy with it.

“Your rush has to be different for sure,” McCoy said. “You can be aggressive, but not as aggressive because when you have a guy that can run like Tyrod could or Cam can, you have to make sure you keep your hands out in front of you. You really kind of just mirror the quarterback. For me, I make guys move. That’s why I give guards so much hell. Once I get them in space it’s a problem for them. But when we are in a three-man front I can’t really do that.”

Head coach Dirk Koetter wasn’t happy with the play of Tampa Bay’s 3-3-5 scheme or the third down defense in general.

“Our third-down execution in general was not good enough,” Koetter said.  “The goal with that is we were a little short on D-lineman and we were a little bit long on linebackers [so we were] just trying to get those three linebackers on the field at the same time. … No, it didn’t work well in this game, but alignments don’t win or lose games.”

McCoy said he’ll continue to be a good soldier and run whatever scheme or game Smith and Hayes want him to run.

“We’re just trying to figure out a way to win,” McCoy said. “I don’t think any coach is here to put clamps on anybody. That’s why I said it’s not about me. It’s about the team. The ultimate goal is to win. If the coaches feel like that’s the best way to win, then I’m going to go with it. I don’t game plan. I just play what the coaches call.”

But with seven sacks in six games, the 3-3-5 scheme and all the twists and stunts ain’t working.

It’s time to listen to the five-time Pro Bowl defensive tackle and let McCoy do what he does best – penetrate straight up-field, exploit one-on-ones and wreck havoc.

Ok so this is like the 4th player that has called out the scheme we run. Personally I hate twists and stunts, they do nothing but run players out of their gaps. This is problem for our d coordinator to get fixed asap. This scheme is garbage, whatever it is.

The bottom line of what we’re doing now is the 29th worst scoring defense in the league, a defense that Football Outsiders ranks as 32nd best in the league in DVOA.

But if it IS broke, then for gosh sakes, FIX IT!

It’s almost like Mike Smith is trying to be too cute and not allowing the guys to do what they do best. I mean it literally can’t be any worse than it is right now. This defense is historically bad!

For some reason Smith is keeping Beckwith and Safety Evans on the field I just have to wonder if it is his call or someone else’s call?
Like our GM to prove what a wizard he is drafting players. I am not knocking Beckwith but there were some good looking D Linemen in the 3rd rd.

Maybe the reason Smith keeps Beckwith on the field is that he is leading all NFL rookies in tackling this season, doing a job that he wasn’t projected to do (start at MLB). Maybe Smith is keeping Evans on the field is because, in his very first NFL start the week before, he intercepted the GOAT quarterback, Tom Brady, in his first series on the field, and was second on the team in tackles that game. Ya think? Now, this issue is not whether Beckwith and Evans should be on the field … the issue is whether TJ Ward or… Read more »

McCoy needs to make it more about him then. He’s a leader of this defense, so we need a little more than a good soldier.

Agree Leaders lead right?? Problem is they don’t have any Elite linemen other than JMC.

McCoy can’t make it about him. The coach calls the scheme. We don’t need a war between players and coaches. We need the coaches to fix what they broke.

Didn’t we have this discussion when Shiano was here? Why can’t we get this defense right know matter who the coach is?

Why you would run a dumbass 3-3-5 and put one of the fastest 3 tech in nose is beyond me. I’m not a football coach, but that’s just stupid AF, and you don’t need to be a professional coach to see that it is. That’s what Stevie is for. If anything put his ass on the outside with 3-3-5. So irritatingly stupid sometimes.

Stevie T is on IR

Panthers will likely be down 3 of their 5 starting O-Lineman this weekend and we still wont get close to Cam. It really is a shame

Gerald is right . When I listened to the Smith Press Conference I wanted to throw up, but fell asleep before I could. How do the players stay awake when he’s talking? Smith has to go; the sooner the better. We need a coach to bring some fire to the Defense!

Stunts have their place, but they should be called from the field, not the sideline. We are running them far too often with little return…

let’s stop tying ourselves into knots trying to fool the defense. the only fools on the field ARE the defense when the team gets too cute. wanna see these guys out-execute the players across from them. trickery is all well and good, but if an opponent doesn’t respect your ability to execute the basics they won’t lose their composure when something unexpected happens. kinda like how a playaction pass is useless if a defense has no fear of your run game

*trying to fool the offense