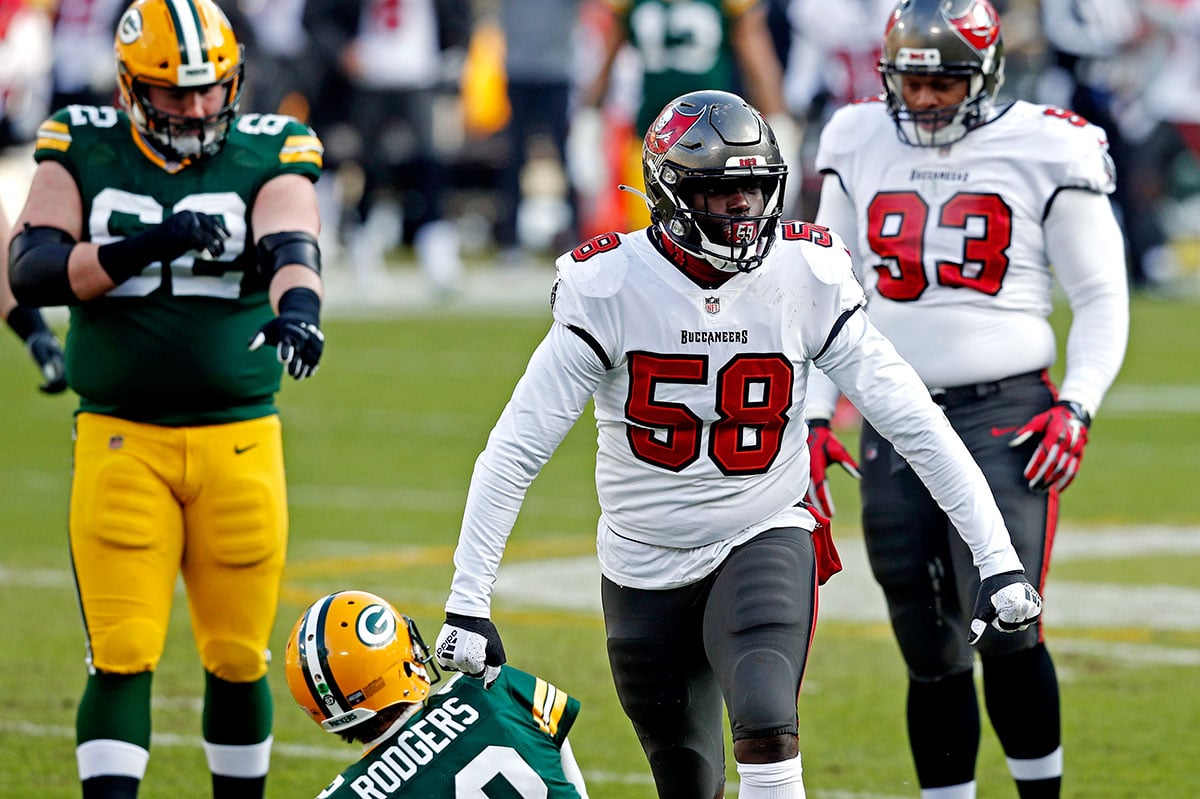 The Bucs traveled to Green Bay on Sunday and beat the Packers in the NFC Championship, clinching Tampa Bay’s second Super Bowl appearance in franchise history and becoming the first team in NFL history to play in a Super Bowl that’s being hosted in their own home stadium.

Tom Brady led the Bucs to a 28-10 lead in the third quarter and the defense stood strong as the Packers mounted a late comeback that fell short and Tampa Bay ended up with the 31-26 victory.

Due to the rare circumstance and magnitude of the game, we broke protocol and for the first time ever, we will not have a Most Disappointing feature this week. Instead we will break up the Most Impressive list into two articles.

OLB Shaq Barrett
The duo of Barrett and Jason Pierre-Paul had been missing in action for the most part over the last four weeks, but when the defense needed it the most, both came up huge in the win. Barrett finished the game looking much like the 2019 version of himself, totaling three sacks in the game to go along with five tackles, including two for loss.

OLB Jason Pierre-Paul
If it wasn’t Barrett pestering and harassing quarterback Aaron Rodgers, it was his teammate Pierre-Paul – and sometimes it was both of them at the same time. At the end of the day the Buccaneers needed every single play they got from their pass rushing stars as the defense was able to do just enough to keep the Packers from tying the game late in the fourth quarter, instead they forced them to kick a field goal with the hopes of getting the ball back. Pierre-Paul ended the evening with two sacks, five tackles and two tackles for loss.

LB Devin White
White may not have been quite as electric on Sunday against Green Bay as he was a week ago at New Orleans, but that didn’t mean his contributions weren’t just as impactful. There was no second-half interception from White, but there was a third quarter fumble recovery and return that led to the Buccaneers scoring a touchdown early in the second half to put Tampa Bay up 28-10. White led all defensive players with 15 tackles and the mentioned fumble recovery.

S Jordan Whitehead
While Whitehead was unable to finish the game due to a shoulder injury, with Antoine Winfield Jr. not even dressing, the task of leading the Bucs safeties group fell on Whitehead who forced two fumbles on the day, including one in the third quarter that led to the Bucs scoring a touchdown to push their lead to 28-10. Whitehead left the game in the third quarter but before being forced to the sideline, he managed five tackles and the two forced fumbles.

Defense was great today. Kept Rodgers in a constant state of panic. He kept looking for Suh… who was constantly double teamed today…and kept getting hit by JPP and Shaq! Beautiful to see. Buc have won 7 in a row! What a time to gel and play ur best! Go Bucs!

I think when you go back and look at the video that you’ll wanna out Vea on here. He had pressure upon the middle and enabled one on one matchups for these ends and they are. Great job especially being so thin at safety.

You are so right. Vea may have been limited but his presence was 1,000% effective and game changing. He will be playing at 100% come Super Bowl Time!

Vita Vea should be on this list. He pancaked an all-pro center in Linsley multiple times and collapsed the pocket making the job easier for JPP and SB

Missing from this discussion is Vita Vea. What a difference he makes, clogging up the middle. No surprise that our outside linebackers are better in pressuring the QB when they have to double team him.

That was Tampa D! Finish this out!

Roger’s is whining about the pass interference on King vs TJ … Even if we punted, GB would have run the clock off with QB kneel-downs to avoid Rogers getting hit again (too far away for a Crosby FG)

This win and the success of the entire season is all because of the entire organization from the top down. The Offense and Defense have helped each other in every way and it feels like they all work as a team more than just being two sides of the ball. Such a great season and I really hope they can use their experience against KC earlier this year to play like they did they last 3 quarters of that game and even improve on that. Such a great team full of great guys. So proud of this Defense the way… Read more »

Totally agree with your decision to only accentuate the positive. Let;s have nothing but good vibes going out here.
Hopefully the extra weeks rest will get Whitehead back in the game. He was hitting guys like a sledge hammer. Knocked Aaron Jones out of the game. OF course he knocked himself out too.
I think getting Vea back allowed the JPP and Shaq to pin their ears back and really go after Rogers.

I have to echo those arguing Vita Vea needs to be on this list. It’s never been more apparent than today how crucial Vea’s presence is in freeing up Shaq and JPP to bring pressure from the edges.

You have to add Vita Vea to that defensive list. Why did Shaq and JPP suddenly have such a sack explosion in just this one game and find themselves with so many one-on-one match-ups? (after being almost anonymous in the previous two play-off games) … because Vita Vea was pushing the center back and collapsing the pocket on almost every snap he played. I thought he had a huge game. I agree with all your other selections.

Would add Big 50 to this list. Shaq and JPP benefitted greatly from Big 50’s push up the middle.

Thank God for this defense, lol. Two straight games against top 5 teams in this league in which they got us the W. It was so encouraging to see Brady and the offense as a whole play such a brilliant first half. That was the best Brady has played all season against an opponent that mattered. His gaudy stat totals this season have been the result of absolutely demolishing poor competition, and being downright mediocre (or, often, worse) against good teams and/or defenses. But that first half today was really strong. I was feeling SO good. But man, that second… Read more »

How about shaq!!! I’ll be honest. All season long I’ve been annoyed with shaq because it seemed like he cashed in and just kinda lost his edge. He dropped off 10 sacks from the previous year and was non existent in the playoffs up this point. Then in the biggest game of his life he registers 3 sacks. I’d like to look at the splits and wonder how much credit goes to vita vea but this defensive line is better than the one that won us a super bowl if shaq plays like this. Way to be clutch man. Vea-sue-gholston-JPP-shaq.… Read more »

Vita Vea needs to be on this list. No coincidence that Barrett, JPP and others went off.