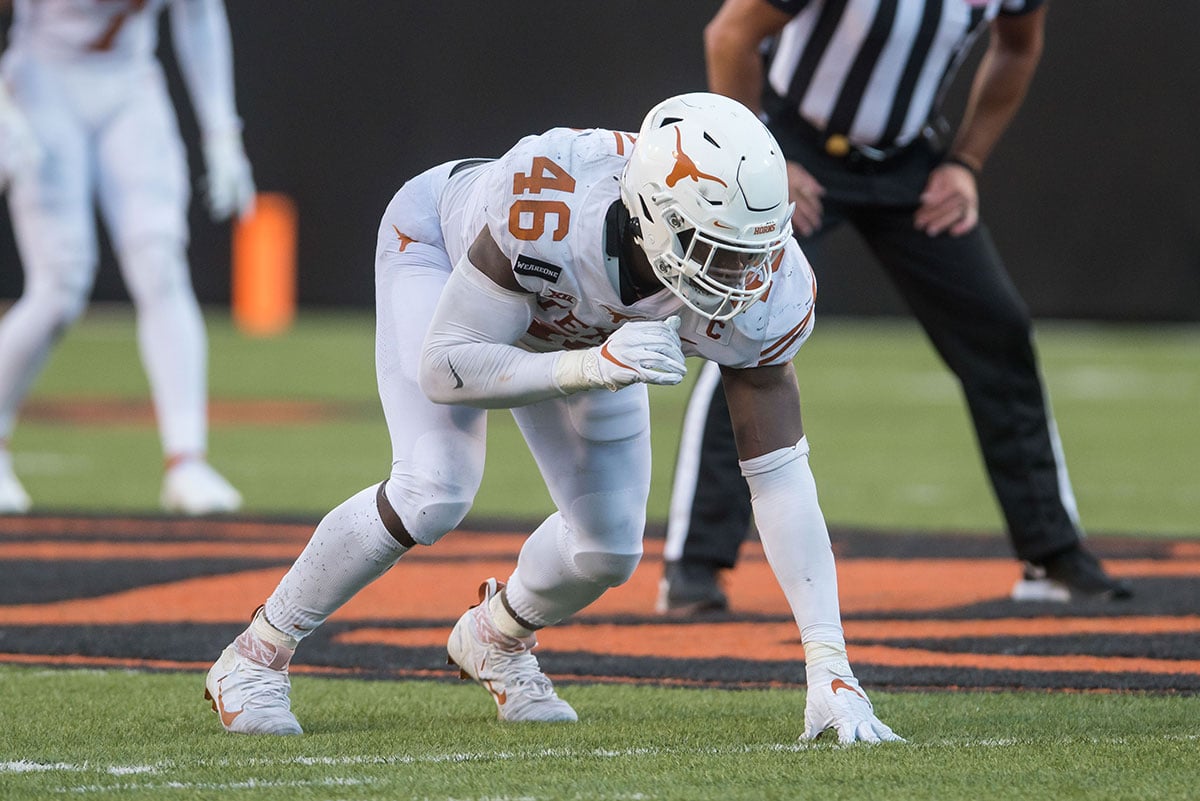 Pro Day numbers are NOT the same as Combine numbers, but when a prospects shows his elite athleticism on the field and the workout results confirm it, that’s a pretty good sign you’re at least getting the type of movement you want at that position.

In a nutshell, that’s Ossai. At Texas’ pro day last week, Ossai checked in at almost 6-4, 256 pounds while running a 4.65 40, jumping 41.5 inches on his vertical and just under 11 feet in the broad. Both jumps landed him in the 99th percentile for his position, per Pro Football Focus, showcasing the reason why NFL teams are excited about his potential at the pro level.

The concern is that there is very little polish to Ossai’s game, as he has spent much of his college career as an edge/off-ball hybrid, which left him well behind on establishing a pass rush plan or being able to win 1v1 against offensive tackles. The level of inconsistency in Ossai’s tape really kept me guessing; he could get pancaked and knocked around for a couple plays, then all of a sudden flash into the backfield for a tackle-for-loss. His best plays were typically a product of his pure athleticism rather than any sort of developed skill.

A lot of Ossai’s production came in unblocked situations off games up front, or aided by blitzes that gave him easier opportunities to get into the backfield. Ossai was also throttled by top competition that he faced, as Oklahoma State’s Teven Jenkins threw him around and Ossai had no success working a pass rush plan either. 3 of his 5.5 sacks this season came against Oklahoma State, which was probably one of his worst games, as the production was pretty deceiving when you watched the tape.

It bears mentioning that Ossai is an absolute dog on the field, going 100 miles per hour from snap to whistle. He seems deterred by nothing, running down plays from the backside and chasing ball carriers well into the secondary. He’s a very good athlete, an easy mover and has a relentless motor, but Ossai is massively under-developed as a pass rusher and hit-or-miss as an edge defender tasked with stacking-and-shedding blocks regularly in the run game.

In terms of what you want to develop, Ossai has everything from an elite frame, length, flashes of power, athleticism, speed and an elite motor. But it’s all so raw that it’s hard to imagine him playing a major role in year one of his NFL career. Ossai will need time, great coaching and a strong work ethic to put together a pass rush plan that brings him consistently positive results in the NFL.

I’d be very intrigued to add Ossai at some point on day two of the draft, but he is a massive projection where he is currently slated to be selected in the first round. There’s no go-to move, no counters, too many plays that end with him on the ground, too many missed tackles and not enough college production to take a risk that high in the draft.

Landing in Tampa Bay would be ideal for Ossai if the team re-signs Shaq Barrett, as Ossai would win the No. 3 edge defender role pretty quickly, but wouldn’t be forced into a major role early in his career. He could develop behind Jason Pierre-Paul, get stronger and then step into a bigger spot in 2022 when the veteran outside linebacker is slated to hit free agency. In the meantime, Ossai would be a fun blitz package piece for defensive coordinator Todd Bowles in 2021, considering his elite athleticism and his off-ball experience at Texas.

But the fit also must be considered from the Bucs perspective. Ossai reportedly has the character and work ethic the Bucs would want in their locker room, but the lack of refined skill is a concern. He would be a big project for defensive line coach Kacy Rodgers and outside linebacker coach Larry Foote to take on, and having a plan for his development would be critical. There are almost certainly other players that will be on the board at No. 32 that I would rather see the Bucs select, but it would be fun to see if Ossai’s motor and athleticism could be molded into a stud in Tampa Bay over time. If he’s there at No. 64, I would strongly consider selecting him.

There’s too much uncertainty there. As risky as the draft is, I’m not going all in on this guy. Maybe in the 2nd. Without a pressing need, I’d rather have a guy with a lower ceiling but higher floor.

I remember a quote by Bill Parcels defining “potential”. “Potential is a French word that means you aren’t worth a $hit right now.”

Bucs would need to nab a veteran rusher so Ossai could develop playing a more limited role at #3.