PewterReport.com analyzes the top players in the 2018 NFL Draft with its position previews. Trevor Sikkema previews the wide receiver and tight end positions with a comprehensive look at what the Bucs have and what they need, plus a detailed list of this year’s top passing weapons, and finally, offers up the annual PewterReport.com Bucs’ Best Bets – one early round pick, and a pick from the later rounds.

What The Bucs Have At Wide Receiver

The Tampa Bay Buccaneers’ offensive weapon history is not as rich as other franchises around the league. They’ve had some nice names at wide receiver like Keyshawn Johnson, Keenan McCardell, Vincent Jackson, Joey Galloway, Kevin House and Mark Carrier, but most of those guys were spaced out across the span of 30-40 years. As of last year, for the first time in, well, maybe ever, there was talent all across the receiver position.

Mike Evans is the big name – and for a big reason. He’s one of only four receivers in NFL history to start their careers with four straight 1,000-yards seasons, and his fourth one came while missing a game due to suspension and having his starting quarterback out with injury for some of the year. DeSean Jackson was brought in last season to give Tampa Bay a dynamic deep threat that it has rarely had over the course of its existence. Though Jackson did have a down year statistically, his presence on the roster will still be a big one going into 2018 – hopefully with more effectiveness. There’s a chance 2018 is Jackson’s last year in Tampa Bay, as his contract is set up to give the team somewhat of an out after next year as they brace for a big contract for quarterback Jameis Winston.

Chris Godwin came on as one of a few great rookie surprises in 2017. Godwin only started two games for the Buccaneers, but ended the season with 525 yards and saved his only touchdown of the season to be a hero with the final touchdown of 2017, which gave his team the last-minute victory. Adam Humphries will begin his fourth year in Tampa Bay in 2018. He’s been a reliable player as a slot receiver and on special teams, but after not signing a one-year tender this offseason as a restricted free agent, the team could move on from him as well at the end of 2018. The team is pleased with the likes of Freddie Martino and Bobo Wilson for depth, but it’s likely that only one of those players is going to stick around for 2018, especially into 2019.

It’s hard to believe that just two years ago former second-round pick Austin Seferian-Jenkins was thought of to be the tight end of the future on this team and that it would be his sole show. 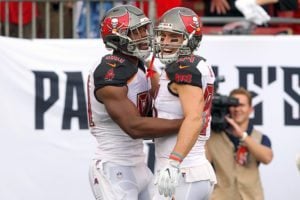 Fast forward to 2018 and things look a lot different. For starters, Cameron Brate is not only still on the team, he’s not only still contributing at a high level, but now he’s a starting-caliber player and is being paid like one after signing a six-year, $40.8 million dollar extension before free agency kicked off. Brate was tied for the league lead in touchdowns for a tight end in 2016. In addition to Brate, the Bucs are all-in on the dual tight end system proven by not only the draft investment of a first-round pick, but also the major playing time all year from their rookie tight end O.J. Howard. Howard finished the season with 432 yards on 26 catches with six touchdowns. He was used as an all-purpose tight end on passing downs and on run blocking downs. The team likes what they have in both of those guys.

After that, the tight end group is a mix of active and inactive roles between the youthful Canadian Antony Auclair, the flexible fullback/tight end Alan Cross and seldom used Austin Johnson. Both Auclair and Cross give Tampa Bay some depth and versatility, and both stuck around the 53-man roster for most of the year as match-up choices each week. Auclair is much more of the blocking type at 6-foot-6, 255 pounds, whereas Cross can be more of flex player out of the backfield.

What The Bucs Need

The Bucs needs at both wide receiver and tight end are interesting because though there isn’t a pressing need on the surface for either position going into 2018, there still could be room for them to plan for the future and allow themselves to have easy transition, if the draft sets up in such a way.

Jackson is on the books for $11 million this season with $7.5 million of that being guaranteed to him – translation: he’s not going anywhere this year. However, going into 2019 things change. Jackson will be getting $10 million in 2019, but has none of that money guaranteed. That means if the Bucs are looking to create extra money somewhere, say for Winston’s big extension that will likely be near $30 million per year, Jackson could be one of the pieces that move. That might likely depend on how well Godwin progresses in 2018, though. They won’t give up on Jackson if he has a lights out 2018 campaign.

In another instance, Humphries will likely have to be signed at around $3 million per year next year when his $2.914 million tender runs out. Are the Bucs going to spend $3 million a year on a slot receiver when they already have three receivers in front of him, or can draft a rookie one for cheap? That’s all to be determined, but again, this could all come into play if the right players are available at certain picks. Tampa Bay likely is not going to force the needs of either tight end or wide receiver at any draft pick, but that doesn’t mean the team wouldn’t pick one – likely a receiver rather than a tight end – if it fit.

Trevor Sikkema is the Tampa Bay Buccaneers beat reporter and NFL Draft analyst for PewterReport.com. Sikkema, an alumnus of the University of Florida, has covered both college and professional football for much of his career. As a native of the Sunshine State, when he's not buried in social media, Sikkema can be found out and active, attempting to be the best athlete he never was. Sikkema can be reached at: [email protected]
Subscribe
Login
Please login to comment
14 Comments
Oldest
Newest
Inline Feedbacks
View all comments

In this draft I think we stand pat at TE and WR, unless we move D Jax…..

That would be ideal.

They have the need, just hate sending him to an NFC team. How about San Diego?

Unless we trade Jackson, we shouldn’t spend a single pick on Receiver, and we have no reason at all to use a pick on a Tight end.

Why are we talking about TEs and WRs?

C.J. Anderson released by Denver today. 27. Good back. Would line up well with Payton.

Had the same idea when the Broncos released RB C.J. Anderson/Cal 5-8 224 . Anderson had 1,007 yards rushing last year with 3 TDs. He is a 6 year veteran at age 27 and will be a free agent. Bucs TEs coach Ben Steele was on Cal coaching staff in 2011-12 when Anderson played there in college. This is Koetter’s opportunity to get his Maurice Jones Drew RB from his Jacksonville days. They are both former Cal RBs with similar running styles. Rumor is they made a run for RB Carlos Hyde in early free agency. Let’s see what the… Read more »

Picking up CJ Anderson and landing Quenton Nelson in the first would be a blessing, IMO that would free us up to go defense with all of our remaining picks.

But I don’t remember ever seeing a rumor about us pursuing Hyde, the RB I saw us linked with the most during FA frenzy was McKinnon.

I don’t think Koetter said exactly what RB they were pursuing, but it was rumored to be Hyde, McKinnon, or Dion Lewis. Doesn’t matter who but that the Bucs were in the hunt, just didn’t get one. May be they will try again or take one in the draft or both. Good luck on your choices! Go Bucs!

Hey Trevor how mad would your buddy Jon be if he saw Anthony miller as WR 11?

If Pettis was still on the board and someone would give us the current pick for DeSean Jackson, I would say make the trade and get Pettis. That is not a shot at DeSean Jackson. Jackson is just not a good match with Winston. Jackson will be much better with a quarterback who will laser it in to him in stride as he blows past the last defender. Pettis seems better able to break stride to grab a ball thrown up for grabs. I think that it would be a win-win. I wonder if it is a deal that Dallas… Read more »

I would like to see a trade with Dallas. But I don’t think they would give up a 3rd it would be great if they did. I Would be happy for a 4th or anything just to get Djax out of Tampa.