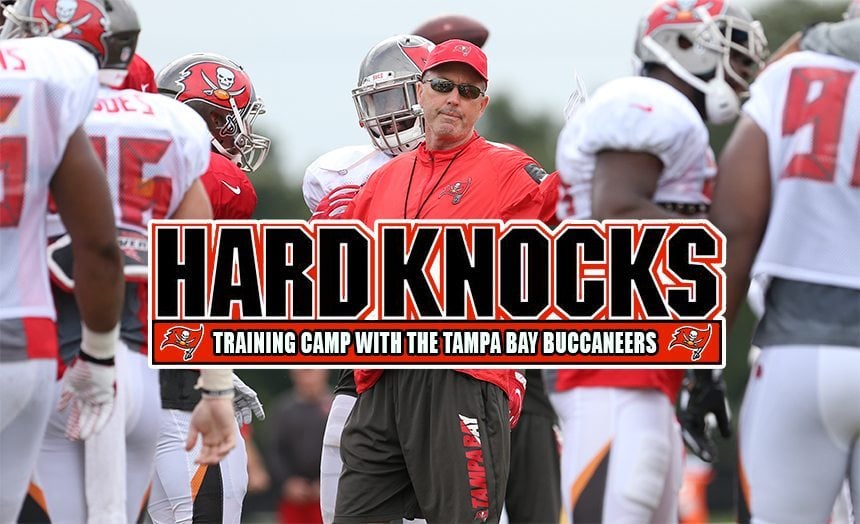 It’s hard to believe Tuesday night was the season finale of Hard Knocks: Training Camp With The Tampa Bay Buccaneers, and the reason it’s so hard to believe, is because even though so much has happened since then, it’s hard to believe that the preseason is already over – sometimes we still feel like early training camp wake up call is coming the next morning.

But, regardless of how fast it went by, here we are: The regular season.

In the final episode of Hard Knocks, we saw the final preseason game, some behind the scenes stories of the starters, but most of the episode was the last shot for the bubble guys trying to make the roster.

These were out top moments from the season finale of Hard Knocks.

There wasn’t much face time for the starter players in this week’s episode, and that’s because a good chunk of them didn’t even practice, let alone play in the final game.

However, there was a scene with some of Tampa’s biggest stars that made our most surprising moment.

Gerald McCoy, Brent Grimes, Doug Martin, Lavonte David, Jameis Winston and Mike Evans – one player from each unit of the team – all went to Charley’s Steakhouse in Tampa. While at the table, one dinner conversation that came up was what each player would do if they weren’t a football player.

McCoy said he’d be an actor. He said he’d love to not have to be in shape all year, just for movies instead, and then said the star actors don’t even have to take the hits – they have stunt doubles.

Martin, Winston and Evans then asked if McCoy could play a mean role and he said yes, but everyone in the room said, “no way” because McCoy is too nice.

This episode was pretty serious. There weren’t as many funny moments due to the nature of the last episode with cuts and all, but McCoy playing Oklahoma’s fight song in the gym and the outtakes at the end were pretty great.

Still, general manager, Jason Licht, asking Siri on his iPhone which players were the best 53 on the team made us laugh pretty good. Those were our top three, if you want to take all three of them.

There were a couple notable quotes in the final episode, but one stuck out to us more than others.

There was scene inside the training room where Winston, Peyton Barber and some of the training staff were hanging out before or after practice. During the conversation, Winston was talking about football in “the dirty south.” He talked about the mentality of players who comes from those areas (Alabama, Georgia, Louisiana, etc.), and gave us a quote that rang true to who he is, and why Bucs fans love him as their quarterback.

“I want it more than them. To them, this is just a sport. To me, it’s my passion, it’s what I love. It taught me a lot about life… To me it’s everything.”

The story was more captivating than the cinematography this week, but that was to be expected.

However, there was one shot that caught out eye. In the beginning of the episode, they showed a member of the grounds crew lifting up a drainage patch of water on the field that you wouldn’t see otherwise. The Bucs practice fields are so brilliantly designed to absorb water and keep the ability to play on and recovery from rain. That showed some of how, something everyone should appreciate.

The favorite moment, as it has been for weeks, really hasn’t been the “favorite,” but more so, the most impactful.

It was the final ten minutes of the show with all the roster cuts.

“I hate [cut day]. I would rather drive across the country with Skip Bayless, and no radio working, and the heater stuck on, and with the windshield wipers stuck on.”

Some of the cuts were tough to watch, such as wide receiver Donteea Dye and even quarterback Sefo Liufau. For Dye, he surely thought he was at least going to be a practice player, as he was last year. However, the team opted to go with the younger Bobo Wilson and develop him instead.

Watching Dye hear that, knowing that it was because of his injury, and watching him clean out his locker was tough since you got to know what a great guy he was through the show. It was a powerful moment when Koetter told him during his exit meeting, “if you need me, call me.”

You know he doesn’t say that to everyone.

It was also cool to see how the team formed the practice squad after cuts, and it was especially unique to see one player, Jeremy McNichols, shoot them down. HBO showed a side of Licht not many have seen as he reacted to the news of McNichols leaving. Licht is a former scout. The draft is what he loves. His draft picks are like his children, and the additions and subtractions of them mean more, we’re sure.

Moments like that, seeing the side of people you don’t normally get to see, completely uncensored, is what made this show a treat for all Bucs fans.

But now it’s in the past. It’s just a show you can go back and watch.

The future is next.

“The most crucial ingredient for a team to achieve and sustain success is the character of the players who lead it.”

McNichols really made himself look bad. He was mopey, soft, lacked confidence and in the end, hypersensitive. Riley conversely only sees opportunity. There’s a maturity there that is captivating even if he has physical limitations.

Joe Dirt are the kind of People the Bucs want! Not cry babies that don’t learn the play Book!

I don’t understand why McNichols decided to go to SF. The opportunity is going to be the same, but now he is gonna have to try to learn an entirely new playbook, which he apparently sucks at.

IMO McNichols maybe IMMATURE. As you stated a new playbook to learn and he maybe a west coast kid. I know his pay will be less in California tax,tax and higher cost of living.

Doesn’t seem he has the awareness to acknowledge his issues picking up the playbook/checks. Rather than take responsibility and stepping up he is running away hoping the 49ers will be less harsh with his mistakes. I don’t think he is talented enough to be successful this way. The lesson was to focus and be more vigilant and he ignored it.