Perhaps no entity in all of football media has as much information from which to draw conclusions as Pro Football Focus. This comes in handy for more ambiguous rankings such as tiering offensive and defensive coordinators, where an anecdotal conclusion can be reached if the process isn’t robust. PFF recently published their annual top six offensive and defensive play callers lists, drawing from a plethora of info to rank Bucs OC Byron Leftwich and DC Todd Bowles. 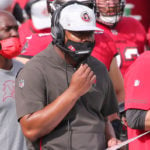 Leftwich ranked sixth amongst all offensive play callers, while Bowles came in fifth on the defensive side of the ball. It’s a far cry from where many saw Leftwich heading into the 2020 season, when PFF understandably did not rank him. Head coach Bruce Arians has been outspoken about how much the Bucs offense became Leftwich’s this season, saying that he and Tom Brady get too much credit and Leftwich doesn’t get enough.

Just 41 years old, Leftwich is still one of the youngest play callers in the NFL. The Bucs offense transformed after the bye week, throwing more on early downs and leaning more heavily on play-action for success in the passing game. Leftwich also showed off a creative side that Arians hasn’t, working in some wide receiver runs, more creative perimeter screens and even a few trick plays.

As for Bowles, he actually topped PFF’s list in 2019, despite the Bucs defense not being among the top statistical units that season. But over the second half of the 2019 campaign, Bowles impact was felt across the group. Tampa Bay’s young secondary began to play impressive football, linebacker Devin White started to flash and edge defender Shaq Barrett led the league in sacks.

It was clear that the unit was heading in the right direction entering the 2020 season, but the Bucs defense still struggled. During the regular season Bowles’ scheme grew stagnant, and was shredded in a few key games. In the playoffs, however, Bowles transformed as a coach, playing more press-man and two-high safeties than anyone could have foreseen given his career-long tendencies. The result was three dominant wins in the final three rounds of the playoffs, culminating in a 31-9 beatdown of the Chiefs in Super Bowl LV.

Arians did not make PFF’s cut of the top seven head coaches in the NFL.

The reason BA isn’t chosen high is because he delegates most of the work to his subordinates. But that is the main reason he should probably score as one of the best coaches in the NFL. Done properly, other than breaking down film and motivation, a head coach should only be concerned with game day and personnel decisions. You hire coordinators and coaches, so let them coordinate and coach. If they aren’t doing a good job, fire them. I’ve worked for all types of bosses but the ones I performed the best for were the ones who told me what… Read more »

Well, PFF strikes again, not even ranking the Super Bowl winning head coach among the top seven in the league, taking a two-decade loser team to the top of the league in just one season, no rebuilding years, etc. etc.
They discredit themselves with stupid ridiculous conclusions like this all the time.
As for ranking Bowles and Leftwich in merely the top six, they also discredit themselves.
What, do they believe that the Bucs coaching had zero impact on winning a Super Bowl?

I don’t remember thinking one time last season that our play-calling sucked. That was certainly not the case the year before. BL has grown into the job.

I can so let me help you: @chicago loss 19-20, @NY Giants 25-23 win barely, very next week home game against Saints 38-0 before BA decided to kick field goal with seconds left in the game. Clunky play calling against the Rams & Chiefs heading into the bi week. Afterwards Brady started calling plays at los. Leftwich nearly sunk this ship several times last year. That might help you Cheers!

Leftwich #6 lol? What a joke. Talk about revisionist history. I like him enough and he called a fantastic super bowl, but that was after a meh regular season and an awful first 3 games of the playoffs. Yes we were better after the bye week. But we also played 4 games against terrible teams after the bye. I doubt that was a coincidence. And his playcalling in the playoffs (prior to the super bowl) was terrible. He channeled the old Leeman Bennett/Ray Perkins run-run-pass play sequencing. We were as predictable as almost any team I’ve watched in the past… Read more »

Last edited 1 year ago by RCKP

I’d say Bowles belongs on this list. I don’t remember another game outside of the 1st KC game where I thought his playcalling was bad. In Leftwhich’s case though, I was frustrated with his playcalling pretty often. It wasn’t until after the bye week that he started playing to TB’s strengths utilizing more play action and throwing on early downs.

Agreed, though I’d say Bowles had a few other questionable moments. And I’m a big Bowles fan – I think he’s likely the best DC/defensive playcaller in football. But you could look at the Washington game in the playoffs as another example of a head-scratcher. Basically he has been a heavy blitz/zone blitz guy most of his career, and we hit a stretch last season where we almost stopped blitzing completely, and we stopped getting pressure. The NYG game was another I feel like we didn’t bring pressure, and Shaq and JPP had trouble winning their matchups. Jones had time… Read more »

Todd Bowles is fully responsible for the masterful win over the Chiefs in the superbowl, his defensive scheme was complicated and our guys were ready to deliver it. Most aggressive superbowl defense in the history of NFL, P. Mahomes was running literally for his life. No touchdowns. Doesn’t get better than that, PFF shames themselves again.

Weren’t both our Offense and Defense in the top 10 statistically and didn’t the team win the championship? Just what do you naysayers expect?

I’m not a naysayer but I’m an analytical person by nature, and I watch the details not just the score. You could make an argument that we had more talent than most of the league, which impacts our O and D ratings. And again, I’m a huge Bowles fan and I think Leftwich has great potential. Had some very good moments and clearly is good at the “managing personalities” part of the job (there are so many components to being a good coach, playcalling being just one of them). But to answer your question, what did I expect: Starting the… Read more »

And is spite of all of these flaws there’s a Lombardi Trophy in the lobby. Apparently with a big asterisk sticker. Football teams aren’t instant coffee.They take a little time to brew. Compared to the other 31 coaching staffs, our guys did pretty well.

No offense, but how does us winning the SB validate the coaches rankings? RCKP is 100% right. This list isn’t, “who’s the best team.” Its a list of the best play callers. And if you asked that question heading into the playoffs, neither Leftwich or Bowles would have cracked the top 10. Especially Leftwich. He was extremely mediocre for nearly the entire regular season. But I don’t think there were many people heading into the playoffs, that didn’t have concerns about our defense, and offensive play calling. Regardless of whether we won the SB or not, that doesn’t change how… Read more »

Bowls and Lefty did good job overall. There were times when I scratched my head especially with Lefty early in season. For a while every time we had 3rd and short he would chuck it deep and never worked. Not one time did I see it work for a while there. Especially the Saints games. Our o line also struggled a lot, injuries and Smith sucked beginning season (especially when we tried the Haeg experiment) at times compounding the stupid play calling early on. Leftwhich got more balanced and used play action more at end. First quarter of season the… Read more »