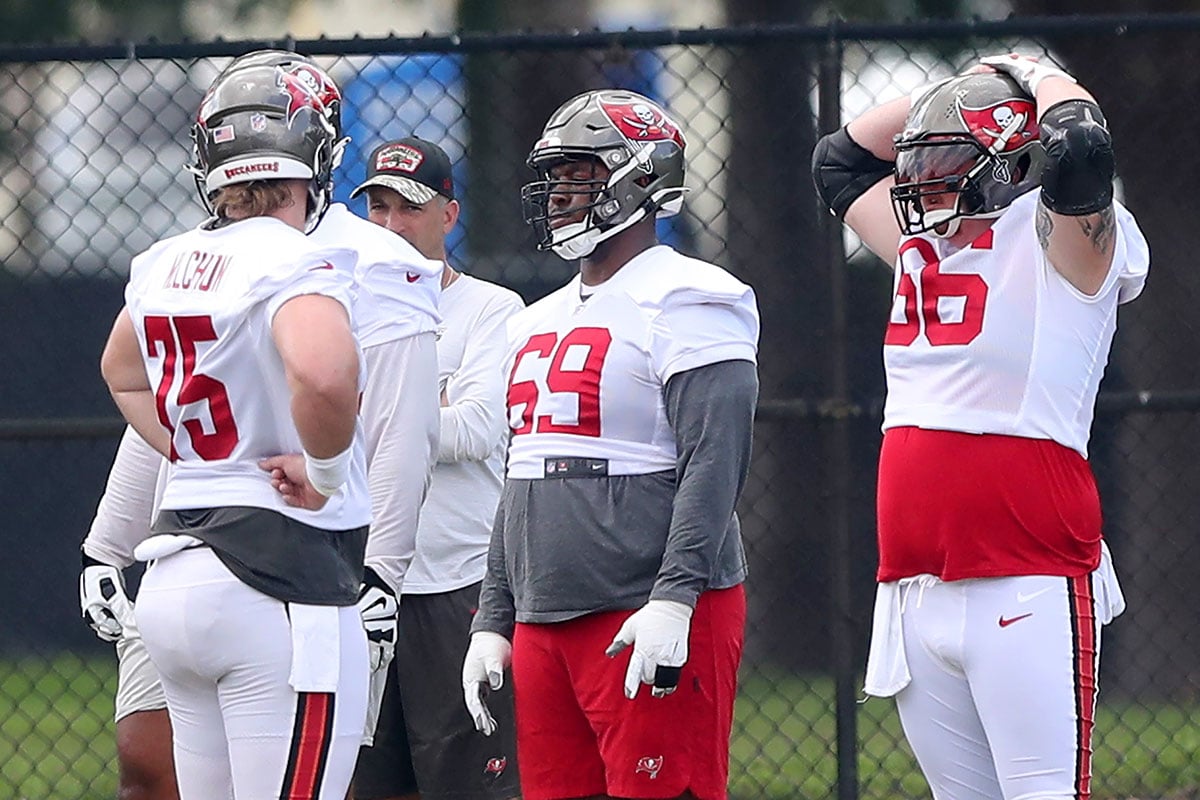 As the offseason rolls on, Pro Football Focus continues its series of ranking position groups. Yesterday they evaluated offensive lines. And to no one’s surprise, the Bucs ranked extremely favorably.

Mike Renner ranks the Bucs in the “Elite Tier One” category, placing them fourth overall. This category Renner describes as having minor or no weaknesses.

General manager Jason Licht has gone to great lengths to build a strong offensive line unit. In order to do this he has utilized multiple means of acquisition. Licht has spent premium draft picks on starting tackles Donovan Smith (second round, 2015) and Tristan Wirfs (first round, 2020). He has also used draft capital to trade for an established veteran in right guard Shaq Mason.

Licht hasn’t been afraid to spend in free agency either. In 2018, he signed center Ryan Jensen to the largest contract for that position in NFL history. He doubled down this past offseason by re-signing Jensen to a 3 year, $39 million deal.

Licht’s Investments Have Paid Off

Wirfs was All-Pro in 2021, while he and Jensen were both Pro Bowlers. Mason is widely considered one of the best run-blocking guards in the league, and Smith has proven to be a solid starter who has improved his play every season since entering the league per PFF.

Given the resources invested in the unit it should be expected that it is considered elite. Renner lists each of the aforementioned players as starters for the upcoming 2022 season and pencils in rookie Luke Goedeke as the starter at left guard, replacing the retired Ali Marpet. Goedeke will be battling with third-year veteran Aaron Stinnie, as well as Robert Hainsey for that role.

No matter who wins the left guard spot the line should be a strength of the team. With four established above-average-to-high-performers entrenched around the position the Bucs will have quarterback Tom Brady well protected in 2022.

Jensen, Wirfs, and the guards are fitting of of an Excellent rating, but obviously Mike Renner hasn’t seen “Slow as Mud and Low in Spirit” Donovan Smith play. If anyone has any doubt about Smith’s lack of skill and desire should just replay last year’s Ram’s game and focus on #76. Just like in the previous six years, the Bucs absolutely have no game to the left side of the field.

Its just wrong. Donovan has gotten better every year, but his problem has always been speed rushers. While he didn’t have a great game against the Rams, he was playing against Vonn Miller, and the entire offensive line was sh*t. His PFF grades reflect that he has improved every year of his career, but most people are still stuck in the past on him.

Ted in Tampa
Reply to  NaplesFan2.0

Donovan Smith led the Bucs OLINE in sacks allowed and in pressures last year. Two years ago he led the Bucs OLINE in sacks allowed and he led the entire NFL in penalties. Even Ian Beckles on WDAE recounts how Smith “struggles” especially against the Saints and Smith led the entire Bucs team in the number of times he was the Buc highlighted in PewterReport as “Player Who Must Improve.” PFF grades count little for OLINEmen, PFF even highlights this on their homepage. PFF most accurately grades WR, QB, running Backs, tight ends.

Furthermore, Donovan Smith didn’t let a pressure or sack happen through the playoff run to the SB, or in the last 6(?) games I think. He’s been the best Donovan Smith we could all hope for in the last year and a half, with his obvious problem still with speed rushers. He’s not elite, but he’s still very good.

I’m convinced that Ted and many other fans, who continue to see big #76 as a whipping boy, don’t watch the game and certainly don’t scrutinize other LT’s like they do Mr. Smith.

The Ted dude is a psycho.

You are literally lying out your ass.

It is literally impossible to be what you say about Smith, inasmuch as he allowed only 1 sack all season, on an offensive line that allowed a total of 23 sacks on Brady (one of the lowest team totals in the league – less than half the 47 sacks caused by the Bucs defense). So in your tiny little mind, the other 22 sacks must have been allowed by players who were never Buccaneers.

Smith is also tasked with protecting the Blindside facing the most talented Dline players week in and week out. I appreciate how far Smith has come (granted having to protect Winston wasn’t fair to grad our Oline on), although Wirfs faces similar talent and does it better, he holds it down enough to succeed. I still hope Wirfs is able to move to LT when Smiths contract is up and hopefully we can find a solid RT to replace him. Life after Brady is gonna be a real hang over but if we keep our Oline strong, whoever is next… Read more »

I am 100% with you there Spit. I almost said, ” He’s not Tristan Wirfs, but he’s very good.” in my last comment. If there is one weakness on the o line, it’s that the best pass protector is on the right side and not the blind side.

Eddie
Reply to  Ted in Tampa

Agreed with you, left side is a concern. Smith is a power left tackle, but have very slow feet that requires Tight end help with fast rusher. But that makes us short handed and more predictable on offense. Also pencil or chalk, in a Rookie as starting left guard just sounded premature. Some where, a speed rusher is salivating.

If I were you, I’d check the stats again. Donovan Smith allowed 1 sack, so exactly the same number as Ali Marpet. For reference, Alex Cappa allowed 5. People love being stuck in this archaic way of thinking, that once they see a player perform terribly, they perform terribly their entire career. PFF grades for olineman are more accurate than any grade you or I can give, and I would love for you to post anything that has them devaluing their own grading system lmao.

Last edited 21 days ago by NaplesFan2.0

1st of all I don’t think Cappa is great at all, he’s quite average at best. Why your comparing an average guard from small school to a 2nd rd LT is beyond odd and idiotic. Second you keep talking sacks allowed about Smith but Smith has led the NFL in penalties before. Not to mention his mistakes come at the worst times. Bottom line HE Is NOT GREAT. All things considered with his great durability, propensity for penalties at worst times, sucking against speed rushers, (sacks aren’t only measurement of a player pressures count too) he is average at best.… Read more »

Reading comprehension isn’t high on your list huh? Did you miss the part about the guy saying he lead the o line in sacks and pressures allowed? I also said he isn’t elite but very good. Youre not showing anything other than not being able to understand what’s written.

Funny but PFF gives Donavan Smith an 83.3 rating – far above “average” of 50. You keep pounding stupidly on your tiny little drum about how bad you claim Donavan Smith – but almost nobody else sees it that way, including most importantly the Bucs. Btw – Donovan Smith anchored the offensive line at the all important “blind side” of the all important Tom Brady, gave up just one sack the entire season while producing the no. 1 ranked passing offense in the league. Really, have you no shame or embarrassment for your stupid blatherings here? If not you most… Read more »

For all the flak that Licht gets for his misses (RB, K) the oline seems to be his sweet spot. If Donovan Smith is “the weakest link” then we’re still pretty damn good. Not too sure why they would pencil in the rookie as Stinnie has proven himself to be a good option at G. Maybe Goedeke or Hainsey beat him out at some point this year, but for now it looks like his job to lose.

Stinnie is a very good run blocker, but his pass pro needs work. You can hear it in the interview with Ryan Jensen and see it on Sunday. He did a decent job filling in for Cappa, but I distinctly remember him getting manhandled by Kenny Clark in Green Bay resulting in a sack and other pressures. It’s a competition right now, so saying its his job to lose before camp is extremely premature. There is a reason they drafted Goedeke in the 2nd round.

I knew as soon as I saw the title of the article that the typical commenters would emerge to dispute the overall ranking, and in particular, Donovan Smith. For months leading up to the Draft, Ted pimped Sean Ryan(sp) as the favored LT to unseat #76. Only problem is, the former Bruin is a guard, who as it turned out, wasn’t as highly regarded by the “experts”. I’m not real big on stats, so I’ll leave that up to Too Familiar and others. But I know this much. Our offense with the former Nitney Lion manning the LT position, often… Read more »

For all of you Donovan Smith apologists who try and rationalize his poor play (ever seen Smith make a downfield block? No, because he quits long before he can get downfield), two facts are undeniable. One, in six seasons with the Bucs, Smith has never made First Team, Second Team, or even Alternate All Pro mention. Two, Smith leads the all Bucs players in Pewter Report’s “Must Improve” as PR writes about previous games. You’ll see. This year, his play will only be slower.

His play was ELITE last year, in stark contrast to your CLAIMS that he lead the o line in pressures and sacks. Lying just to fit your narrative is stupid and will get a bunch of pushback on this site by people who actually watch the games. Do better.

For all of you Donovan Smith apologists, Pro Football Network (PFN) ranked all NFL starting OLINE tackles. Out of 32 teams in the NFL, PFN ranked Donovan Smith, 28th. Tristan Wirfs was ranked 4th.