PR Roundtable: What Is The Bucs’ Trap Game On 2022 Schedule?

Home » Articles » PR Roundtable: What Is The Bucs’ Trap Game On 2022 Schedule? 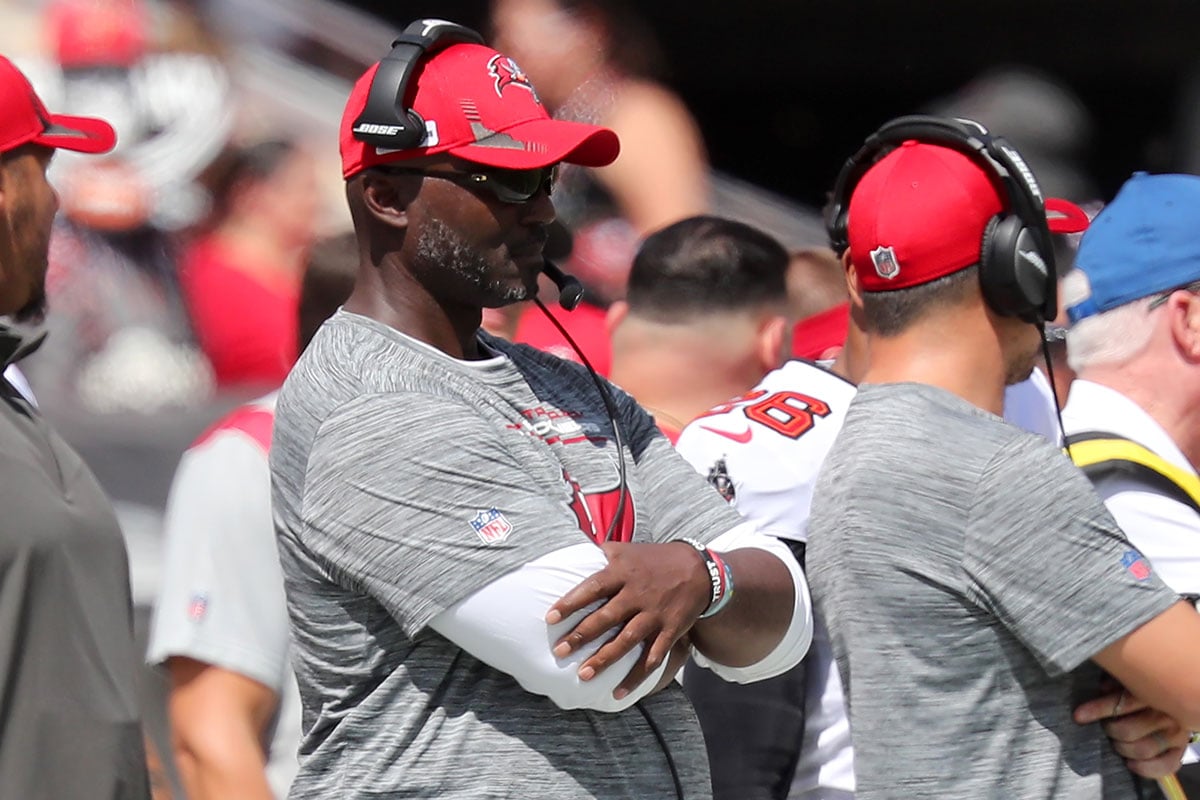 PR Roundtable: What Is The Bucs’ Trap Game On 2022 Schedule?

Home » Articles » PR Roundtable: What Is The Bucs’ Trap Game On 2022 Schedule?

For this weekend’s Pewter Report Roundtable, the crew tackles another tough question. This week’s prompt: Who is the “trap game” on this year’s Bucs schedule?

No matter how good the Bucs are with Tom Brady there has been at least one game where this ultra-talented Tampa Bay team has stubbed its toe. In 2020, it was losing to a Bears team, 20-19, in Chicago on Thursday Night Football. The Bears were 3-1 entering that game, but had beaten up on the likes of Detroit, the New York Giants and Atlanta prior to playing Tampa Bay. The Bucs really beat themselves that game with turnovers and wasted opportunities in the red zone. Chicago would end up with an 8-8 record. Last year, it was losing at Washington, 29-19, to a team that would finish 7-10. The Bucs also needed a last-second touchdown to beat the lowly Jets in New York, 28-24.

So which opponent could be the Bucs’ trap game this year? Considering that these unlikely losses or near-defeats have happened on the road, I’m inclined to say the Steelers. The Bucs will be coming off of a three-game home stand and what should be a winnable game versus the Falcons. Then they play the Steelers before a winnable road trip to Carolina. Pittsburgh will have a new quarterback replacing the legendary Ben Roethlisberger, who retired this offseason. Whether it’s journeyman Mitchell Trubisky or first-round pick Kenny Pickett under center, the Steelers could still be formidable because of their defense.

The common denominator in the losses at Chicago and at Washington – and nearly at New York – was that the Tampa Bay offense was held in check by a stout defense. The Bucs scored only 19 points against the Bears and the team now known as the Commanders. Tampa Bay only had 21 points on the board at New York until the final seconds when Tom Brady hit Cyril Grayson, Jr. with the game-winning TD. And who were the quarterbacks in those games? They were Nick Foles in Chicago, Tyler Heinicke in Washington and rookie Zach Wilson in New York. The Bucs will be favored in nearly every game, including the contest at the Steelers. But T.J. Watt, Cameron Hayward, Minkah Fitzpatrick and the Blitzburgh defense makes October 16 a potential trap game for Tampa Bay.

Matt Matera: Ravens May Get Overlooked With Rams In Town The Next Week

It could be the 2020 version of the Ravens that was the No. 1 seed in the AFC, or the 2021 team that missed the playoffs at 8-9. Baltimore is still a threat. I say that because the following week the Bucs host the Rams, and that’s a game they already have their circled on the schedule. The Rams have beaten the Bucs three times in two seasons, so with revenge on the mind against them, Tampa Bay might forget about how tough Baltimore can be. Add in the fact it’s a Thursday night game and that throws another wrench into the situation.

After a grueling opening month to the season, the Bucs have a light part of the schedule in Weeks 4-6 with games against the Falcons, Steelers and Panthers. That should be three wins there, so the Bucs might have their minds at ease before refueling that anger to finally topple the Rams in their fourth attempt. The Ravens might not look as difficult as they once were, especially after trading receiver Hollywood Brown. They’re thin at receiver and even if they have a great running game, we know the Bucs can always stop that.

There should be an improvement for Baltimore’s defense after spending their first three picks on that side of the ball, but is it enough to stop Tampa Bay’s offense with Tom Brady? Probably not. The one thing that may change the game is Lamar Jackson’s performance. He can still run all over the place and use his athleticism to win games. The Bucs can get to the quarterback, but are also prone to miss some sacks. With the Rams on the mind for the following week, I can see the Bucs possibly losing focus against the Ravens in the week before.

The Bucs will have run the gauntlet the first four weeks of the season going up against some of the toughest opponents on their schedule. They’ll have a game against a rebuilding Atlanta Falcons team before traveling north to face the Steelers. The Falcons appear as one of the only reprieves on Tampa Bay’s daunting schedule. However the Steelers will still have a physical defense, even if they don’t have the quarterback spot figured out. 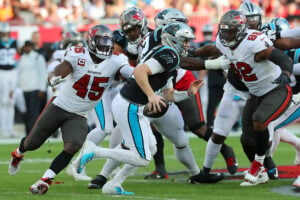 Which leads us into the second of the Bucs’ back-to-back road games – the Panthers. When you look at Carolina it doesn’t appear to present much of a challenge. And the Panthers haven’t been for the Bucs the last two seasons. In fact over those two seasons the Bucs have scored more combined points against Carolina than any other team in the division. However, sandwiched in between two physical opponents, the Panthers could steal one.

On offense the Panthers are loaded at the skill positions, with Christian McCaffrey, D.J. Moore, Robby Anderson and Terrace Marshall. With a revamped offensive line, Carolina might be able to get adequate quarterback play from Sam Darnold. Defensively, Brian Burns leads the way in a young talented group. Derrick Brown provides a stable force up front. Carolina’s trio of linebackers finished with over 300 tackles in 2021 and their secondary is young, talented, and versatile. The Bucs will still be the odds-on favorites to win the matchup. But after a difficult stretch to start the season, the Panthers could steal one if the Bucs aren’t focused.

Josh Queipo: Atlanta In Week Five Could Show How Focused The Bucs Really Are

Ever since the 2022 schedule was first released Bucs fans and pundits alike have been talking about the first four games. And for good reason. At Dallas and New Orleans, and home games versus Green Bay and Kansas City represent a veritable gauntlet to open a tough season. That is why traveling to Atlanta in Week 5 seems to me like such a land mine. 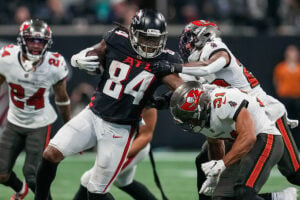 Think about it. Say the Bucs come out of the first quarter of the season at 3-1. They know they have the tough Pittsburgh defense in Week 6. But Atlanta? The Falcons are rebuilding. They don’t have a franchise quarterback. Atlanta should be easy, right? Not so fast. In my opinion, the Falcons will be better than a lot of people think. They had a stellar draft featuring six players by my count who could be starters by that Week 5 matchup.

A trap game by definition is a game where a higher-ranked team plays a lesser team that everyone expects them to win. Atlanta fits that mold. But they are also a division opponent. That makes them dangerous because they have a better understanding of the Bucs’ tendencies. It’s also a road game. Finally, it marks a game that will feature a good chunk of players the Bucs won’t have much film on at the NFL level. Look out for Week 5 against Atlanta. It could be a lot more dangerous of a matchup than you think.

Bailey Adams: The Germany Trip Shouldn’t Be Problematic, But It Very Well Could Be

There Bucs have very few “gimme” games in 2022. And the fact that there aren’t many of them makes the ones that are on the schedule all the more important. One of those games that could serve as a potential trap game is actually Tampa Bay’s voyage to Germany. In that international series matchup, Todd Bowles and Co. will play what looks like a really bad Seattle Seahawks team.

On paper, the Seahawks aren’t a team that the Bucs should even mildly struggle with. After trading Russell Wilson to Denver, Seattle has a quarterback room that features Geno Smith, Drew Lock and Jacob Eason. That shouldn’t scare anyone, especially a defense two years removed from winning the Super Bowl. Yet, with receivers like Tyler Lockett and DK Metcalf and running back Rashaad Penny, the Seahawks do have some weapons to deploy offensively. And while the defense certainly isn’t what it once was, safeties Jamal Adams and Quandre Diggs highlight the rebuilding unit. By Week 10, Pete Carroll’s team could be on its way to figuring things out.

All of that said, the trap game potential of the Germany trip has less to do with the opponent and more to do with the timing. It comes just before the Bucs’ bye week, and it caps off a difficult 10-week stretch of games. There are the four-game start everyone is talking about. But then immediately before the Seahawks game, there are meetings with the Ravens and Rams, which come in the span of 11 days. Coming off of those games and approaching the bye week, the Bucs could be banged up. They could be looking ahead to the final stretch of the year, which includes games against Cleveland, New Orleans, San Francisco, Cincinnati and Arizona. Of course, there’s also the chance that the long trek to Germany becomes a factor. All of that considered, Tampa Bay better be careful and focused as it heads into Bayern Munich’s Allianz Arena.

This Season I’m paying attention to pre season games to see what we really have as to Back Ups on Defense because I still believe this is our weak spot; don’t you think our opponents realize it too? Also, I believe Coach has to move Trask up to the second spot regardless, if he is ready or not, because some players look better than other players when they are playing in real games. Put players in the fire to see what they got; we don’t know that as to Trask.

Written like media writers and fans think. Always looking for a “story line” for each game. That is not at all how football teams – players and coaches – think. Football teams don’t think along “story lines” – they just think in terms competing and beating, and each individual doing their job. Nobody on the Bucs is going to be looking beyond any team they face this season or any season. They don’t care what the record is of any team they face, in the current season, or from last season. Any team can beat any other team in any… Read more »

LMAO here. They are all trap games if this Defense does not play well and its not improved. Last yr they were at about the 70% level on average. And even below that in some games. Thats simply not enough. Its ok for the regular season. But not in the playoffs. We shall soon see.

Well I sure hope neither the Steelers game nor the Seahawks game is a “trap” game since I’ll be paying a lot of $ to attend both on the road. Plus, I don’t want to hear from my old friends and family in Pittsburgh chanting “Here we go Steelers” over the phone if the Bucs lose.