Report: Bucs Exploring Moving Down – Or Out – Of First Round

Home » Articles » Report: Bucs Exploring Moving Down – Or Out – Of First Round 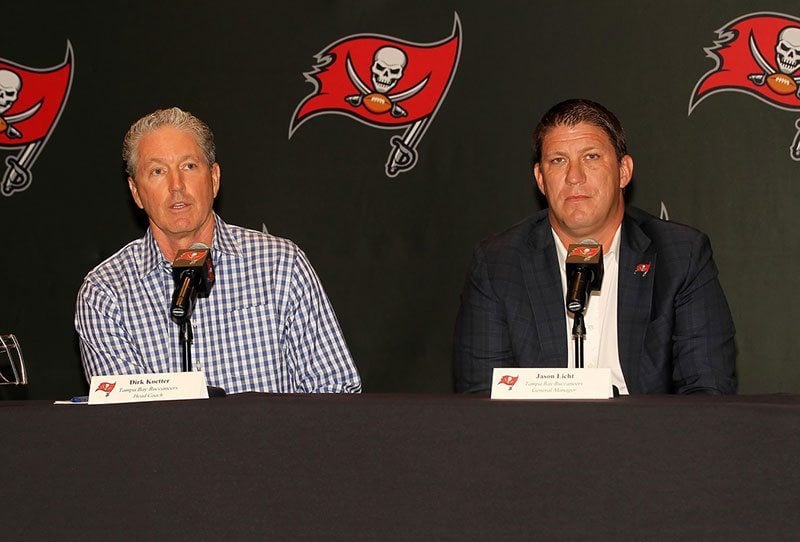 Report: Bucs Exploring Moving Down – Or Out – Of First Round

Home » Articles » Report: Bucs Exploring Moving Down – Or Out – Of First Round

Bucs fans have been waiting since the season finale against the Carolina Panthers for draft day to get here.

And while the annual three-day showcase of the best college players being taken by their future employers will in fact kickoff Thursday night at 8 p.m. in Philadelphia, Bucs fans could be waiting until nearly midnight to know who the newest Buccaneer will be.

Or they may go to bed still wondering.

Buccaneers are talking with at least three teams about moving back in 1st round, and maybe even out of first round altogether, per source.

The 2017 NFL Draft is considered one of the deepest in years at a number of positions, and some believe once you get out of the  Top 15 players, the difference between the 16th and the 100th isn’t a very big gap in talent.

If Bucs general manager Jason Licht is one of those who subscribe to that notion, then trading back could be in the Bucs plans.

Scott Reynolds talked about the trade down scenario a few weeks back in his Fab 5, and broke down the potential benefits and what moving down could help the Bucs gain.

Of course the NFL Draft is unpredictable each year, and Tampa Bay could find themselves with a player they had graded as a Top 10 pick fall into their laps. If that scenario were to happen then they most likely nab that player and worry about acquiring additional picks by wheeling and dealing in the second or even later rounds.

The one thing we know is to expect the unexpected one Roger Goodell steps to the podium tomorrow night.

And don’t plan on going to bed too early on Thursday.

Mark Cook currently is the director of editorial content and Bucs beat writer and has written for PewterReport.com since 2011. Cook has followed the Buccaneers since 1977 when he first began watching football with his Dad and is fond of the 1979 Bucs team that came within 10 points of going to a Super Bowl. His favorite Bucs game is still the 1979 divisional playoff win 24-17 over the Eagles. In his spare time Cook enjoys playing guitar, fishing, the beach and family time.Cook is a native of Pinecrest in Eastern Hillsborough County and has written for numerous publications including the Tampa Tribune, In the Field and Ya'll Magazine. Cook can be reached at [email protected]
Subscribe
Login
Please login to comment
32 Comments
Oldest
Newest
Inline Feedbacks
View all comments

The same conjecture has been said about every single team and GM in the league, i.e., they’re “thinking of trading down”. But in a league where every single GM knows the same data point – the excess of depth at many positions – then it’s a buyer’s market, not a sellers market. If everybody trades down, or wants to, or tries to, then nobody will be trading up. It takes two to tango.

All they’ve got to do is find a team who’s in love with a player projected to be taken in the early twenties… It’s not that simple, but it’s doable. Of course, all GMs are working with essentially the same info, but there are exceptions.

The key difference is that most of those conjectures dont have a report from Adam Schefter saying there are teams interested.

He’s just playing the part of Captain Obvious. It makes no difference who says it.

Good point Naples. Also, if (almost) everyone wants to move down, then teams will receive less from trading back (laws of supply and demand).

This draft is going to be interesting because, like you have said, it is so unpredictable. It will be fun. Go Bucs!!!!!

Yeah baby yeah. I think the QB’s are the wild cards in this draft that are going to drive trades. Since none of them are sure things, And hence not really top 15 picks. Teams will jockey to draft one from 16-25.

Read somewhere that this draft is unique in that there is not much talent differential between the 1st and 3rd rounds. This makes good sense for the Bucs to explore the alternatives…..and there will be interest or talks would not be going on. I didn’t post a final mock because I thought this could happen – almost impossible to mock trades. If QB Patrick Mahomes is still on the board, competition between the Texans and the Chiefs could spark a trade up. Of course anything can happen and of course nothing may happen. It may also mean that the Bucs… Read more »

Hey, it’s smart and makes a lot of sense. Of course, finding a good trade partner, isn’t that the rub? Aren’t a lot of teams looking to trade down in a draft this deep? As for worrying about fan reaction at draft parties? Well, drafting according to fan reaction is probably not a good idea in the first place. LOL
Bottom line, good idea, hope it happens. Sports Legends tomorrow night anyone?

One professional aspect I really appreciate about Licht and Koetter is they don’t seem to fall in love with any particular player in the draft.

But think of the disappointment at the draft parties if the Bucs don’t make a Round 1 pick.

Roberto Aguayo’s selection was the the definition of falling in love with a player cobraboy. But ok.

Winston may have sold that one. I don’t think they are listening to him anymore.

The value difference between last first and a late 2nd isn’t that much. The exception is if a blue chip falls into the late first round.

It makes sense form a value point of view to trade down given you can obtain a few more solid or good players on rookie contracts from a salary cap perspective.

It’s not as huge as a difference as a top 20 pick but I haven’t come across a draft where the last third of the first round doesn’t have more Pro Bowlers selected than the last third of the second round. Good players get taken early, and top picks are far more likely to yield a long term player than a throwing darts as the draft progresses. Teams get praised for taking falling players like Daquan Bowers and Randy Gregory in Rd 2 on draft day, then people forget about them after they flame out for the reasons that they… Read more »

Jason Licht is a disciple of Bill Belichick. What may be happening here is what has been described as “The Patriot Way”. Belichick has little regard for the 1st round. He has already traded out of the 1st round. I don’t know if it’s because he tends to pick last or his method assures that he picks last. Dunno! But pretty sure QB Tom Brady has some bearing on the latter. Anyway to kill time between now and the draft, you may find this to be an interesting read. This is a long read so you may just want to… Read more »

When you have the greatest QB of all time on your roster people want to think that there’s some magic to everything you do. Belichick has run a great program in New England, just like Mike McCarthy (Aaron Rodgers), Mike Tomlin (Ben Roethlisberger) and Sean Payton (Drew Brees), you know it’s really funny how so many good coaches happen to work with the best QB’s in the league like that. I’m sure it’s because of the way they run practices and the draft ;)

You’re making some really good comments since your on screen makeover. Keep up the good work. I like it! lol.

Heavens to mergatroid! Chucky, is it really you!? Come clean devasher. Jiminy Crickets! Are you really the irascible jongrunden from AZ?

You think devasher is actually my friend jonnyg from the desert? What a hoot. I think Naples might really be my old nemesis Bucfan47 from Rocky Top.

We all have signatures and footprints. Without name, you can tell a macabee or scubog post from across the street. If devasher post again, I will post side by side post from both that uses words and phrases unique to jonnyg. I like jonnyg and devasher too. Doesn’t bother me. We can have a little fun with it!

Nobody else in the league has produced anywhere near the same results as has Belichick.

Not New Orleans which had and has Drew Brees. Not Green Bay which had and still has Aaron Rodgers. Not … any … other…. team … in… the… league has produced anywhere near the same results as Belichick.

It is obvious that it takes a helluva lot more than a good or even great quarterback to win. AR has outperformed Brady on paper for years now. But only one ring to show for it vs. 4.

All the other coaches you mentioned do not have 5 super bowl rings. Collectively they don’t have 5.

Unless there is a can’t miss pick available at #19, I’m all for trading down. Lucky for me the draft airs at 2pm in Hawaii so I don’t have to worry about bedtime lol

My hope is either the top four QBs all go before 19, pushing down talent (that is not compatible with us) that someone will want to trade up for; or that the Browns don’t take a QB in the first 18 picks and want to trade up to get their QB at 19. Having 3 picks in round 2 and extra picks to move them around would be as close as one can get to guaranteeing we get the three players the Bucs want.

Mark, just you just put this out for all 32 teams by just changing the name of the team? Yeah, I think everybody wants to trade down for the right price. Here I was hoping you add some actual real news. You got me.

I get the feeling trading down will be contingent on Cook or Mcafferey falling to us. If one is available I think we will take them but once both are off the board my money’s on #19 being traded away.

Si Mike Mayock has is picking Malik Hooker, I like it

Sapp liked it too. He has an affection for hookers.

There’s been reports that I’d like to trade my 60 yr old wife for two 30 yr olds, but I was really hoping someone would move up with three 20 yr olds! What are the chances?

If the 2 30 yr olds like football, take them… Otherwise you will be watching reruns of The Notebook….

Another day, another Mock Draft and more rumors to entertain us. Thank goodness that sometime around midnight tonight the first round speculation will be over and the real mocking will start. Woulda, coulda and shoulda will be the “three little words” most often spoken/written for the next month. Folks, who as John McKay would say, “don’t know a football from a watermelon” will spew their opinions as facts. They will declare players as reaches, busts or future stars before any even step on the field. Posters will go back and forth debating who knows more, when in reality neither knows… Read more »

OK, so I am checking out all the mock drafts and everyone under the sun seems to think the BUCs will draft a RB (Cook) in the first round.

Am I the only one who absolutely hates this idea? The draft is heavy with RBs. I would prefer DE, OT, or Safety long before I would go with a RB in the first. Personally, I would wait until the third round, but second is acceptable. JUST NOT THE FIRST!!!