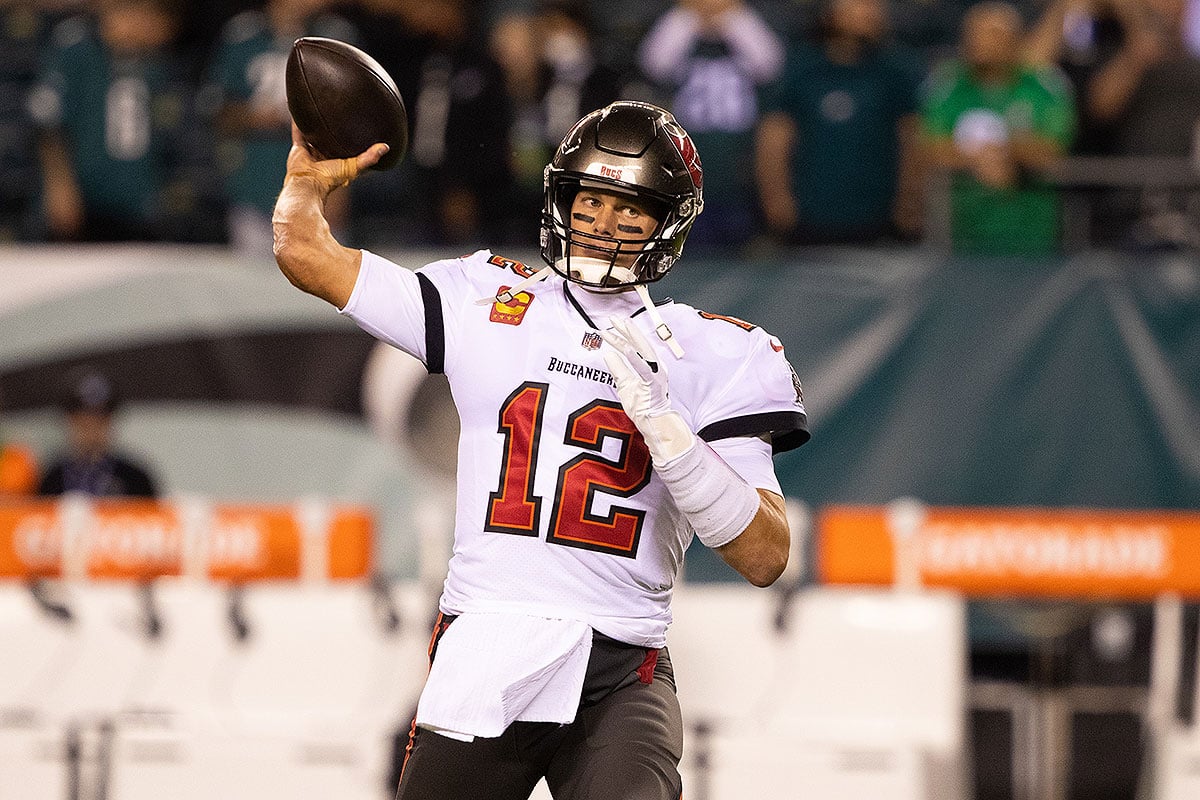 According to NFL Network’s Ian Rapoport, the Bucs aren’t ready to turn the page on Tom Brady just yet. In a Sunday report, Rapoport cited a source indicating the Bucs would do whatever is necessary for Brady to return. Rapoport also says that’s a possibility Brady hasn’t ruled out either. The star quarterback indicated as much when he said, “never say never” about a potential return on his “Let’s Go” podcast.

Despite Tom Brady’s retirement announcement, the #Bucs aren’t giving up hope that he’ll return and play in 2022. And Brady hasn’t shut the door completely, either, publicly or privately.

A look at Tampa Bay’s QB situation from me and @TomPelissero: https://t.co/JJzYOa2Mri

Of course, the likelihood of Brady un-retiring is still very slim. The 44-year old was clear that he wants to spend more time with family moving forward. He also has a plethora of business ventures that demand his time and energy too. But until Brady takes a return completely off the table, the Bucs will hold out hope their most important player returns.

Plan B QB Options For Bucs

If Brady doesn’t come back, the Bucs will be aggressive in pursuit of Plan B options. Rapoport reports that Seahawks quarterback Russell Wilson could be a target. However, the Seattle signal caller has said he wants to finish his career with the Seahawks. The Bucs will also do their due diligence on Texans’ quarterback Deshaun Watson, but Houston’s hefty asking price and Watson’s extensive legal/character issues make a trade very unlikely. At least, right now.

Watson, 26, didn’t play last season amidst a trade request and more than 20 allegations of sexual misconduct that are currently the subject of civil lawsuits, a police investigation and an NFL probe. Watson has denied wrongdoing. The three-time Pro Bowl selection has made clear he won’t play for the Texans again. Sources say Houston continues to target a trade before the league year begins on March 16.

PewterReport.com has indicated for weeks that the Bucs will aggressively pursue the top quarterback options this offseason. Wilson and Watson certainly qualify, but there are complications to both. Either way, if the Bucs intend to make Tampa Bay a desirable destination for a top quarterback – or for Brady to un-retire to – expect to see them fight hard to retain most of their free agents. The NFL world might be ready to bury the Bucs, but Tampa Bay is looking to fight another day.

Wilson would be my pick. Wirfs would be his blind side tackle. We’d be a choice destination for free agents. Great player. And he’s got years left to his career. Just don’t see it happening with salary cap, cost in draft picks, etc. Wouldn’t go near Watson.

Wilson would be my choice as well but I think it’s more fantasy than reality. Hypothetically speaking Seattle’s asking price would be at least three 1st rd picks especially since teams were offering that for Deshaun Watson. Then there’s the compensation, Wilson only has two years left on his deal so the Bucs would have to negotiate a sign & trade deal to help with the future cap. That way they’ll be able to put players around him to compete. It’s Fantasy!

Perhaps a potential Power Play by Brady since I have never seen an all time great at the top of his game just hang’em up like this. Maybe he negotiates even more control over the offense as a conditional return and pushes BA/BL to the back however what does he do to solve the defensive deficiencies of Todd Bowles. And before someone disagrees just remember those were his conditions before signing with the Bucs, so its highly likely that’s what’s going on behind the scenes.

I think the Coaches have no problem letting Brady do his thing but with the injuries hitting so hard so early last year they felt they had to do more to keep things rollin and lost site of just keeping things light and easy for Brady. He likes the competition, but he’s too old and experienced to be up for things getting harder. He knows what he brings and what he can do and just wanted an opportunity to just do what he does best. I don’t think the Coaches made it harder on purpose, I just think they panicked… Read more »

There is zero evidence that Tom Brady is engaging in any so-called “power plays”. He has never operated that way, or talked that way, and is not doing so now either.

Brady ain’t comin back. And if he did, He’d be a fool. Thats right, I said it. Stay out on top MR Brady. You are in rare air. Most athletes don’t know when to quit. Brady is the GOAT. Why risk you body for the Bucs or any other team. I do believe we make a play for Wilson. But I don’t see what we have to offer. That asking price will be..real steep. We probably will go with Jimmy G in SF. I think the 9ers would take a 2nd and 3rd pick for him. The fact our Bucs… Read more »

Regardless if he was even cheap No F-ing way Jimmy G could run this type of offense. He was just decent in run heavy offense with stellar defense that didn’t push ball down the field. End of the day he’s not going to be Niner because he’s not good enough. His int’s always come and end of that rams game cost then the game. Gabbert or Trask could probably do better than Jimmy G who also is hurt all the time.

Last edited 4 months ago by fredster

If Brady came back would be this year. Don’t see it happening though. Also he wouldn’t be risking his body for the Bucs. Lol. Give me a break. If he came back one more year it would be to win another super bowl period and for him! It’s hard to go out on top. I’m sure he’s enjoying playing here but make no mistake he wouldn’t be putting his body on the line for the Bucs or anyone other than his own ambition and love of the hand. That’s just silly to say he would be risking himself for Bucs… Read more »

You do realize that this is all speculation that is being reported on. Most of it comes from the belief that “since they are built to win now” that they would pursue another topflight QB. So saying that this tells us “what they truly think about Gabbert and Trask” is just speculative BS on your part. Everything I’ve read and heard from them tells me they are high on Trask. They would probably like to have another year to develop him behind the scenes before throwing him out there, but that’s a luxury that most teams just don’t have. Jimmy… Read more »

Last edited 4 months ago by BucHarbour

Trades are to expensive, and it takes two. Wilson, Carr, are under contract, and I don’t see either club wanting to part ways. Oh sure, let’s trade our frachise QB to the Bucs so they can win another title. Not happening. I don’t believe Arains thinks the FA QB’s available are any better than Gabbert, who at least knows the system, and players. Best thing the Bucs can do is keep their cap down signing Gabbert back up. he most likely starts the season.

Let’s also not forget that the QB draft class this year is terrible. Why would a team trade their QB if they don’t have someone waiting in the wings? San Fran and Green Bay are realistic trade partners because they have the air apparent waiting to play. I am not sold at all on Jimmy G, never have and never will. When his team needs him to step up he folds. That leaves us with Green Bay and Rogers. Would they trade him within the conference? I doubt it. Would he want to come and learn a new system? Why… Read more »

I think the Bucs will tel Brady “We get it that we may have tried to change things up too much due to all the injuries. It’s our job to run things and we realize now we may have made it a little harder for you when we should have made making it easier for you the priority. We aren’t used to having an actual good QB and have always had to try to make everything else good and haven’t had to worry about keeping a great QB happy instead. If you come back we will make it as easy… Read more »

Kinda laughing here. Wouldn’t it be something..after all this talk about Wilson, Watson and Jimmy G, it ends up…..Welcome home Jameis Winston..on the cheap? And yes, he is better than Trask or Gabbert. I would LMAO.

Last edited 4 months ago by BucHarbour

Wilson with his deep accuracy in this offense would be unbelievable.

Nothing but speculation and perhaps a little wishful thinking. I expect these types of stories are going to become even more frequent as the league enters into it’s dead period. Watson is intriguing if his legal issues can be resolved. I loved Wilson coming out of college, but the asking price might make a deal problematic. I liked Jimmy G coming out of college too, but after seeing him in the NFL, he doesn’t look like anything special. If, and only if, the pompous, now retired Sean Payton, corrected Jameis Winston’s penchant for throwing inopportune INT’s, I’d love to see… Read more »

I am not at all surprised that the Bucs would not try to cut a deal with Seattle for Russell Wilson. They dumped their no. 1 draft pick Winston for Tom Brady a couple years ago, which shocked a lot of people despite Winston’s continued habit of throwing the ball to the other team. As for those who claim they know the parameters of such a deal, such as Seattle demanding three first round draft picks, well, nobody knows. If Russell Wilson decides he wants out of Seattle, he’s going to get his way, and no, I don’t believe anybody… Read more »