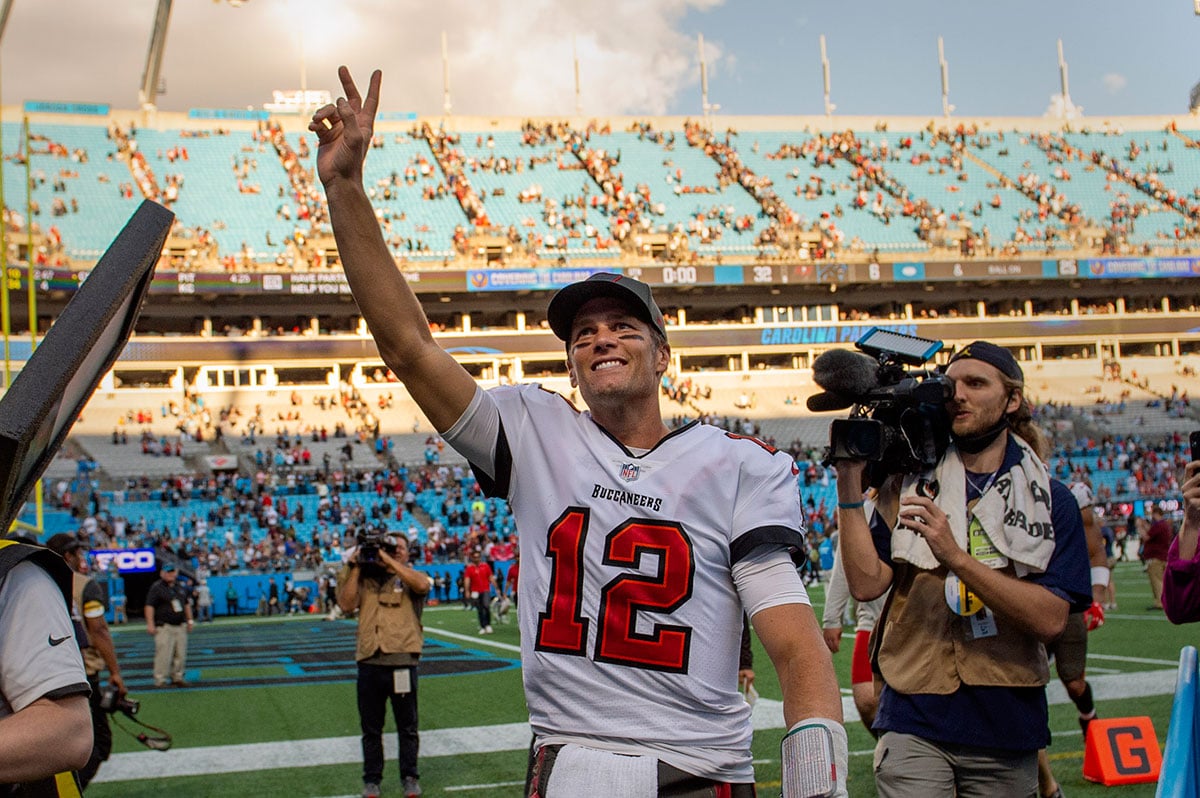 According to reports from ESPN’s Adam Schefter and Jeff Darlington, and NFL Network’s Ian Rapoport, Bucs quarterback Tom Brady has made no decision about playing in 2022. The 21-year veteran has dominated quarterback play in the NFL for over two decades. It’s been assumed Brady would at least play out his contract in Tampa Bay, which runs through the 2022 season. But the two most prominent NFL reporters say nothing has been decided.

Brady leads the NFL in almost every passing category, a testament to his incredible play this season. But the 44-year old could still consider walking away, per Schefter and Darlington.

Sources tell ESPN that Brady is happy in Tampa, while team sources added the marriage couldn’t be going any better from the Bucs’ perspective. Tampa Bay’s coaches and executives are unanimous in their desire to keep moving forward with Brady beyond this season, something they plan to convey to him in emphatic fashion when the season is over.

The Bucs organization would be willing to bend over backward to entice Brady to continue playing, if that’s what he ultimately decides to do.

At times throughout this season, Brady has felt committed to returning in 2022 regardless of the outcome, simply because he feels like he owes it to an organization that doesn’t have a clear quarterback succession plan, sources said. But with a long 2021-22 season nearing its conclusion, Brady now plans to enter the offseason wide open about his future.

Another source close to him said simply, Brady hasn’t considered his future because he’s only thinking about how to win today vs. the Rams in the Divisional Round.

2022 Could Be Final Ride For Bucs QB Brady

Previously, Brady has said he would like to play until he’s 45 years old. He’ll turn 45 in August, shortly after training camp opens. 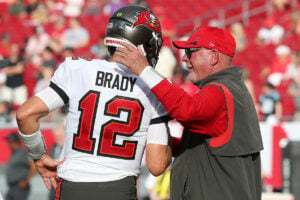 “I felt like then that was a great goal to set,” Brady told Willie McGinest a week ago. “I still have that goal of wanting to get to 45. We’ll see how it goes. I think I’m pretty much in [uncharted] territory.”

If Brady did retire, it would be a surprise to some of his teammates and coaches. When asked about if he’d be shocked if Brady walked away, offensive coordinator Byron Leftwich laughed.

“Tom is playing at a high level,” Leftwich said. “I’ll leave it at that.”

“The way he was at practice, I would be shocked if he didn’t (return),” Arians said. “You know they have that Friday quarterback challenge. He came flying out of the locker room, sprinting two or three fields away. Couldn’t wait to get into the challenge. He was like a little kid. I would be shocked.”
The Bucs host the Rams on Sunday in the divisional playoffs. Could that be the last time we see Brady on an NFL field? The smart money still says he’ll play one more year, on a Bucs team that should be very good again. But Brady is in unprecedented territory. All we can do at this point is wait and see.
Previous
Next

If I was a gambling man, I would put my money on Brady returning for one more year. With Brady being the competitor he is, it seems like if the Bucs win the Superbowl this year, he would probably want to see if they can three-peat. If they lose in the playoffs, he might want to comeback to try and go out on top with a Superbowl victory. In truth, I like his mindset, in that, today, he is only focused on beating the Rams. Go Bucs!

You don’t get it. For Brady it’s about the competition and his performance related to the teams success. He’s still performing better then any possible alternative. He’ll play next year with a hope of winning a Super Bowl but more importantly he’ll enjoy the competition and his contribution toward it.
It’s a team sport. The Bucs won last year not because of Brady they won based on defense. Brady gets it all and thus the Super Bowl will be the last of his considerations. The potential to win and his ability to contribute toward it the main considerations.

Playing until 50 isn’t happening lol. That said I doubt he retires this year.

Do we really need these kind of reports on the day of the divisional round?
There is a game to play today and this kind of bs should wait till the season is done. No need for artificial distractions.

Yeah I thought that as well- how about reporting more on the likeliness of Wirfs and Jensen play- give us something relevant to todays game.

thats true but you know how it works, other outlets will be all over this and Pewter Report has to at least give us their take. They left it on the right note to calm everyone down. He’s onky
He’s happy here and he’s only focused on the next game.

Totally agreed. How can anyone run out of things to write on a live or die game day.

You’re correct of course and the Bucs lost. Not are you ready to talk about it?

Very good [email protected] I think if he loses today- he’s more prone to want to come back- if we win the SB again this year and win back to back- he may ride off into the sunset. Ultimately I think he stays atleast one more year- not until 50 like fredster put it but atleast one more year – let’s just say he does walk away after this year- do we try to pull Aaron Rodgers away from GB where he’s already frustrated? And lose a HOF QB for potentially another one? Or do we go after someone like Deshawn… Read more »

OK so that didn’t happen.

I don’t think this is news. He is at the age where retirement could be at any moment. I feel like he’s a bigger figure than anyone else has ever been in football and would like to think that he would make it known what season will be his last and dedicate himself to a final all out season and give people the chance to prepare for his exit and celebrate him if they want to. He’s like Jordan, the NFL itself wants him to stay because once he leaves it will take a big hit. There’s a chance when… Read more »

Finally a good response. Brady is addicted to the competition. He had a great season. On what planet would that be reason to retire.
Brady’s and the Buc’s Super Bowl time is over. The fact it happened once is a once in a lifetime event. It’s all gravy from here on in.

If he does leave looks like a lot of big names out there to possibly replace him. Rodgers, Wilson, garrapolo. None up to his level but pretty good for the Bucs.

Garoppolo is of course his understudy at New England. But most of this QB need masterful coaching scheme for them to execute. Brady can be his own coach on the field. We don’t have masterful offensive coaching staff

He’ll be back because he still has juice in the tank. The Bucs will have another good draft to become even better. What player wouldn’t want to be part of another run at the SB? In a positive note about the injuries as to the coming 2022 Season, we are seeing who has come forward and who hasn’t. I do believe in this coming Season Kyle Trask will be given a chance to get some playing time to see where he is as to NFL ready. I believe 2022 we will be one of the top 4 teams again.

It doesn’t matter right now, lots of variables. How he plays and leads them today does. Let’s talk about it 3 weeks from tomorrow. Just win, whatever it takes! Go BUCS!

To me last year would have been the perfect time “to drop the mic” as they say. Leading a lowly Bucs Bunch to the SB, 1st home team in history to win, oldest SB MVP. There was really nothing else left to play for other than the Love of the game. Personally I don’t think Brady really knows when or how he wants to finally “Exit the Arena”.

Reporters have been sitting on this story to release it at the right time. It’s really a interesting story since it’s Brady, it’s the playoffs, and it could be his last game. Brady knows how all of this works better than anyone and could’ve avoided this from being a story by publicly commenting about his future. Brady’s silence is what makes it interesting. ie (Drew Brees)

It’s unfortunate that voters of MVP don’t take an Holistic view when voting. So many of the published articles indicate that it is a foregone conclusion that Rodgers has won the MVP this year, when obviously TB has put up substantially better statistics (including wins once you include the playoffs). Football is a team game… and TB has proven he is a team player; from the fact that TB (the goat), never has the highest income among the QB’s, as he knows he needs support. Rodgers salary to date (having played fewer years) tops $260M. TB gets his 3rd, 4th… Read more »

All of us want to see Brady win the MVP but the legend of The Goat goes beyond individual stats: The Tuck, The Viniterri kick, the Malcolm Butler int, the 28-3 meltdown. To Brady’s credit he has managed his success way better than Aaron Rogers who seems to stick his foot in his mouth every time he opens it. No one would argue that if Brady & Rogers traded places that he wouldn’t have enjoyed the same successes but Rogers is diva that requires a lot of maintenance.

I’ve raced stock cars. It’s illogical to do it being so expensive but it becomes an addiction and you spend your entire existence focused on it.
Brady has no reason to play next year in spite of the cost to his body and family. He will because he is addicted to the sport and last year turned in great numbers.
You can take that too the bank.

Other things may determine Brady’s future. Gronk? Suh? The Buccaneers can’t possibly resign the majority of their free agents. Assuming they put the franchise tag on Godwin. Suh, Gholston, OJ, Brate, Bernard, JPP are almost certainly gone. Jensen must require a cheap contract or he is gone. Fournette and Gronk can do what they want. The Buccaneers next year look to be a wild card at best next year. Radical idea: trade Brady and Gronk to Denver for future picks.