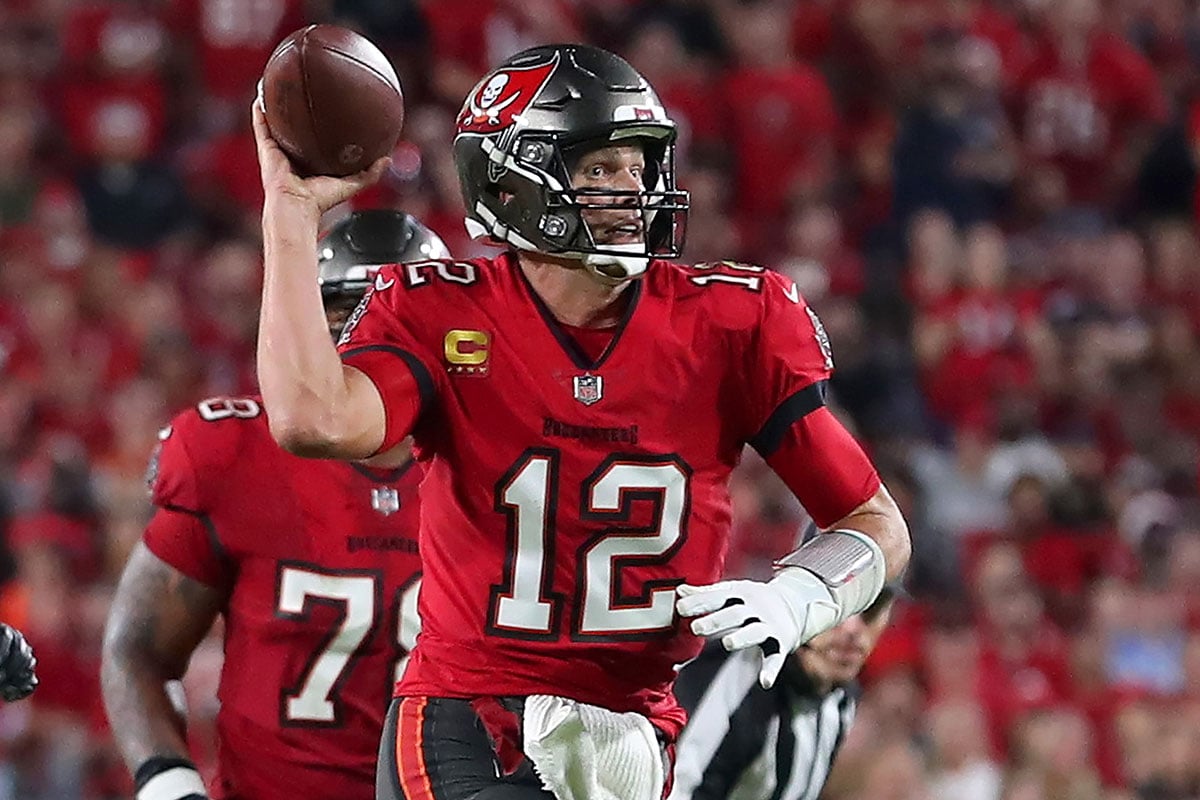 Bucs quarterback Tom Brady wasn’t retired for long before the rumors started about a potential return. Was Brady’s retirement truly legitimate? Would he reach the summer months and long to be back on the gridiron? According to NFL Network’s Mike Giardi, several people close to Brady in Foxboro doubt the star quarterback is truly finished.

“I’ve talked to a couple people who were with Brady in Foxboro, who know him very well,” Giardi said. “And they said, ‘I don’t believe for a second that he’s done’. I think the way things got handled a couple Saturdays ago, with the retirement. That sort of leaked out early. He shamed the media, then the next day he retires. And it was very clunky. A lot of people feel like he was almost forced in that direction, but he doesn’t want to go in that direction just yet.”

Unpacking Giardi’s comments is interesting. It’s illogical to conclude Brady was “forced” in any direction by media reports. If anything, the quarterback would have had more onus to announce a return after Adam Schefter and Jeff Darlington reported on his pending retirement. There is no correlation between their reports and the decisions of his personal life. Brady made the decision to retire with his family, regardless of what the media was saying.

However, I do believe Giardi’s report that people close to Brady doubt the legitimacy of his retirement. It’s important to note that this speculation was always going to happen when Brady retired. Especially when he was playing like the NFL’s MVP. But there has been no indication from Brady that he plans to return.

Sure, the quarterback left the door open for his mind to change. But he’s also reiterated several different times that he’s “happy” with his decision. That doesn’t mean he’ll feel the same way in June or July, however. Until then, we will keep monitoring the GOAT’s absence from the game.

You are just throwing Gossip out there “some people say Jon”. Did he just not state the opposite again for the third time or more? If you haven’t talked to Brady, then, stop the gossip. This isn’t news reporting Jon. Live the man and his family alone and let them enjoy their life.

Can’t wait for next season to start this Brady speculation is exhausting so ready to get past it and get into the actual season.

Tom Brady is not a child, given to fits, il-considered decisions, and then walk backs as some other star players have been at times. If he wants to unretire, OK, but the Bucs have to move on assuming he’s gone for good. TB-12 retiring then unretiring months later – this summer, as one “insider” said above – would be extremely unfair to the Bucs as a franchise, and unfair to his fellow teammates. That just does not fit how Tom Brady has ever behaved in his entire NFL career.

“Until then, we will keep monitoring the GOAT’s absence from the game.”
Please, let’s not. The only thing worth monitoring is Brady’s own words, when he says “I’m playing in 2022.” Everything else is speculative bullshit. Like literally made up nonsense… feeding the beast of the NFL industrial complex. Just paying the bills, with click-generating crap.
innocent statement -> 1 rumor -> rumors about the rumor -> fact
And yet, nothing has changed. Just more bullshit generated.
He’s retired. Until/unless he publicly says otherwise. Period.

Let it go already! Brady is retired! He’s 44 years old for Christ sakes. Hoping, wishing, spectulating about him unretiring is just waste less nonsense. Move on already. No more articles about a 44 year old Brady coming back. It doesn’t help the fans or Tampa Bay to keep talking about Brady. Thanks for the precious memories bro, but it’s really time to move on! We need to prepare our team for this next season. I’m sure if Brady were actually coming back, the Glazers would be the first to know as the team is making plans to address that… Read more »

You hit it right on – wishful thinking. It’s human nature to not want to let a good thing go… to fantasize that it’s not really over. Wake up people! It’s over. He IS retired and there is VERY little chance that he comes back. (Only if a perfect scenario sets up. I don’t see him playing again, unless it is for a short post season run under VERY favorable circumstances. Even that may be wishful thinking on my part!)

He ain’t coming back! He’s already enjoying some key lime pie and other foods that he forbade himself from eating while he was playing. He’s clearing enjoying his retirement and he has many business ventures to keep him busy. Oh yea, and he’s married to a super model. More money than God between them both. Why would he want to come back? There’s car pooling and his children’s games to attend.

This is ridiculous. People close to brady say he’s retiring. Then people close to brady so they don’t believe it. I believe what I hear from the goat. He never once said retirement, but I don’t think that means he’s returning to playing football in the NFL anytime soon. I also agree that the media kind of forced brady into an announcement before he was ready, but it doesn’t change the outcome

These two have to happen for Tom to play one more year:
Wait till he is tired of being Tom Bunchen without football, and
When Tampa fix whatever the problem that was causing the tension

I’ll believe it once he signs his 1 day contract with New England then retires officially. If not with them, then if he files his retirement papers with the Bucs and the Bucs announce it. Only then will I believe Tom has left the building [thank you and good night].

Sorry fellas! But until Brady officially files paperwork he’s not retired he’s still a Buc and so speculation is fair game. Remember Marshawn Lynch tweeted “Deuces” & a pair of cleats hanging from a wire? Well it was reportedly to announce his retirement from the Seahawks all the way up until he showed back up to try and play for the Raiders. File The Paperwork and Shut everybody up TB!

Why can’t people take Brady at his word? Since when is Tom known to say one thing and do another? I believe that he is content with his decision to retire. The only way I see him coming out of retirement is if one of two things happen: 1) The Bucs release his rights in June and the 49ers (his childhood favorite and a very legitimate Super Bowl contender) offers him a starting job; and he truly is itching to “go” again – and Giselle doesn’t quash it. Or, 2) The Bucs retain his rights and have good chance to… Read more »

If Brady is the piece of crap some speculate who they say is forcing his way out of Tampa because of feelings, he’s waiting for the Bucs to acquire a replacement before announcing he’s not retiring. If it happens that way, I hope the Bucs serve him a monster shit burger. Refuse to trade or release him and if he seriously unretires, keep both QBs…whoever the other QB is…unless it’s Wilson or Watson, I guess. In that case, trade his ass to Detroit.

I often get asked, “Scubog, when are you going to retire?” My standard reply is, “When my head hits the desk, and I start to stink”. Like Tom Brady, I enjoy what I do, still pretty good at it, have a lot of valued relationships, and have a pretty wife at home,…….. albeit with an empty nest. I suspect when that day does come, and hopefully still in good health, I could envision having second thoughts after sitting home a few weeks, and perhaps even be inclined to take on one more project. I’m sure there are those close to… Read more »

Man, Writers continue to beat that dead horse to death. Give it a break. Lets go out and get Watson or Wilson.