The Bucs and Future Financial Flexibility The Bucs and Future Financial Flexibility

Tom Brady is back. The Bucs are gearing up to go “all-in” for another Super Bowl run. They are “running it back.”

Insert “we think we can win it all” cliche here.

With the understanding that the G.O.A.T. is not under contract past this year, Tampa Bay is trying to set up the best possible roster for 2022. And the team should. Tomorrow is not guaranteed to us nor is a championship window guaranteed to remain open for NFL teams. 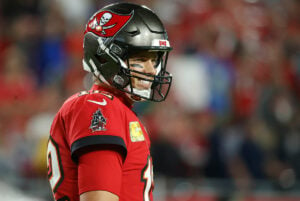 When a team has a franchise QB it should prioritize giving him the best possible chance to get to the promised land.

Now I want to throw another cliche at you, and then I promise I will stop.

Pewter Report’s own JC Allen drives me up a wall all the time with this phrase. He is wrong and so is anyone else that says it. Don’t believe the hype. Now that’s not to say that the cap can’t be managed and massaged to serve a team’s goals. Some goals are short-term – like the Bucs trying to win it all again this season in what could be Brady’s final year in Tampa Bay. While others are looking at a longer-term plan (cough, cough, Houston).

In order to maximize the team’s roster this year the Bucs are pushing money to the future. But how will that affect their ability to field good teams down the line? In NFL circles you will hear the term “mortgaging the future” when teams start pushing money – in some cases dead money – to future years. But what does that really look like?

There are four groups this falls into. First are prorated bonuses. Second are rookie salaries that are fully guaranteed. And also the league minimum salary for any veteran player with a fully guaranteed contract. Third are any dead cap penalties assessed to a year based on void years in contracts that are being moved off the books.

The rest of salaries, bonuses, currently sitting on a team’s cap can theoretically be moved to a future year or potentially terminated altogether.

Tampa Bay currently has $240,028,462 in cap liabilities covering 40 players for 2023 per Over The Cap. That’s not good when you consider the salary cap is currently projected around $225 million next year.

This is where fans start to scream, “The cap can’t be real!” But again, many of these cap figures can be cut, or restructured to create more room. So how much room could the Bucs theoretically create? Tampa Bay can take its cap liabilities down to just over $129 million if it were to restructure all of the big investments and cut everyone else that would give the team some cap relief.

However, that would leave the Bucs with just 11 players under contract and only $96 million to fill out 42 roster spots. That’s unlikely to say the least.

More realistically, the team can restructure most of the aforementioned big investments with about $159 million in cap hits across 36 players.  This would leave the Bucs with about $66 million to bring in 17 players. That is plenty of flexibility to allow the team to maneuver in all sorts of directions.

Yes, the salary cap is real.

And, it can seem complicated.

Yes, the Bucs are “kicking the can down the road” (sorry, I had one more cliche in me) during this Super Bowl window.

No, the team is not doomed financially next year.

The Bucs will need to be smart as they have been in years past to ensure they continue to balance talent and cost. Rest assured Jason Licht, Mike Greenberg and the Bucs front office are well-aware of the flexibility they have in 2023 and beyond.

It’s real money which still have to be accounted for. The projections for Inflation in 2023 is projected to be the same or higher than 2022; if not, then hello major recession. Best to feel the pain now and get it over with as soon as possible. Costs are going to be higher; that’s why the rate goes up; not to delay feeling your pain that is well deserved. Feel the Pain! Then don’t listen to the use other peoples money crap because you can’t when there is a salary cap. Feel the pain and make sure it doesn’t happen… Read more »

Scubog, it’s been a long time since we have disagreed. Using other peoples money works if you are already rich; if you are poor, it’s the kiss of no future unless one lives below their means and then there is a future. It has much to do with the cost of living; I guess we come from different sides of the business world and thus we see it differently.

Horse: I have no idea what point you’re trying to make. I’m just saying the salary cap is based on the NFL revenue sharing and nothing to do with being a “cost of living” increase. Our tax system is a topic for another day, but I know this much, I sure pay enough and likely so did you.

What a strange take, just a generally weird place from which to come at this question. No, the rise of the NFL salary cap does not have anything whatsoever to do with general inflation. As for when we should “feel the pain”, the only clearly incorrect answer is “this year”. If the team sees an opportunity to make us better for 2022, at the cost of future salary cap dollars, then they take it. This is truly a no brainer. Why? Because right now, we have a team quarterbacked by Tom Brady. Next year, and for all years after, we… Read more »

Thanks for explaining it so well. Each year is a different challenge, but the goal should always be to win a championship, by virtually any means. I sure don’t want my retort to be “Well, we have a lot of cap space…….so there!” when sitting in the stands next to a Rams fan whose team is whipping our ass, but spent future dollars to acquire current talent. What’s that old saying, “The future is now.”

Agree, the cap is NOT a myth. We all know that the people who bellyache the most when they don’t sign some big name free agent would be the same people who would complain if the dead cap obligations handcuffed them in signing players in future years. Also, those who say the cap is a myth don’t seem to care about the reason why there’s a cap to begin with — to promote competitive balance so that teams can’t just go out and buy the most talented team every year. The NFL is much better and more interesting when teams… Read more »

What difference does next year’s salary cap make. If Tom doesn’t return to the Bucs they can kiss any SB chances goodbye.We will once again being looking at Trask or Gabbert at QB. Good gawd.

Well, if you wanna handcuff your ability to sign another QB or other player to help you win in subsequent years, go ahead – jack up the books as much as you like… Like I said, the people clamoring for irresponsible spending will be the first to complain in the future if the cap is totally jacked up and prevents us from spending then. And it’s no guaranteed return to mediocrity when Brady leaves. Perhaps Trask becomes a legit NFL QB or they find a free agent or draft another QB to win with. The pessimism surrounding this team in… Read more »

The blind long term optimism despite 55 years of being the losingest franchise in professional sports is what’s astounding. Look, I’m not saying that we’ll suck for another decade or more once Brady leaves. Not at all. But you get while the getting is good. Your generalization about people who want us to minimize cap costs today by borrowing from future salary caps is just that – a generalization. An assumption. Nonsense, thrown out into the wind, no more substantial or real than a puff of smoke. Maybe some would, I’m sure. A lot of people are idiots. I can… Read more »